Without saying much at all, Intel has officially announced their 8th Gen Core Family which will be known as Coffee Lake. The latest processors in Intel's mainstream family will be launched on 21st August.

The launch comes just a day after Intel had announced the full specifications and launch dates of their high-end desktop focused Core-X series processors. According to the announcement, Intel is going to debut their 8th Gen Core family on 21st August in a Facebook livestream which everyone can tune into at 8 AM (PDT). Following is the press release straight from Intel:

On Aug. 21, Intel will unveil the 8th Generation Intel Core processor family on Facebook Live. Watch as two exciting moments align: the Great American Solar Eclipse and the unveiling of Intel’s most powerful family of processors for the next era of computing. Hear from those who are at the center of creating this technology and from creators who are using the power of 8th Gen Intel Core technology in new and exciting ways.

Eight Reasons to Tune In

Watch the Live Stream: Tune in live on Intel’s Facebook page or the Intel newsroom

There isn't much to talk about aside from two interesting things. First, Intel is going to make this launch a public focused event. They want consumers to see what their 8th Gen family has in store for them and how they offer better performance compared to last generation processors.

Intel has also started to showcase several demos of the 8th Gen processors and various system designs so we are not only looking at a CPU launch, but we can also expect new OEM notebooks, desktops and various other devices on stage. Lastly, Intel tells us to "See how the 8th Gen Intel Core processor is designed for today and what comes next". This could probably be a hint at the future roadmap from Intel to show a proper product plan to the audience to clear what Intel is going to offer in the years ahead. For details on the upcoming Intel 300 series platform that will support the 8th Gen Core processors, head over here.

Well, I didn't point out that this post would include two parts. I usually keep the leaks and rumors out of the official posts but this one is pretty much legit. Coming straight from Videocardz, we are looking at the first detailed specifications of Intel's 8th Generation Core processors for the desktop platform. There are also some performance numbers but we will talk about them in a bit.

The Intel Core i5-8600K is the second unlocked chip in the lineup and features a hexa core design. We have learned that Intel Core i5 series will stick with 6 cores but they will not feature a multi-threaded design. The chip probably features 9 MB of L3 cache while being supported on the LGA 1151 socket.

The Intel Core i3-8350K might be the only Core i3 chip in the 8th Gen family that enables overclocking support. Intel's 8th Gen Core i3 family is also the first to feature 4 cores and some chips will even come with multi-threading enabled which will be a great deal for budget builders. The Intel Core i3 8350K comes with 4 cores, 8 threads that are clocked at 4.0 GHz. The chip features 8 MB of cache and will feature a TDP of 95W.

There's also the Intel Core i3-8100 which is a 4 core, non-multi threaded SKU. This chip has a lower clock speed of 65W and features a clock speed of 3.6 GHz. There's total of 6 MB of L3 cache on the processor itself which confirms the exclusion of multi-threading. The Intel Core i3 chips will not feature boost clocks but they will have a more stable base clock speed and we can expect prices of the chips to be in the sub-$200 US range. 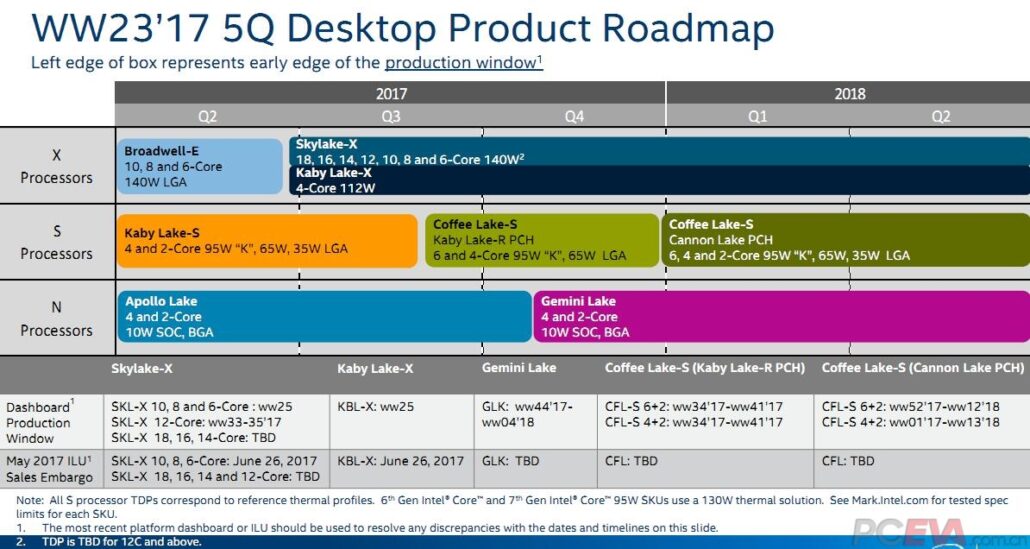 Intel Coffee Lake parts feature the highest frequencies we have ever seen on Intel chips and that's a good thing. We also reported that Intel’s Coffee Lake Core i3 series will be using quad core, multi-threaded designs while the Pentium series will be using quad core, non multi-threaded SKUs which will boost the performance on the budget tier chips. Expect more details on the Coffee Lake lineup as launch closes in this month.