When it comes to PC hardware and application processors, Intel is king. The US corporation has been on top as long as memory serves and with its high yields and superior processes has managed to dominate everyone else in the market. Switch to mobile hardware however and you'll see that Intel hasn't managed to fare quite that well in that segment. The company has made several attempts to penetrate the market and while these do come with their own impressive set of offerings, they're quite not up to par. Today Intel's 2016 Tablet chipset roadmap has allegedly surfaced so lets take a look at what the company has planned next.

Atom X3 can be expected to come by Q1 2016, that means we should see the chipset surface around February - March next year. Moving towards the next tiers of Atom CPUs, the Atom X5 and the Atom X7, we see that Intel should be expected to launch them by Q2 2016, which should be June 2016 by the latest. Both the X5 and the X7 are based on the 14nm Airmont, that is based on the Cherry Trail family. They're expected to cater to all devices that require performance lesser than Core M, with the Atom X7 expected to feature frequencies of up to 2.4 GHz, Intel's XMM 7360 Model which comes with LTE-A support on board and 8th generation graphics processors. 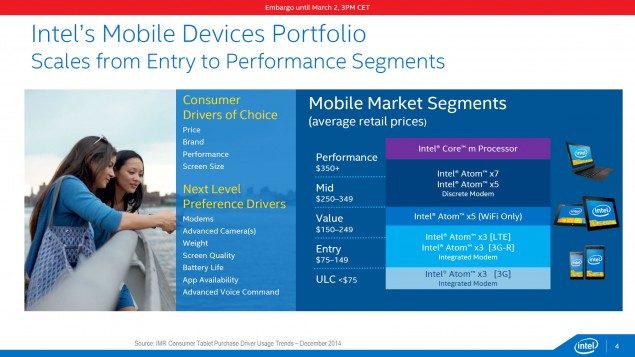 Finally, moving towards Core M upgrades, Intel's Core M5 and core M7 should be expected to come by the end of 2016 according to today's leak. Given the relative decrease in the popularity of tablets, we've seen the tides shift towards hybrids, with the recent launch of Microsoft's Surface Book and Surface Pro 4 and mobility focuses, lightweight notebooks in form of Apple's MacBook Air. When it comes to reducing weight and providing battery efficiency performance, Intel's Core-M, based on Broadwell manages to do quite well for itself.

The sources of today's information expect global tablet sales to stay stagnant, while those of 2 in 1 hybrids are expected to rise. Intel's expected to dominate primarily this segment and perhaps this will be the long awaited entry of the company into the mobile segment. Its also rumored to be manufacturing a mobile chipset in cohorts with LG, though we've got little official information on that so far. Thoughts? Let us know what you think in the comments section below and stay tuned for the latest.