With it being more than a year when we saw the first Surface Pro 4 specifications leak take place, its time for us to finally witness Microsoft's tablet/notebook hybrid. The Surface Pro lineup from Redmond has seen an increasing amount of popularity, particularly since the launch of the Surface Pro 3, so Microsoft's under quite a bit of pressure to make sure the Pro 4 is up to the mark as well. But how well does the device stand up against the iPad Pro, Apple's very own larger screened tablet launched to tackle the enterprise sector in particular? Lets find out below.

In terms of display, the Surface Pro 4 has a slightly smaller display than the iPad Pro, with the device's display size standing at 12.3 inches. Microsoft's further reduced bezel size on the Surface Pro 4, with the device now boasting 5 million pixels across its 12.3 inch diagonal, with a pixel density of 267ppi, that places it in the iPad Pro's ballpark in terms of content quality displayed.

The iPad Pro on the other hand comes with a 12.9 inch screen, with a resolution of 2732 x 2048 and a pixel density of 265ppi. The resolution is higher than the 15 inch MacBook Pro so Apple really wants to you to capture all the details you can with your eyes on the iPad.

As opposed to the Surface Pro 4, the iPad comes with only one screen size, to 12.9 inches are all you get if you're looking at Apple for all your enterprise and other applications this year. While in terms of performance the iPad might have its work cut out for it, both the devices remain in the same category when it comes to display specifications.

When it comes to processors, Apple's managed to significantly step up since last year, with the debut of the A8X on the iPad Air 2, and the A9X on the iPad Pro. The A8X came with a unique, industry first tri-core cyclone CPU, that managed to outperform every similar processor in the market at the time, with the exception of Nvidia's Tegra K1 in the graphics department. Its also rumored with 4GB of RAM on board so multitasking and speed shouldn't be an issue on the tablet.

Its also coupled with a massive 16GB of RAM, so if you're worried in any sense about your next hybrid being overwhelmed by the sheer amount of applications open, you can breathe a sigh of relief. Skylake's also finally made it on board the device, so when it comes to sheer performance and productivity, the iPad Pro really has its work cut out for it.

Given that both of the devices are aimed towards productivity, Microsoft's Surface Pro 4 and Apple's iPad Pro come with their own accessories as well. The Surface Pro 4 comes with Microsoft's Type cover, which has been greatly upgraded since its previous offering. While the Surface Pro 4 is compatible with Surface Pro 3 accessories, the new Type keyboard from Microsoft adds a couple of new and interesting features in the mix.

Not only is the new Type keyboard smaller and lighter than its predecessor, but it also comes with an all new glass trackpad that's 40% larger than it's predecessor and comes with five point multi-touch on board. A fingerprint sensor is also available on the Type keyboard, for US customers only, and the entire accessory will cost you $130. 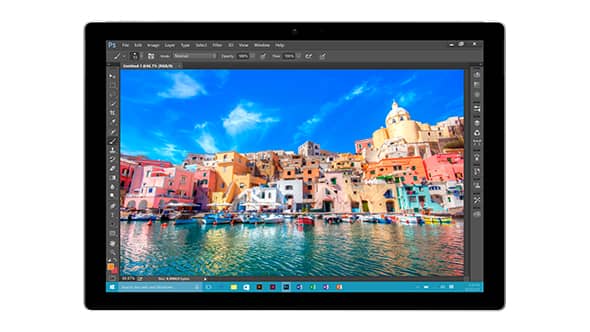 Perhaps the strongest differentiation point between the Surface Pro 4 and the iPad Pro are the operating systems both the devices run. Microsoft's Surface Pro 4 comes with the full offerings of Windows 10, which means better productivity, more apps and desktop grade performance from the tablet. The iPad Pro on the other hand comes with Apple's iOS, which is designed for mobile devices but still comes with its own relative perks on board.

Nevertheless, with Windows 10 you should be getting desktop level productivity from your Surface, which means all programs which can be run on a notebook/PC will also be available for your mobile use. While iOS does come with its own versions for apps such as Photoshop and more, there's no doubt that productivity will be at its highest on the Surface, unless Apple chooses to make OS X compatible for its tablets as well. So if you're looking to get some desktop level work done on your device, go for the Surface Pro 4. It'll give you better all round productivity and performance.

All done with performance and other features, it time to turn towards the multimedia offerings of both the devices. Given the intense need of modern users to capture every moment they deem worthwhile almost every mobile device comes with its own rear and front cameras on board. The iPad Pro and the Surface Pro 4 are no exceptions to this rule, with both the devices coming with 8MP rear cameras on board.

While rear camera specifications for both the devices might be the same, Apple's known to tinker quite a bit with its image shooters and the iPad Pro can record 1080p video coupled with slo-mo and other features. In the front camera department, we see Microsoft's Surface Pro take the lead, with its 5MP front camera, that should significantly outperform the iPad's 1.2MP shooter.

Moving towards the final stage of our analysis, lets take a look at what different pricing and storage options you get with both the devices. The iPad Pro comes with 32 and 128GB variants, that will set you back $799 and $949 respectively. If you're looking to add LTE connectivity to your tablet, then the iPad Pro will cost you $1079 without any additional accessories. Apple's Smart Keyboard adds another $169 to the mix.

Microsoft's Surface Pro comes with much more variations on board, depending on how much money you're willing to fork out. You can choose the processor from Intel's Core m3 to the Core i7, with RAM ranging from 4GB to a massive 16GB. As you move up the processor and RAM chain on the Surface Pro 4, you can also get storage of up to 1TB, which should be sufficient for most users out there. Base storage configuration for the Surface Pro 4 stands at 256 GB, with an option of 512GB available as well.

The 1TB variant of the Surface Pro 4 isn't available for pre-order right now, and the pricing of the device depends on which specifications you're choosing. The base version, with Core m3, 4GB of RAM and 256GB of storage will cost you $899, excluding Microsoft's Type keyboard, which adds another $130 to your bill. You can check out the different Surface Pro 4 configurations and prices here.

When it comes to desktop grade productivity, Microsoft's Surface Pro 4 is the clear winner given that not only does it offer some hardcore performance specifications, but the fact that it also comes with Windows 10's full functionality on board. With the Surface Pro 4 you can switch between tablet/notebook in a heartbeat. Apple's iPad Pro on the other hand takes a more relaxed approach towards productivity, but comes with its own fair share of offerings. While you're still going to need a notebook if you're going with the iPad Pro, with the Surface Pro 4 you can avoid that purchase to some extent.

As always, it always boils down to user preference. If you have a notebook already and don't need any upgrades, the iPad Pro should be a nice option that'll be able to let you review and carry out most of your work. However if you're looking for complete notebook portability, then the Microsoft Surface Pro 4 should definitely be the device for you.