Note: Prior leaks have pointed to the socket being LGA 1200, and these have come from just as reliable sources so we are not entirely sure whats going on with this QS sample being LGA 1159. Take the socket details with a pinch of salt while we figure this out.

Intel's upcoming 10th generation Comet Lake S processors are going to be the crown jewel of their 14nm lineup and manufactured on the 14nm+++ process. Pictures of these CPUs have leaked out on Chinese interwebs and a helpful tipster shared these with us. I believe these constitute the first shots of engineering samples as well as a CPU-Z screenshot of the same. The LGA contact pads can also be seen on the backside of the processor and almost no spare PCB space now remains.

Interestingly, the information we were tipped implies that Intel is considering calling the Core i9-10900K, the Core i9-10900KF. This is something that is in-line with their previous lineup and should help set the 125W TDP part apart from the 65W parts. The company has recently increased the TDP limit of the CPUs from 95W to 125W to allow for higher sustained clocks and even higher "velocity boost" that goes up to an astounding 5.3 GHz on the flagship Core i9 10900K CPU. The Comet Lake S series will feature UHD 730 integrated graphics. The engineering sample in question has the prefix QSRK (qualifying sample) followed by the usual identification marks.

The Intel logo without the words intel (standard for confidential samples) is also present. This normally denotes a product that is in the final stages of specification and is usually where specifications get set in stone. It won't be long before this processor is qualified and media samples start to go out. It seems like we just have to wait a while longer before benchmarks start leaking out. Without any further ado, here are the first pictures of Intel's upcoming Comet Lake S processors:

What you are looking at is actually the Intel Core i5-10400, which has a base clock of 3.0 GHz. The Core i5-10400 is a six-core part with 12 threads (gone are the days of i5 branded parts not supporting hyper-threading) and a boost lock of up to 4.4 GHz. The Core i5-10600K is the highest clocked (read: binned) part with a boost clock up to 4.9 GHz. A CPUZ screenshot of the processor shows that these parts can easily be set to a base clock of 3.5 GHz through overclocking. 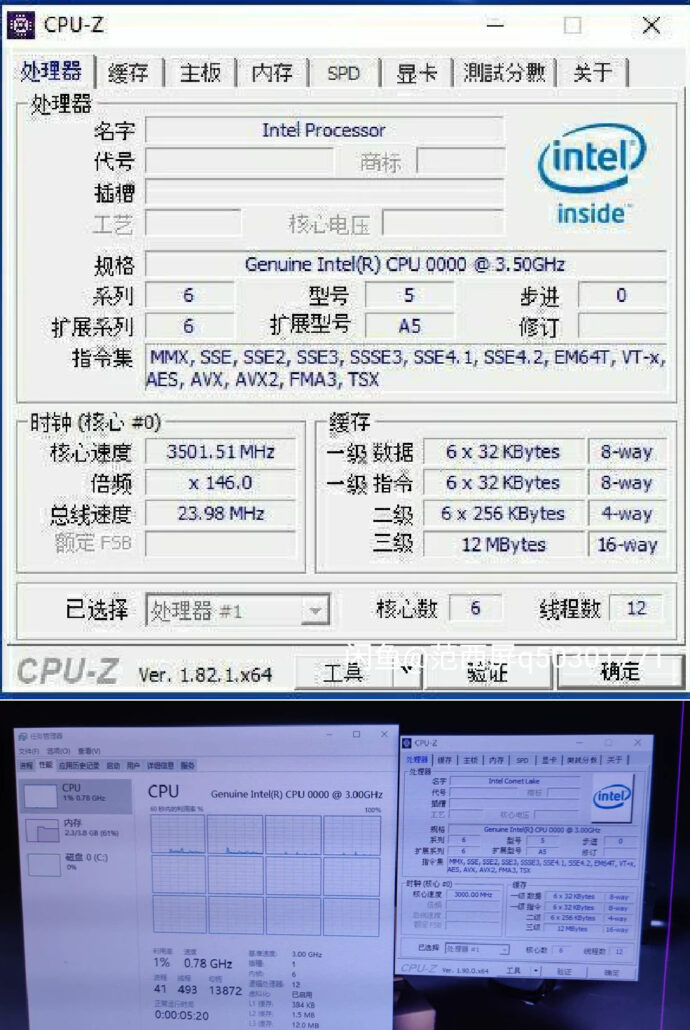 What we know about Intel's 10th generation processors so far