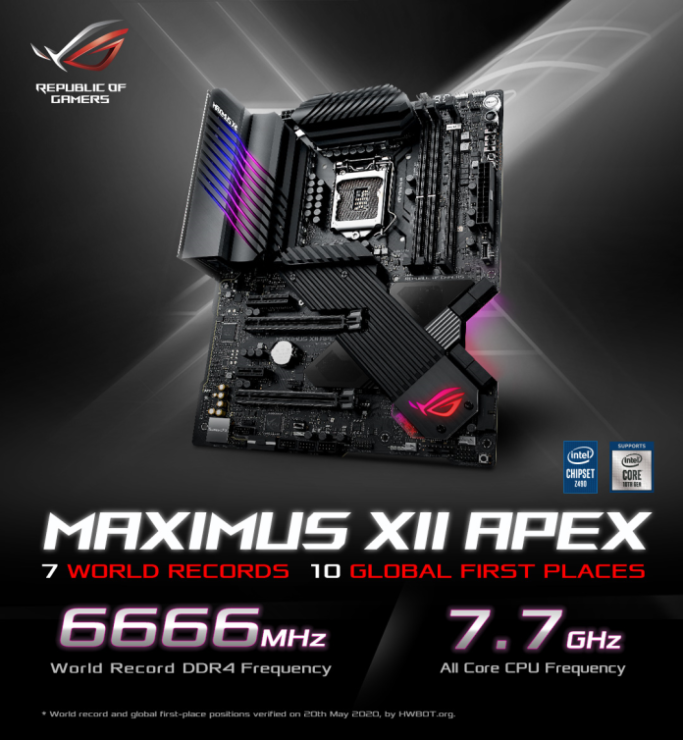 The Intel Core i9-10900K CPU has officially launched today and has already achieved some great overclocking feats. Renowned overclockers from around the world have pushed the chip, on the accompanying Z490 platform, to the limits.

In our review, we have found the Intel Core i9-10900K to be an impressive overclocker, hitting 5.2 GHz across all 10 cores and 20 threads. But unlike professional overclockers who have access to the LN2/LHe cooling apparatus, most tech publications are limited to standard liquid or air coolers. Since LN2 provides temperatures below freezing point, the CPUs can be pushed much higher than on standard coolers.

The first overclock record for the Core i9-10900K has been achieved by Swedish & ASUS's in-house overclocker, Elmor, who pushed the CPU to a blisteringly fast 7.7 GHz (7702.62 MHz) across all 10 cores and 20 threads. The CPU was running on the ASUS ROG Maximus XII APEX motherboard that is a purely overclocker-oriented product. The chip was supplied with 1.194V and the Liquid Helium cooling did a great job keeping the chip under control with such high clock speeds.

You can find the validation link here. Elmor has also submitted a video of the overclocking session that you can see below:

In addition to the CPU benchmark, the Z490 platform itself has achieved the highest frequency world record for memory. The Intel Core i9-10900K was once again used on an ASUS ROG Maximus XII APEX motherboard. The memory used for this record was G.Skill's F4-4000C18-8GTRG.

A single DDR4 stick with 8 GB capacity as evident by the product label was pushed to an effective memory frequency of 3332.7 MHz or 6665.4 (6.6 GHz) which is super impressive. You can see the validation here. Not only that but several of the top memory frequency records have now been achieved on the Z490 platform which you can see in the list below:

These are some super impressive overclocking results, which although not practical or possible for most consumers to ever achieve, do show that these are some fantastic platforms and processors for enthusiast-tier overclockers to mess around with.