Intel's Tiger Lake CPUs, which would be part of the 11th Generation Core family, are expected to launch later this year, bringing in key features such as a redesigned CPU architecture, faster Xe graphics and will be based on an enhanced 10nm process node for optimized efficiency. Once again, an early sample has been spotted along with performance numbers which show a good improvement over existing Ice Lake processors.

This particular chip is still an early sample that features four cores and eight threads. It will be part of the 11th Generation Core family and would be segmented in the Tiger Lake-U family which will feature 15W standard and 25/12W cTDPs. The CPU has a base clock speed of 2.70 GHz and a boost clock speed of up to 4.30 GHz. The CPU also carries 12 MB of L3 cache and 5 MB of L2 cache.

We know from previous reports that Tiger Lake CPUs would carry 3 MB L3 cache per core and 1.25 MB of L2 cache per core. That's a 50% bigger L3 cache and about a 2.5x increase in the total L2 size. The CPU was running on a test platform which is reported as 'Desktop' in the SiSoftware Database, however, Intel's U/Y series processors are based around mobility platforms so the same should be expected from the Tiger Lake-U/Y series chips.

Coming to the performance metrics, the Intel Tiger Lake-U sample posted a score of 401.96Mpix/s in the Sandra benchmark. TUM_APISAK also provided results of a comparable Intel Ice Lake-U chip, the Core i7-1065G7, which scores up to 378.63Mpix/s. Now the performance mostly depends upon the notebook configuration and the variant of the processor itself. Since the Tiger Lake-U and Ice Lake-U chips have configurable TDPs, it cannot be told which CPU was running at what TDP. There are other performance metrics aside from just Multi-Media (SiSoftSandra) where the Tiger Lake-U chip might potentially excel and post bigger gains over the Ice Lake-U chip since it comes with an entirely brand new chip restructure. 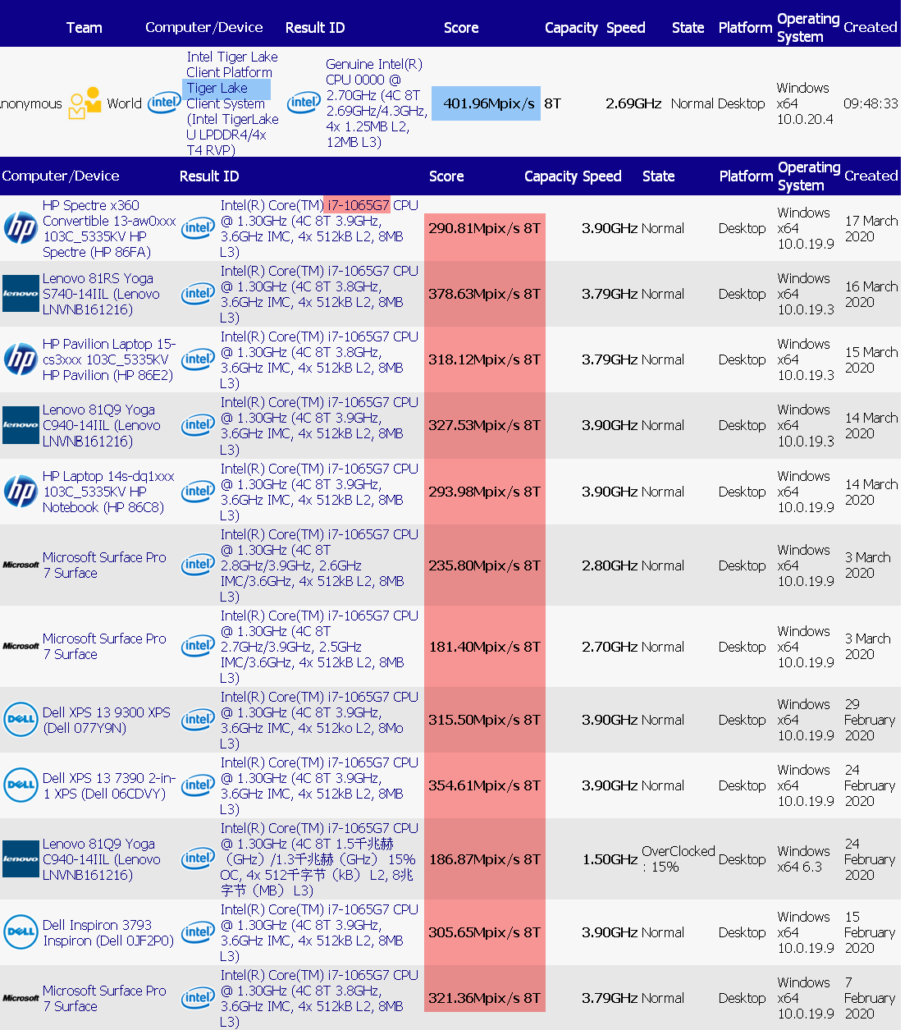 The Intel Tiger Lake-U Quad-Core chip has been benchmarked at up to 4.3 GHz clock speeds. (Image Credits: TUM_APISAK)

If we go by averages of each individual processor to compare against the Tiger Lake-U chip, the Ice Lake Core i7-1065G7 scores around 278.10Mpix/s on average, the Core i5-9300H scores around 306.11Mpix/s and the Core i3-10100 quad-core which is expected to feature up to 3.6 GHz base & a boost clock of around 4.5 GHz in a 65W TDP package scores around 382.61 Mpix/s. This shows just how impressive the score for the Tiger Lake-U chip which should get even better in the final release product.

We have also covered a similar Tiger Lake-U quad-core chip before with up to 4.3 GHz clock speeds. The benchmarks we saw earlier reported a 32% increase for the 15W variant and a 64% increase in performance for the 28W variant over the Intel Core i7-1065G7 (15W) Ice Lake CPU. With that said, the Core i7-1065G7 does operate at slower clock speeds but it goes off to show that Tiger Lake can sustain higher clocks better than its predecessor using the same wattage.