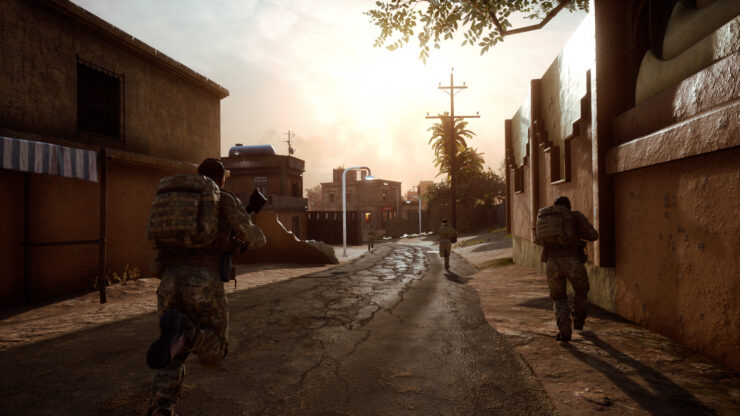 It's been a long time since we got some new information on Insurgency Sandstorm. When the game was first announced, its creative director Andrew Spearin immediately boasted the focus on creating a meaningful single player campaign.

However, a new developer post on the official forums revealed that Spearin is no longer with the studio and the game is now going to be focused on multiplayer, with its story mode postponed indefinitely. The good news is that you can now sign up for the upcoming PC Closed Alpha test right here.

We’ll need to start with some sobering news. Our creative director Andrew Spearin has left New World to pursue other opportunities. Andrew has been with us since the very beginning, co-concepting Insurgency: Modern Infantry Combat with our CEO Jeremy Blum. Released in 2007, the mod won ModDB’s Mod of the Year award. It was the inception of our signature gameplay and style of FPS that our team continues to develop. A love for this kind of multiplayer experience led to the commercial release of a full standalone Insurgency game in 2014, our WWII FPS Day of Infamy in 2017, and our current project Insurgency Sandstorm. Andrew has been a mentor and a friend to me personally, providing guidance when I began full time with the team as community manager. The whole team deeply appreciates his time and contributions to our projects, and we wish him only the best.

As a team we have decided to make some shifts in the direction of Insurgency: Sandstorm. To start, the single player and cooperative story has been canceled for release, and will be considered again at a later date. This is due to its high production requirements and our commitment to deliver to our fans in 2018. The story was a very exciting and new opportunity for us as a team, but we felt we had to make a choice. At this moment it’s more important to us that we deliver a full multiplayer and coop experience that improves on Insurgency; one that is true to our style and what we feel we do best. We know to some of you this decision may be unexpected, and we’re sad to share this news, but this was a shift our team felt we needed to make.

The setting of Insurgency Sandstorm has been developed further. Though we initially wanted to portray particular contemporary real world conflicts, we actually found this approach restrictive of our design and, admittedly, sensitive. Instead, our conflict is fictionalized, but draws inspiration from various modern real world insurgencies. This is in regards to environment, gameplay, characters, vehicles, equipment, weapons, etc. It’s inspiration that is mostly aesthetic and not tied down by any one region. Having this approach allows us to focus our resources on creating a fun and atmospheric hardcore multiplayer experience. It also provides robust options for character customization, post-release level content, community modding, and other aspects.

At this point we can confirm a little more content and what you can expect in Insurgency Sandstorm. The planned game modes for release are as follows: Push, Firefight, and Capture the Base for Versus, plus Checkpoint, Operation, and Outpost for Coop. Push and Firefight are very similar to as they were in Insurgency. Both of these modes will not have drivable vehicles, as we hope to preserve the gameplay of our legacy game modes. Capture the Base however is a more open map mode, one which is built from the start with drivable vehicles in mind. It’s got a bit more of a “Capture the Flag” feel to it (though with very different goals and conditions) and so far has been a lot of fun to play internally. Firefight will also feature a separate 5v5 competitive ruleset with its own matchmaking and ranking system. Checkpoint and Outpost are similar to Insurgency as well (Outpost has seen some tweaks) but Operation will offer a new kind of experience. We’ll be sharing more about that in due time.

Adding game modes post-release is something we are considering. However it is important to us that we do not fragment or separate our player base with too many modes, and that each of our modes offers a very fun and distinct experience. Game mode excess is something we were a bit guilty of in Insurgency and Day of Infamy. Some of the modes felt a little weak or just weren’t played much. This time around, we are more focused, and in the future we can always expand into new game modes if we feel they’re appropriate. As far as platforms go, we’ve decided to delay Mac and Linux support for post-release. We’re finding our time will be best spent on developing for Windows, Xbox One, and PS4. Our priority is to make those three platforms fully functional first, then expand after release.

Fire Support, as many of you know it from Day of Infamy, will be making a return in Insurgency Sandstorm with some improvements. It was too damn cool to not do it. For those unfamiliar, this was the ability for two special player classes to come together and call for air or artillery support at a specific location on the map. It is not a killstreak-driven or point-driven ability; it is a teamwork-driven ability. Fire Support will be balanced appropriately for different modes, so don’t worry about seeing it in things like competitive Firefight (this is for you one-guy-on-Twitter). Expect to see some terrifyingly destructive hardware such as military helicopters, gas attacks, and even nefariously repurposed commercial drones. We’ll also be working on making Fire Support options smoother to select and use than they were in Day of Infamy.

The Closed Alpha for Windows PC is coming soon and signups are now available. We can’t say exactly when it’s coming, but we really do mean soon, so fill out the form and keep your eyes peeled. We said our goal was to have it by the end of 2017, but we felt we’d do well with a little extra time to make sure everything is ready. We have already, however, been doing limited Pre-Alpha testing with some members of our community to good effect. The Closed Alpha will be a stage of development where we select a higher volume of players who can get their hands on the game and help us further with playtesting and feedback. You can sign up now at the link above to be considered for participating. Be aware we’ll only be taking in a select amount of people, likely in multiple waves. But don’t fret if you aren’t accepted. We plan on eventually doing a beta, and will announce more details on that when the time comes. We view the Insurgency Sandstorm Closed Alpha as we viewed our Early Access stages of Insurgency and Day of Infamy: the game is definitely not finished, but it’s in a state where we’re ready for feedback from players. There will be a heavy and steady amount of iteration based on this feedback and our own plans as we work to improve the game for release in 2018.