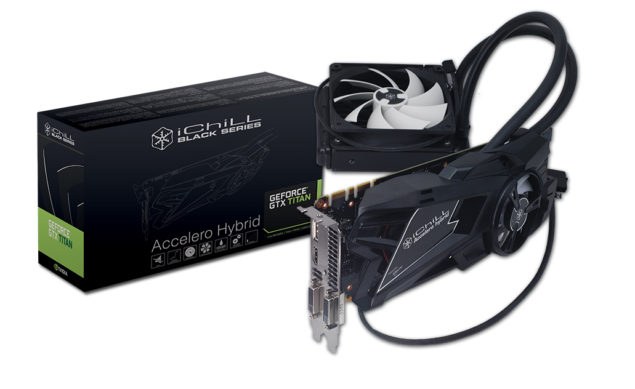 The Inno3D iChill GeForce GTX Titan Accelero Hybrid LCS is equipped with ARCTIC's Accelro Hybrid cooling solution which delivers liquid cooling to the GK110 core of the GTX Titan. The iChill GeForce GTX Titan comes with 2688 Cuda cores, 224 TMUs, 48 ROPs and a 6 GB GDDR5 memory running across a 384-bit memory interface. It is clocked at 937 MHz core and 980 MHz Boost frequencies while the memory runs at the reference clock speed of 6008 MHz (6 GB/s).

The PCB design is kept as reference on the iChill GeForce GTX Titan while the cooler offers more headroom for overclocking. Not much has changed design wise with the iChill GTX Titan Accelero Hybrid, it uses the reference design heatsink with just a ARCTIC Accelero Hybrid cooler strapped on top of the GK110 core except that this wasn’t possible with the GeForce GTX 690 since NVIDIA didn’t allow it. The GeForce GTX Titan reference model which looks alot like the GTX 690 and costs a hefty $1000 has been given the greenlight to be custom made by AIBs which is a good thing but these custom models would just keep adding on the cost for an already expensive yet awesome GPU.

That is why the card is clocked way high to 980 MHz which is almost 100 MHz higher than the reference clock speed of 876 MHz. The Accelero Hybrid cooler equips a cooler shroud that houses the copper contact surface, two coolant pipes run through it to a 120mm radiator which than cool the hot water than supply it back. As for the display outputs, they are stick to the reference 2 DVI, HDMI and a single Display port. Inno3D didn't mention the pricing of the card however it is likely to cost above the official MSRP of $1000. Head over here for more details.