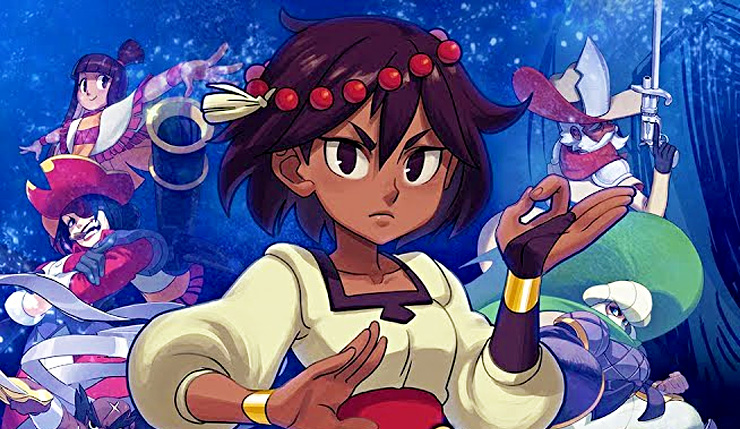 Indivisible may have been the most beautiful game I saw at E3 2018. Oh, sure, there were more technically-impressive games on display, but, artistically, Indivisible’s gorgeously-animated 2D visuals stood out from the pack. Crowdfunded to the tune of around $2 million back in 2015, Indivisible is a new platformer-RPG hybrid from Skullgirls developer Lab Zero. At E3 I got to check out the game’s latest backer demo, which provided the opportunity to play through the Southeast-Asian-inspired Ashwat Forest region, meet and recruit a variety of party members, and take on an intimidating spider boss.

Indivisible plays like Metroidvania-style platformer, but when you touch an enemy, you enter a unique timing-heavy take on turn-based RPG combat. The platforming feels great – on par with other great 2D-animated action games like Hollow Knight or Shantae: Half-Genie Hero. Combat takes a page from the PS1 classic Valkyrie Profile, with each of your four party members assigned to a face button on the controller and being able to attack simultaneously. Indivisible’s battles are even faster than Valkyrie Profile, with a strong focus and combos and juggling enemies in the air. The system takes a few minutes to get used to, but I was already at least semi-proficient by the end of my play session. With 25 party members to recruit, I’m definitely interested to see what kind of unique strategies and combinations will be available.

The demo culminated in a throwdown against a hulking spider named Pindayar. This was a “hybrid boss,” which combine turn-based combat and platforming in a single battle. Basically, you and the boss trade attacks as normal for a while, then it breaks away and you have to dodge a series of attacks until you can land a blow and re-enter turn-based combat. The two types of gameplay don’t mesh quite as gracefully as they could, but the bits of action do keep the boss fight (which was quite long and difficult) from feeling like a repetitive grind. Hybrid bosses could perhaps use a few tweaks, but they’re a sound concept. 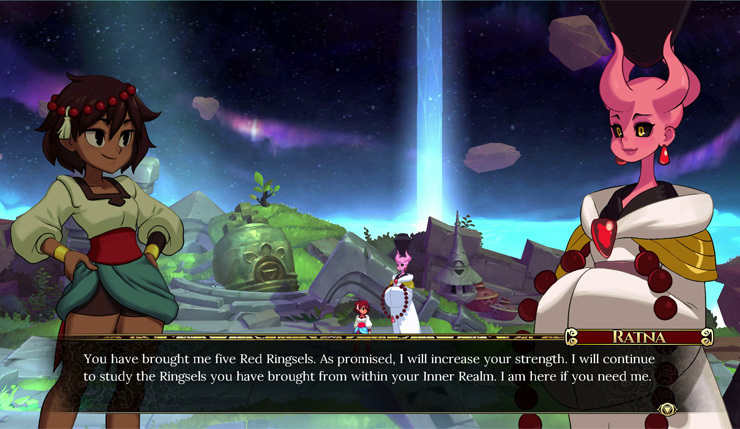 Indivisible is a beautiful game, as was Lab Zero’s previous game, Skullgirls. Of course, fighting games are, by their nature, more limited than RPGs – what were the challenges of making a broader sort of game, while retaining the level of artistry and animation Lab Zero is known for?

Fortunately on Skullgirls, we were able to establish a clear animation pipeline. Our experience from that project really helped us, from an animation production perspective, to put our ducks in a row and execute. Um, that ended up being a slightly morbid metaphor! It's a new genre for us, but we're all really huge fans of Metroidvania games and RPGs and fighting games, so we were able to come together, and really nail down how the systems and philosophies from those genres could meld together into a cohesive whole. We feel like we've landed on a pretty good flow.

It was definitely a challenge to iron it all out, and even now, there are mechanics we're toying with – like, what's the most intuitive way to introduce something to the player? How do you teach them to play without them feeling like they've had their hand held? But it's been a fun process, particularly coming to grips with the scope of the game.

The game will have 25 party members, or…Incarnations? Is that the right term?

Yes, Incarnations is the word we're using. Those are the playable characters. There will also be some unplayable Incarnations, that you'll take with you. They'll live in your little inner realm that Ajna can enter. They'll serve various functions like bringing you up to speed on the story, or upgrading weapons. But, sorry, I totally interrupted your question! 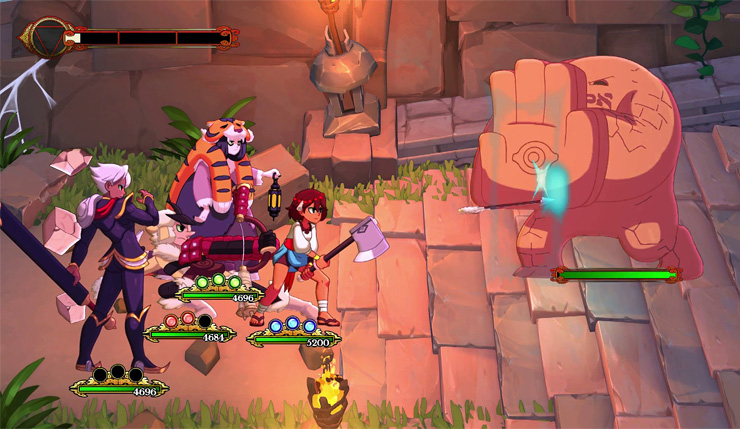 No worries! The character designs for the Incarnations are fantastic. I look at them and immediately want to know more. What's Lab Zero’s character creation process? Do you start with the personality and backstory and design them to match, or do you just draw the coolest characters you can and worry about the rest later?

It's a little bit of both. We have a fantastic team of artists who are super creative, and early on in the project we had a brainstorming session to try and find out what kind of characters we wanted to see. Ones you don't see enough of. Like, you're playing another game, and you think, "Oh man, it would be so cool if I could play as a badass female dragoon!" or something like that. It was a cool opportunity to be, "Man, let's make something cool we don't get to see often!"

Some of it was born of, we need some sort of healer, but healers always look a certain way, so let's try to break the mold a little bit and figure out something more unorthodox or interesting. Sometimes it was just, "Oh, that's an awesome NPC sketch you did, what if that was maybe a full character? Let's explore that a little bit." And our artists are amazing, and have narrowed the designs down to some really, really cool ones. The goal was to vary the cast visually, but also gameplay-wise.

Your main character Ajna is particularly appealing. Skullgirls focused almost exclusively on female characters, so was the goal of Indivisible to make a really strong, iconic female protagonist? Because I could see her being really popular.

Well, we just wanted a character that felt headstrong, but also had faults. So, you don't get to see Ajna's personality too much in the current backer preview, but she's very full of herself initially, but as she goes through the game she discovers her own faults. That's very human to us. We think that particular character arc would work with any visual character design, but we gravitated toward...initially the game's setting was very Southeast Asian inspired, so, as we were going through that, the design of Ajna was sort of a natural evolution.

You’ve said your character progression in Indivisible will mostly come from Metroid-style item collection. During the demo, I noticed I could jump over a lot of the enemies – can you play the game as kind of a pure platformer, without a lot of RPG battles?

You...can, to a degree. There are some enemies that will be harder to avoid in the overworld, especially those that are larger than Anja. For some of the small fry enemies, like the little hopping rice pudding guys or hair monsters, those are avoidable. You will be forced to engage in enough battles that you won't get to the last boss of the game and be incredibly underpowered.

You can avoid doing any of the upgrades. In classic RPGs, beating a boss wouldn't grant you any XP. These days players are used to getting a big, fat chunk of XP whenever you beat a boss, but we're learning toward the idea that the player should advance their battle prowess through the story, rather than the XP door prize for beating a boss.

Sounds like there's some room to play your way. To maybe make the game harder if you want. 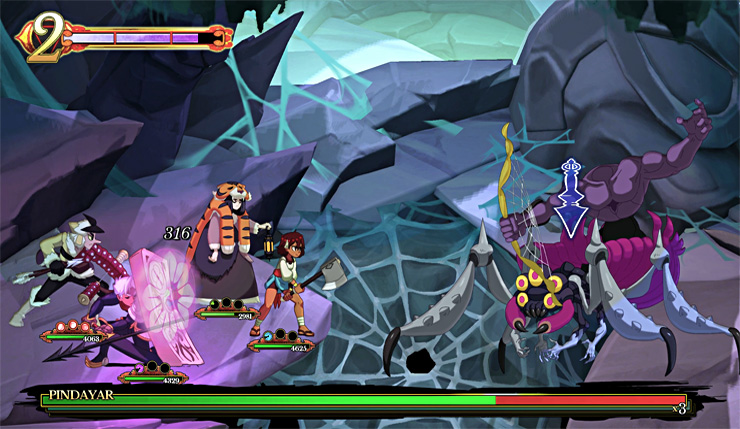 How much fighting game DNA is mixed into the combat system? I was just getting the hang of things, but can you pull off some pretty complex combos?

Yeah, coming from a fighting game background, the whole system is designed to encourage people to knock up the character and juggle. You can attack with any party members simultaneously -- certain attacks will affect how high the enemy floats. One character, she has no attacks, but she's entirely buffs and debuffs, and one of her debuffs is a featherweight type of thing that makes enemies hang in the air for a much longer time giving you an opportunity to juggle. And juggling generates more of your super meter, so you can do more supers and get that whole flow going.

I didn’t quite have that flow down yet.

It takes a while to really grok the battle system, but watching people at E3, how quickly they take to it, has been really informative to us.

The latest Indivisible trailer shows a world map, with about 7 or 8 locations – is that pretty much the whole world, or are there more places to be revealed?

There are a couple spots on the map that you can't see, so it's a touch more expansive than that. There's also an in-game map, that lets you see roughly where you are in that region. Other than that, I don't want to give away too many details.

Will there be a lot of moving between the areas? Lots of backtracking?

There will be opportunities, where, for instance, you may have noticed there's spots where there's a cracked wall, but you don't have the ability necessary to break through there. We reward the player for exploring, so, any time you get a new traversal ability we want you to think, "Oh, yeah, now that I can do this, there's definitely a bunch of spots in the previous level that I could open up." 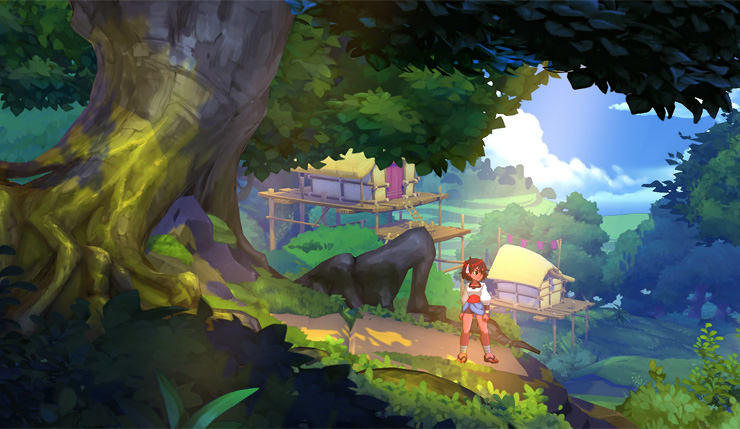 Again, the game looks great, but the story stuff we saw was pretty simple. Will it also include some more elaborate cutscenes?

Definitely. More elaborate than what you saw in the preview, which is mostly the talking heads back-and-forth dialogue. There will be a fully animated intro, that's done by Studio Trigger, which did Little Witch Academia and Kill la Kill, so we're really excited to reveal that closer to launch. There will also be a couple, um...there will be cooler cutscenes, let's just say that. It gets much more dynamic than just the talking heads, before I give too much away.

What kind of resolution and framerate are you targeting on PC/Xbox One X/PS4 Pro? 4K? 60fps?

That hasn’t been nailed down yet. What I can tell you, is as a fighting game company, things running at 60fps is paramount, because timing is a big issue. We'll approach Indivisible with that same focus on smooth, responsive gameplay.

Great, thanks for chatting with me!