In a price range that beats the leading headsets from Sony and Bose, I was a bit skeptical about a new line of headphones called Mu6 coming out from a Chinese firm that I knew nothing about beyond an IndieGoGo campaign that’s still ongoing. I received an early production unit to test out and give my honest feedback on. Truthfully, these have become some of my favorite headphones for traveling with some caveats that could hopefully be fixed with the final product. 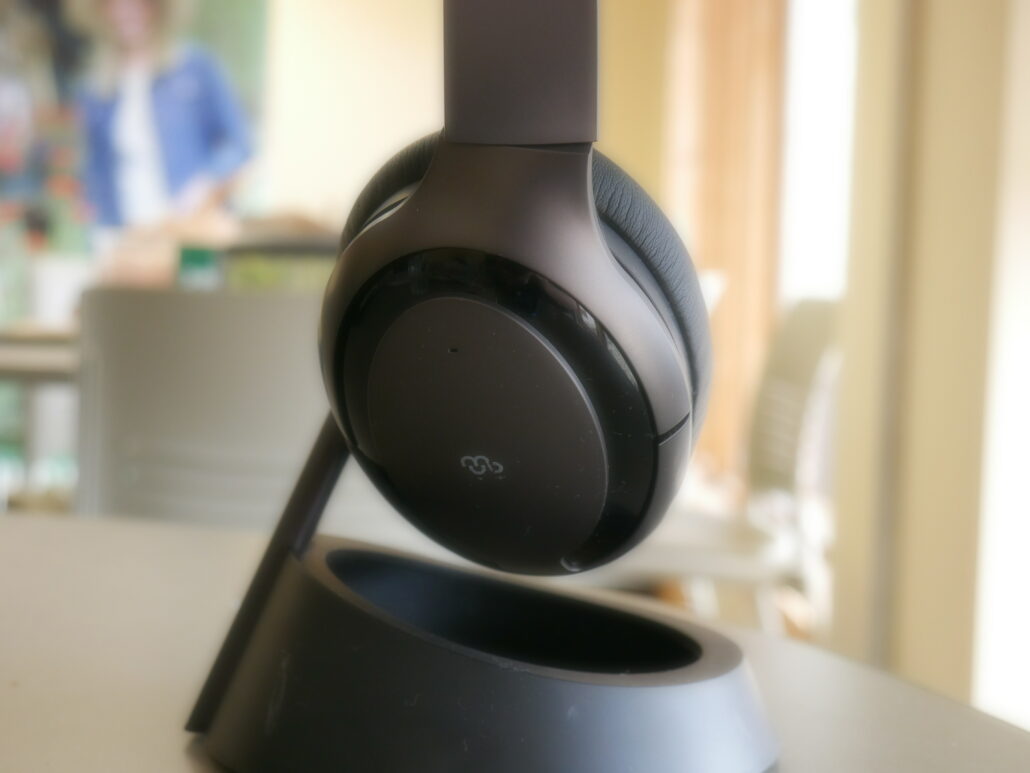 The Mu6 Headphones only offer a single USB-C connection as its only output, but this is merely for charging and cannot be used to transmit audio to your phone. If you pay for the full Mu6 package, you’ll also get a charging stand that can provide a stylish way to hold up your headphones and charge them at the same time. In real world testing, the battery life on the Mu6 Headphones exceeded some of the smaller Bluetooth earbuds I’ve used, lasting an entire trip to San Francisco and back, layovers and relaxing in the hotel room included.

Out of the box, the Mu6 Headphones have a nice balance to the bass and treble without being too overwhelming. Whether I was listening to a weekly podcast or the therapeutic sounds of spa music to catch a quick nap on a plane, the dulcet sounds came through quite clear whether or not I wanted to use the active noise canceling features. Boasting a standard frequency range of 20Hz-20,000Hz and 40mm drivers, the Mu6 headphones are inline with most standard headsets on the market. However, it’s the noise canceling features that truly set these headphones apart from the competition. 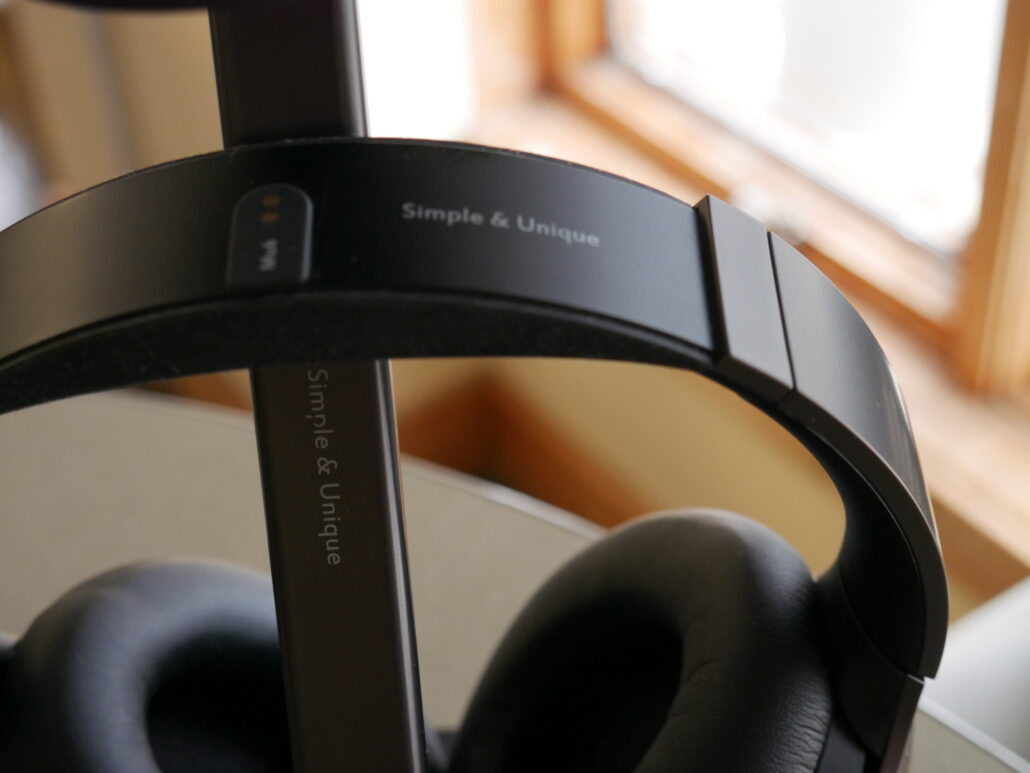 There are three different audio modes to the Mu6 Headphones that vary depending on how much noise canceling tech you want to use. The standard mode with active noise canceling, or ANC On, activate their hybrid technology to cancel out background noise so that you can focus on what’s playing through your headset (more on that in a moment). A quick tap of the ANC button will turn off the active feature, conserving battery life and relying solely on the padded earcups to provide passive noise canceling, and another button press will activate Transparency Mode to let all sound through via the embedded microphones, allowing you to hear the outside world around you in addition to your background music selection.

Adorning the outside of each earcup on the Mu6 are microphones that analyze the outside noise while the active noise canceling works out to negate the ambient noise without compromising on the audio quality. For use around the home, I was able to listen to my favorite podcasts while vacuuming or cleaning up while only a faint whir of the vacuum played in the background of the conversation. In far more noisy environments like the regional airport, more of the noise leaked through but it was still far quieter than the usual pair of padded headphones I pack in my travel gear. The noisy interior of a Boeing airplane was all but drowned out while wearing the Mu6 headphones and that’s even without turning on something to listen to. Even as I write this brief piece, I can no longer hear my fingers strike the keys on my keyboard. The Mu6 headphones can’t block out every bit of outside noise but the multiple noise canceling technologies that work in tandem with this particular set of headphones can make writing in any environment possible by blocking out most outside distractions.

When you have to focus your attention elsewhere, there are two more solutions offered within the Mu6 headphones to hear what’s going on around you. By taking the headset off, a proximity sensor within the left earcup activates and automatically pauses what you’re listening to, starting it back up once again when the headphones are placed back on your head. The other option is to cup your hand over the side of the left earcup. This activates the microphones on the headphones and puts the headset temporarily into Transparency Mode to hear when someone is talking in your direction. These microphones are a bit too effective at picking up noise that they’ll amplify any ambient noise in the room as well. Because of this, I wasn’t a fan of using this feature on an airplane where the constant humming in the air was elevated to an obnoxious volume above what I’d hear without the headset on.

Build quality is another feature on the pre-production set of Mu6 Headphones that leave something to be desired. Each earcup can rotate 90-degrees to lay flat in your bag which is a nice touch. However, the plastic on the current revision of headband feels flimsy and brittle, leaving me to worry that it may snap off at a moment’s notice in the cold or if I flex the headset out too far while trying to put it on my head. When the earcups lay flat, there sounds like there’s an added strain on the plastic pieces of the headband that cause greater concern. I’ve been told that the current plastic molding is only temporary, so I hope that the finalized product will be sturdy enough to be worn for daily use. 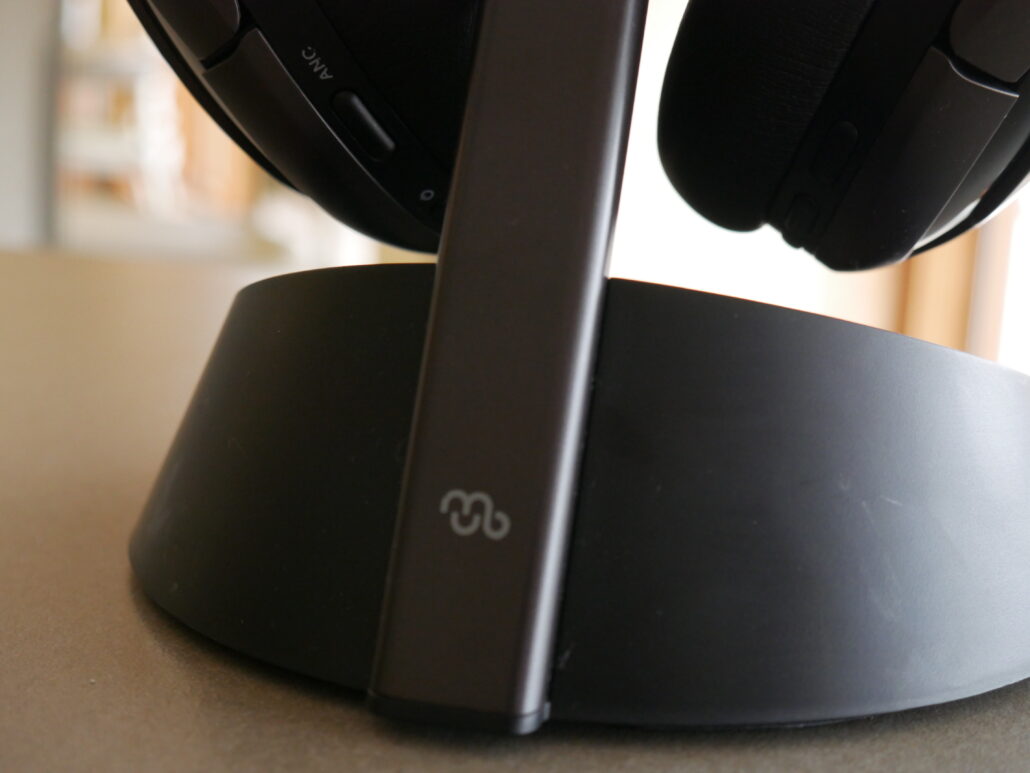 There is a companion app for the Mu6 headphones that can be downloaded onto your mobile device. In its current revision, the companion app only offers a few essential options. The Active Noise Cancellation technology can be stepped down and toggled between ‘Quiet’ and ‘Very Quiet’ modes depending on your personal needs. On the second menu is a basic equalizer that hides an important function.

In between the other stock settings for any equalizer, rock, jazz, and pop lies a custom equalizer setting. This lets the user customize their ‘PERSIONAL EQ’ (their spelling) and tune the audio settings based upon the golden curve. After a simple audio test that has the user indicate when they head tones at specific frequencies, the Mu6 headphones are programmed to compensate for any hearing loss and help the end user enjoy the upper register of their listening experience. Truth be told, I would have liked to see this custom equalizer be the first thing that the user sees when using the Mu6 headphones for the first time, as I went nearly a month of use before discovering this option existed.

The Mu6 headphones have become a required addition to my travel bag when it comes to flying out for conventions. While they might not fold down for easier travel, the unique features are undoubtedly the best part. Just about every electronic device I have in the arsenal works with the Mu6, whether it’s my phone, tablet, or PlayStation Vita. I did discover issues with swapping around between multiple devices that had previously connected to the Mu6 headphones as the headphones always wanted to reconnect to the last device I used, but simply unpairing the headset from my platform of choice and double-tapping the power button to put the Mu6 into pairing mode was a quick fix. My preview unit didn’t come with a travel bag, but if you can get one with your pledge tier on the IndieGoGo campaign, I absolutely advise picking it up.

At a price nearly half of the bigger name brand noise-canceling headphones, the Mu6 hold up surprisingly well. There are still some kinks to be worked out before the Mu6 headphones are ready to reach the backers but I'm already impressed with the audio quality. Who knew that active noise canceling technology that rivals the premium Bose models could be easily achieved for under $200?

We'll check back for a full review once the final product is available.

KEF Porsche Design SPACE ONE is on Shell Shocker deal for 74% off!!