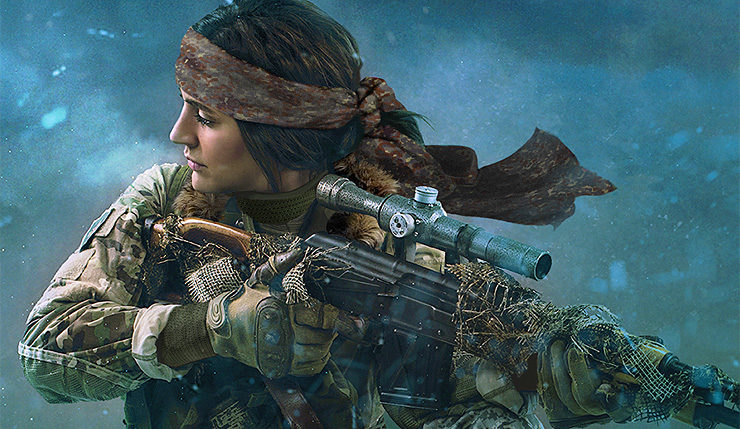 Sniper Ghost Warrior 3 didn’t quite hit its mark. CI Games have admitted they took on too much trying to make an open-world game, but the critical drubbing they took hasn’t deterred the Polish studio.  They return this year with Sniper Ghost Warrior Contracts, a somewhat scaled back, yet hopefully more successful, entry in the series.

At E3 2019 I got the opportunity to watch a CI Games developer play through one of Sniper Ghost Warrior Contracts’ new sandboxes, and later got to try my own hand at the game, and I walked away fairly optimistic about what I saw. The mission on offer at E3 tasked players with taking out a key Russian scientist hiding out in a heavily-guarded military base nestled in the snow-covered Siberian mountains. Overall, the mission provided plenty of opportunity for stealth, straight-ahead action, and, of course, sniping.

So, about Contracts’ structure – the new approach is best compared to IO Interactive’s recent Hitman titles. Like those games, the game is divided into a series of self-contained sandboxes, each of which is actually fairly large, containing a number of sidequests and opportunities to fool around. The CI games guys brought up the level map, showing several mission staging areas clearly marked, and I would estimate the sandbox would take a solid few minutes to beeline across. In other words, Contracts is not an open-world game, but, like Hitman, its sandboxes are substantial and filled with things to explore and do.

The new structure seems to have allowed CI Games to turn more of their focus towards polish. Previous Sniper Ghost Warrior titles weren’t exactly lookers, but Contracts’ visuals were surprisingly appealing. If someone had told me this was a new game from a big publisher like, say, Warner Bros. Interactive or Ubisoft, I’d wouldn’t have had any reason to think they were lying. The sandbox I saw took place at night during a snowstorm, and the lighting and weather effects were impressive. The game’s framerate also seemed to hold steady, even during moments of intense action. 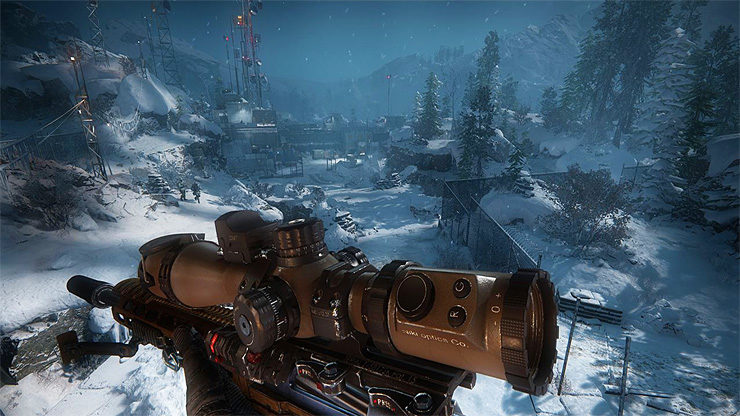 Before you can take a shot at your target, you first need to find them and a good vantage point. In the E3 demo this involved a lot of sneaking around, as the countryside surrounding the base was littered with guards. Stealth felt okay, although the level design could be a bit confusing and it was sometimes difficult to keep track of enemies in the storm. Some trial and error was definitely required.

Once I located my target, I was free to plan my attack. Every time you enter a sandbox you’ll be given a limited number of specialty bullets, which you’ll need to make careful use of if you’re to succeed. Some of these include bullets that will mark enemies within a certain radius, lure enemies to certain locations, or penetrate walls and armor. Planning your ideal shot is satisfying, and there are plenty of cool tricks you can pull off. Shoot the grenade hanging from a guy’s belt for an explosive kill, or line things up perfectly and kill multiple baddies with a single bullet. By default, the game’s sniping mechanics are pretty hardcore, with the player having to take wind and a variety of other factors into account, but those who want to focus more on strategy and exploration can automate most of that.

I’ll admit, I don’t think I’ve achieved “Ghost Warrior” status just yet, as I alerted the entire Russian base when I finally took my shot at the scientist. Much like Hitman, once you kill your target, you have to successfully make it to an extraction point to finish the mission. In an interesting twist, there are no checkpoints once you snuff out your target, forcing you to get to an exit in one go. Die and it’s back to the moment you killed your target. I’ll admit, I never made it out of the level alive in the time I had. If you’re looking for a difficult, strategic shooter, Contracts should provide, as I suffered my share of deaths during my short time with the game.

After checking out Sniper Ghost Warrior Contracts, I got a chance to sit down with the game’s art director Rick Nath to discuss a variety of subjects, including the game’s new sandbox structure, rival system, graphics engine, and more…

Sniper Ghost Warrior Contracts trades in an open world for a series of self-contained sandboxes. How many are there? The E3 demo focused on a snowy level, but can we look forward to other types of scenery?

We can’t confirm the exact amount of maps right now, but we can say that scenery wise we have a lot of variation. One of the main reasons for us to pick Siberia as a location was due to its visual diversity. So, there’s snow covered landscapes to lush green forests, lakes, glaciers, and industrial areas.

How much is there to do in each sandbox? How much content does Contracts offer as a whole?

The game will have around 25 contracts and in fact each contract you can think of as individual missions. On top of that we will have additional bounty contracts that you won’t need to execute in order to progress further within the campaign. I can imagine that some of those contracts can take even more than an hour depending on the player skill, but some others will be able to be done within much shorter period of time. We really think it is all about replayability, you can play each contract in the multiple ways. I am confident the game has plenty of content for players to really have fun and enjoy it a lot.

The demo we saw took place at night. Is there a day/night system at work?

We specifically chose different times of days to work with the gameplay and the level art. Each sandbox has its own set time of day.

During the demo you mentioned a new Rival system. How exactly will that work?

In the game the player will meet other contract killers and he or she may have to compete with or simply assassinate them. We call them Rivals and they will be AI driven.

You’ve also said the game will feature a multiplayer component. Can you shed any light on that?

I’d love to, but unfortunately can’t say much on this for now. 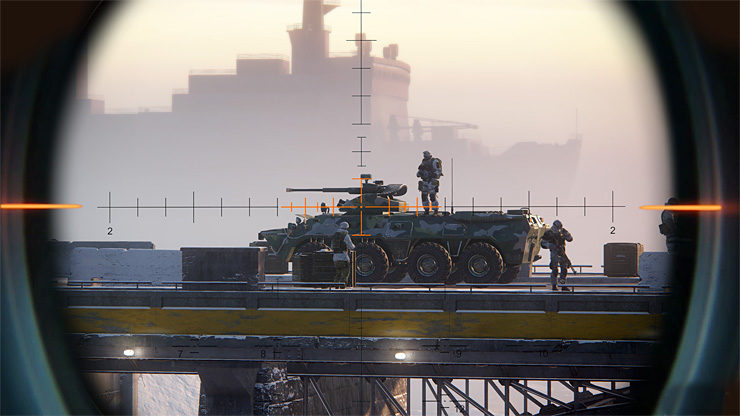 The Contracts concept seems very well suited to DLC. Are their plans to make this a “live service” of sorts with regular map and mission updates?

There’s a lot of potential, you’re absolutely right about that. More details on this will be revealed closer to the time of launch.

Any plans for locations other than Siberia?

Siberia has a lot of to offer, there is a lot of variety. We wanted to give more depth to Siberia instead of jumping from one territory to another. I think to a degree you can call our game a journey over that land.

Sniper Ghost Warrior 3 attempted a fairly in-depth, cinematic plot, with mixed success. Will Contracts have an overarching plot too, or will it be more episodic?

Yes that’s what it is, there’s an overarching plot, but we don't want to go too far with the narrative. Since early on we made a clear decision for the story to provide interesting context for the gameplay rather than vice versa.

This game is definitely a visual step up from past entries in the series. What engine is it using? Are there plans to use any advanced rendering techniques like, say, ray tracing?

Thanks, we’ve really tried to push every visual area. The engine had a big overhaul, but we’re still using Cryengine for this. The main thing we wanted to focus on was to improve our visuals, increase detail and bring down load times. This is something that was a priority for us. The new rendering techniques are really cool, but it came down to making sure we had a solid foundation to build on.

What kind of resolution and performance are you looking to push on consoles? Particularly the Xbox One X and PS4 Pro? Any special features planned for PC?

As you may already see, the game looks really beautiful especially considering it is not a triple A production. It will support both the latest consoles and [newer] PC hardware. It is still too early for more details, but for sure we want to take care of PC community better than before. It is really important to us. Even though we are a relatively small team, I think we will really make this happen so fans both on PC and consoles will get the game they will really enjoy. 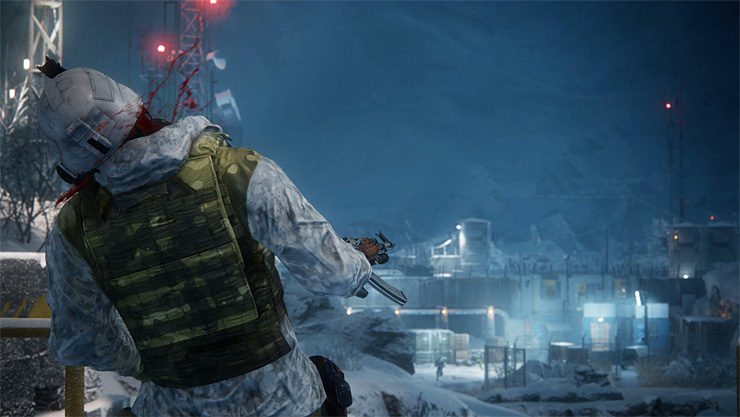 One of the big appeals of Contracts seems to be the emergent cool sniper moments you can pull off. Any particularly badass kills you’ve seen folks on the team pull off?

The great thing about games like this are that there’s never just one way to complete your contract. You can play it with the perfect sniping-and-stealth assassin style or you can brute force your way through but that will be really hard approach. Since the game is built as a sandbox we don’t want to limit the options but we want to say that there will be a clearly easier and more difficult routes to execute each contract. For the creative kills let’s wait for the community to bring their ideas when the game is launched.

You’ve announced for PC, Xbox One, and PS4. Will the PC version be coming multiple storefronts, including Steam? Any plans to support Google Stadia?

The PC version is up on Steam, you can add it as a Wishlist. We are planning to be out there with other leading platforms, that is all I can say right now.