Lauded as one of the few RPG”s to take inspiration from Valkyrie Profile’s intuitive battle system (Exist Archive being the only other that comes to mind), Indivisible was an RPG project that I’ve waited for years to finally play. As a notable Kickstarter success story, developer Lab Zero Games has been chipping away at Indivisible over the years, releasing new demos and teases that kept my attention. Music from the Secret of Mana composer, an opening from Studio Trigger, and a combat system designed by a guy that understands fighting games at a fundamental level (and even succeeded at creating a balanced fighter with only two buttons), all of these parts made up a game that I’ve quietly been excited for the entire life of the PlayStation 4. Now that Ajna’s quest is finally here and I’ve seen it through to the end, I can finally explore whether Indivisible was worth the wait. 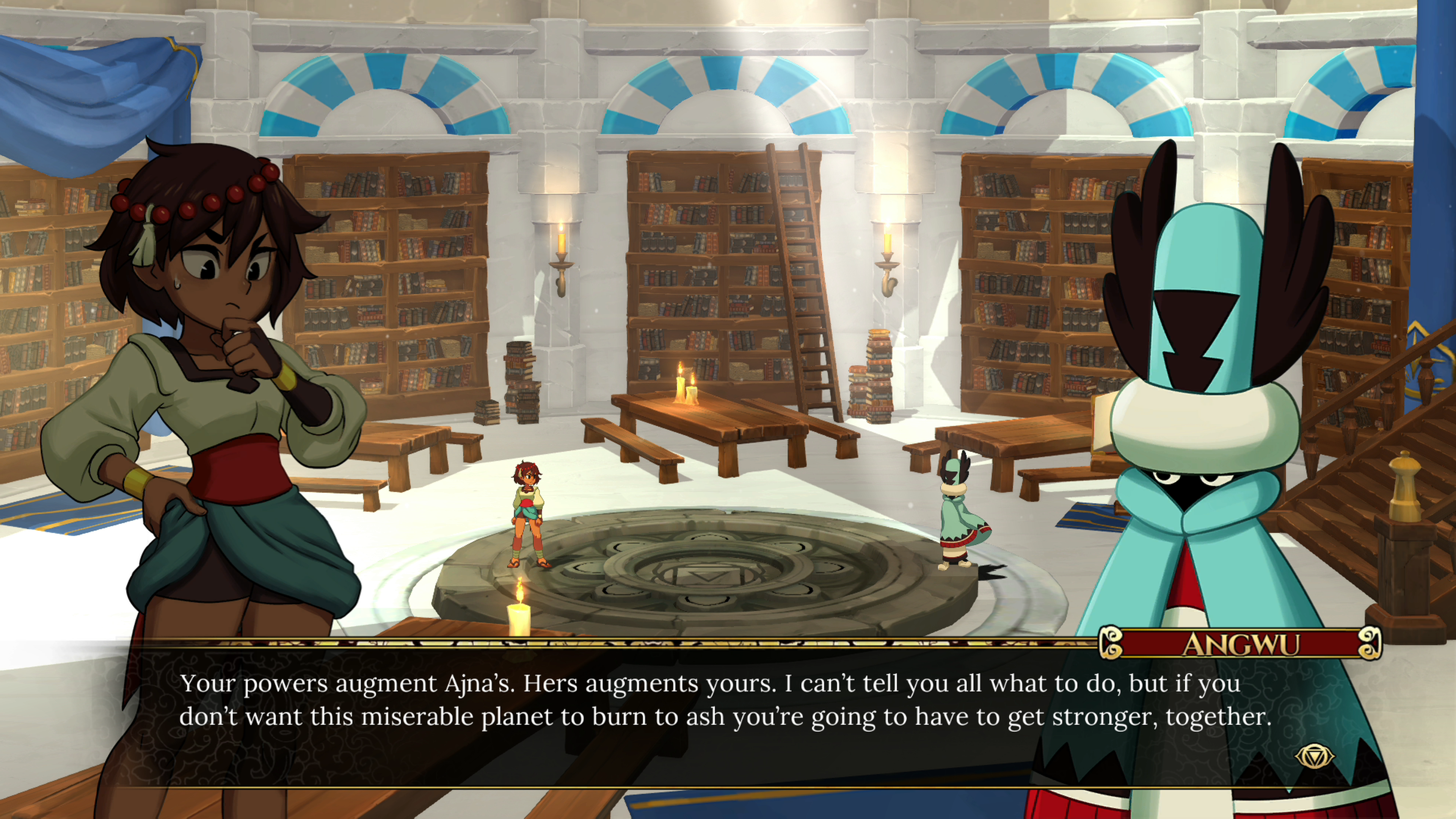 Indivisible opens with the young Ajna training under the tutelage of her father, Indr, not long before her village is razed to the ground and her father is killed at the hands of a man named Ravannavar for reasons unknown, forcing Ajna to leave her village and venture out into the world to seek the head of her father’s killer. It’s a simple tale of revenge with one simple wrinkle: the triggerman behind her father’s death has been absorbed into Ajna’s mind, along with most other notable characters she meets.

Ajna’s quest for revenge will see her befriend a wide variety of curious characters to fight alongside her. When not being used in combat, each character lives rent-free within Ajna’s mind palace (okay, more like a mess of floating mind islands), one of those powers that inexplicably comes from her divine lineage. The fights (of which there are more than plenty) bring Ajna and three of her incarnate friends to battle on the four PlayStation face buttons. 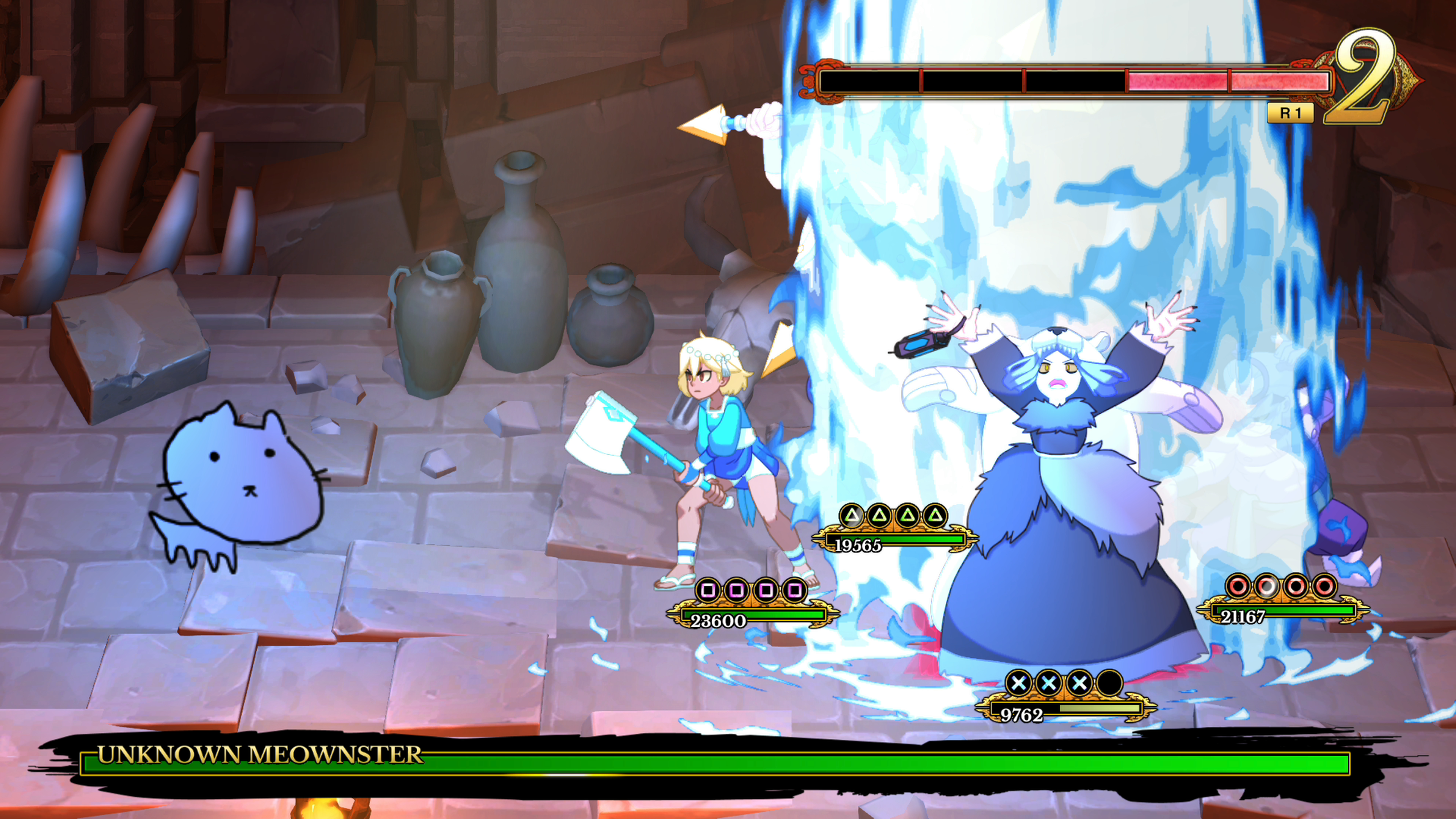 The turn-based combat to Indivisible builds heavily upon Valkyrie Profile’s direct character control in its battle system. With each press of a character button, they’ll do a single attack, which can be modified by holding up or down to infuse your combos with launchers and OTG’s. Some enemies wield shields that can only be broken by attacking from two directions at once, while others may absorb elemental or ranged attacks 100% of the time. With the diverse roster and being able to freely pick any other three heroes to join Ajna on the battlefield, players will eventually develop their own combos with such a simple toolset. As attacks (and perfect blocks) land, Ajna gains a resource known as Iddhi that can be used to power up special attacks with most special attacks able to be powered up to three levels of charge for greatly increased effect.

Healing and damage mitigation are two steps to Indivisible’s combat that can’t be overstated. Ajna doesn’t mess around with economics or potions, so her two fists and an axe are the only tools she can bring to combat. In order to survive, it takes some proper timing or an incarnation that can restore even a small pool of life. Blocking is the simplest tool of damage mitigation, but timing a block perfectly can result in a ‘Clean Block’ and restore a small amount of health. The other option is by way of specific character abilities (Ginseng and Honey’s the first character that can be treated as a dedicated healer, although Razmi’s level 1 Iddhi attack can also recover health) to bring Ajna’s team back to life. During Indivisible’s first act, Ajna has an immensely helpful team-wide healing ability but it disappears suddenly as the story goes on. 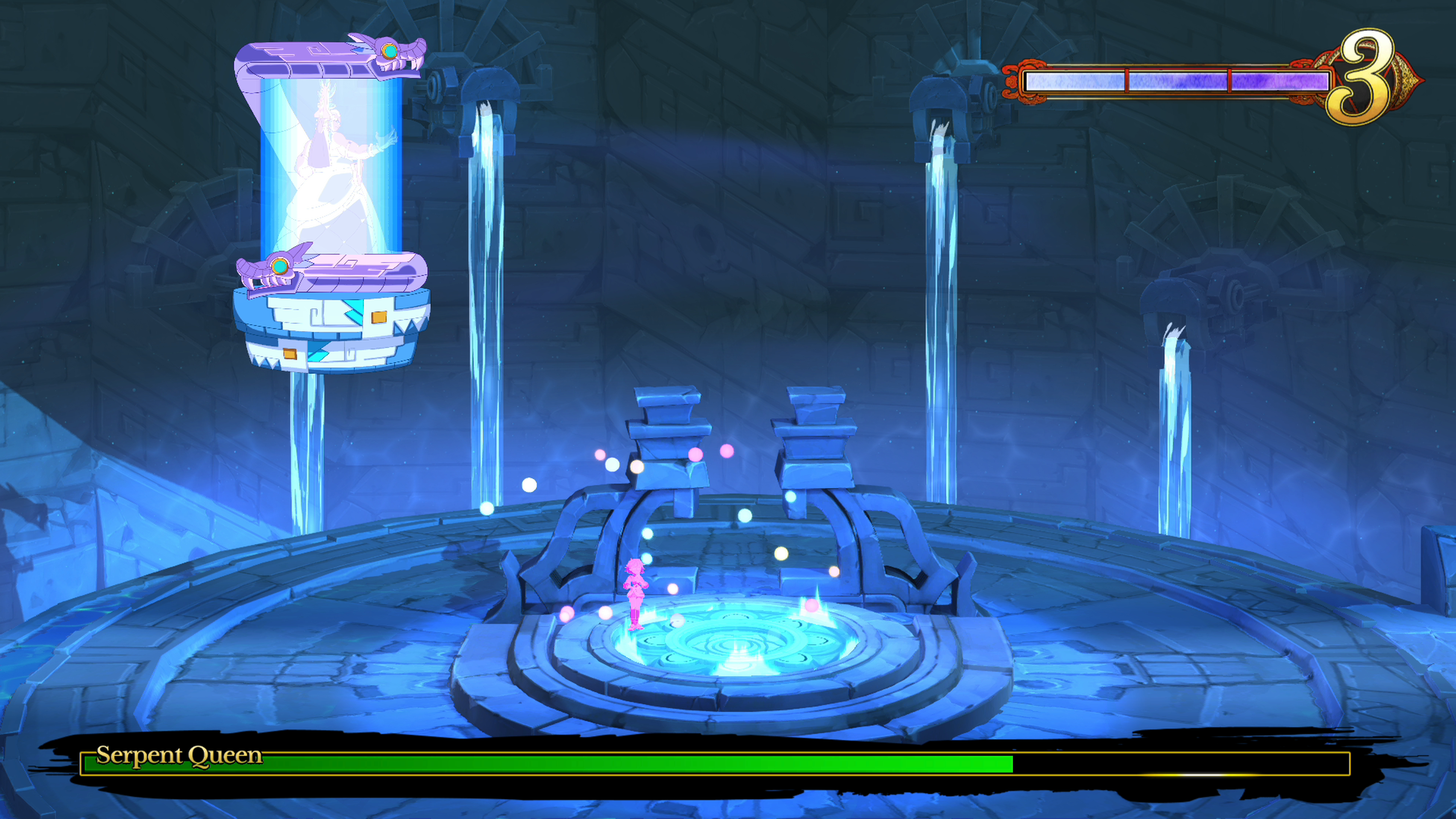 Despite bearing the tag of an action RPG, Indivisible leans much more into the former than the latter. With the exception of Ajna, the other incarnations in your party don’t gain new abilities or traversal mechanics. There are a limited number of enemy encounters throughout the world and each rewards the party with experience that increases their love and affection for Ajna as well as Ajna’s own personal level. This simply translates to more health, as I noticed additional strength coming through story-based upgrades rather than individual character levels. However, I did seem to see characters generate more Iddhi in their attacks at higher levels, so there must be some hidden upgrades not shown to the player.

Ajna’s own arsenal grows with each new ability to kit the young powerhouse into a worthy adventurer. Each new ability that Ajna unlocks is used in traversal in some manner. From her mother’s axe that works as a piton to propel up sheer surfaces to bows and spears that unlock switches from far away, Indivisible is filled with essential upgrades to the platforming sections. Each move intuitively augments her traversal skills and no one move feels like a replacement for another. Lab Zero has tweaked each tool to work together with other abilities, resulting in a reason to backtrack and revisit worlds to acquire collectible Ringsels that were just out of reach. If not for the transition to turn-based battles, Indivisible could be the exotic successor to Guacamelee from across the sea of milk.

Those same tools can be used to instigate combat, where the camera zooms in where you’re currently standing to create a makeshift battlefield. In most areas where both parties are on a flat plane, this works well. It’s when there’s any difference in elevation between Ajna and foe or fighting near the edge of a cliff that the combat transitions can be more of a frustration than an amusement. I can’t count how many times I started a fight too close to a spike-filled gap, only to either be knocked back into or even have Ajna jump backwards into the gap when returning to her position after an attack. Any time this happens, the action is quickly rewound and Ajna is back where she was standing just a few seconds prior. Again, it’s more of an annoyance than anything else but happens with such frequency in the underground layers of Kaanul that any player is bound to run into this at least once in their playthrough of Indivisible. 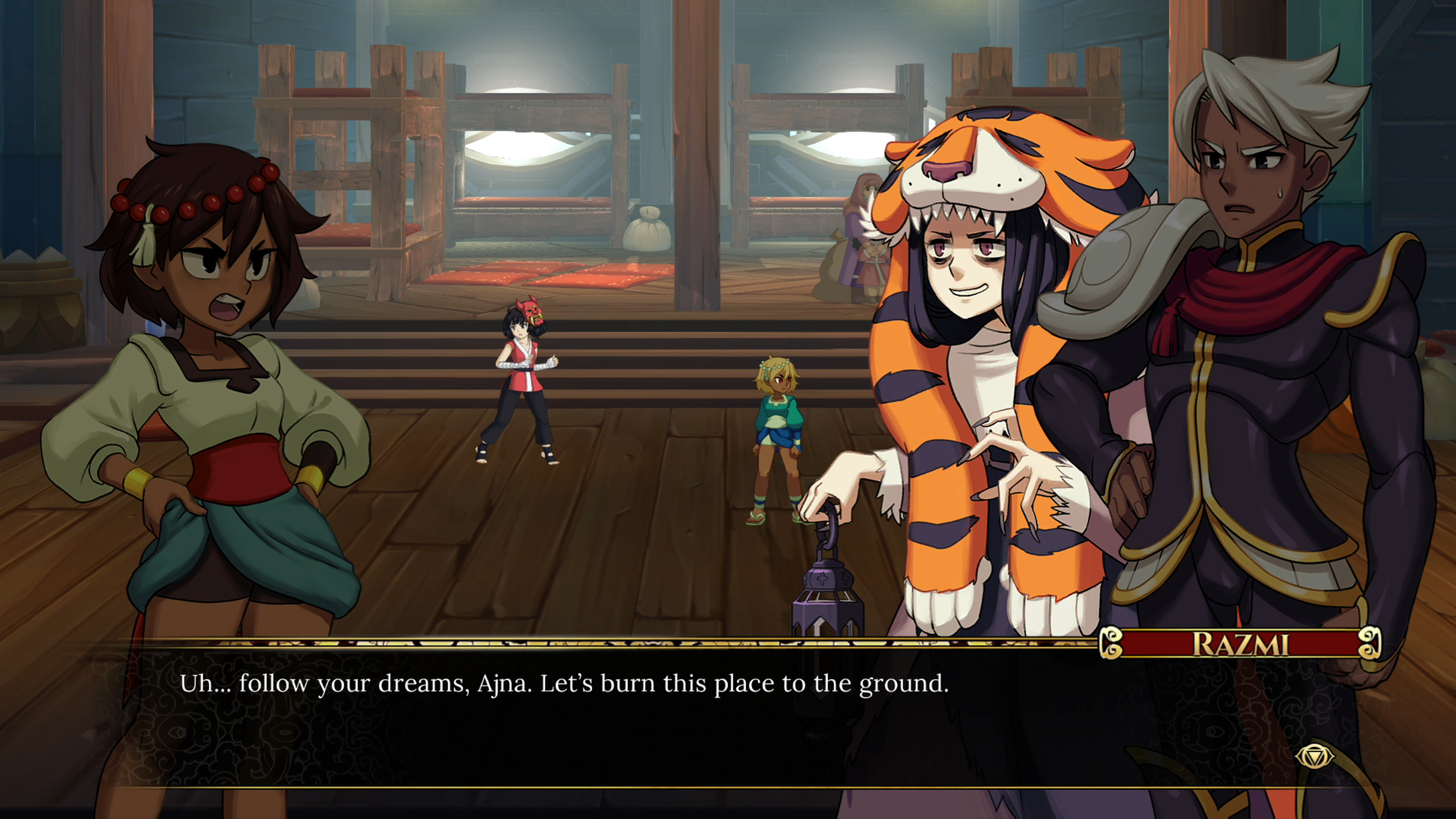 The art style to Indivisible is remarkable and easily what sets it apart from other RPG’s on the market, inked by the same team that put in ludicrous amounts of frames and animation into every Skullgirls character has done the same with Ajna and team in Indivisible. This is instantly noticeable with the post-battle freeze-frame that shows every attack in progress; you can see every frame animated with no skipped keyframes. Each character has such extensive art that I often swapped them around just to admire how much work was put into each character during combat.

Initially, I wasn’t much of a fan of Ajna’s personality in Indivisible. Lacking real character growth early on, she seemed the type to instantly do whatever she wanted without care of the consequences after the sudden passing of her father at the hands of Ravannavar. Sometimes her motivations for revenge and wanting instant gratification come at a cost. There’s usually some form of roadblock that keeps Ajna from taking immediate action, however. Sometimes there’s a checkpoint that needs to be cleared, other times, a city in need of a hero. Because of Ajna’s bullheadedness (something she didn’t seem to acquire from her father), her good intentions sometimes wind up making matters worse. In one instance, Ajna defeats who she thinks to be an evil force that’s aiming to take over a city, only to learn later on that she defeated the one barrier keeping a deluge of slime from overtaking the city. Ajna isn’t without redemption, however; midway through the story, she has a turning point and grows emotionally to understand the impact her actions have left behind. When she becomes less demon bull in a china shop and more of a helpful superhero, Ajna becomes a more likable heroine. 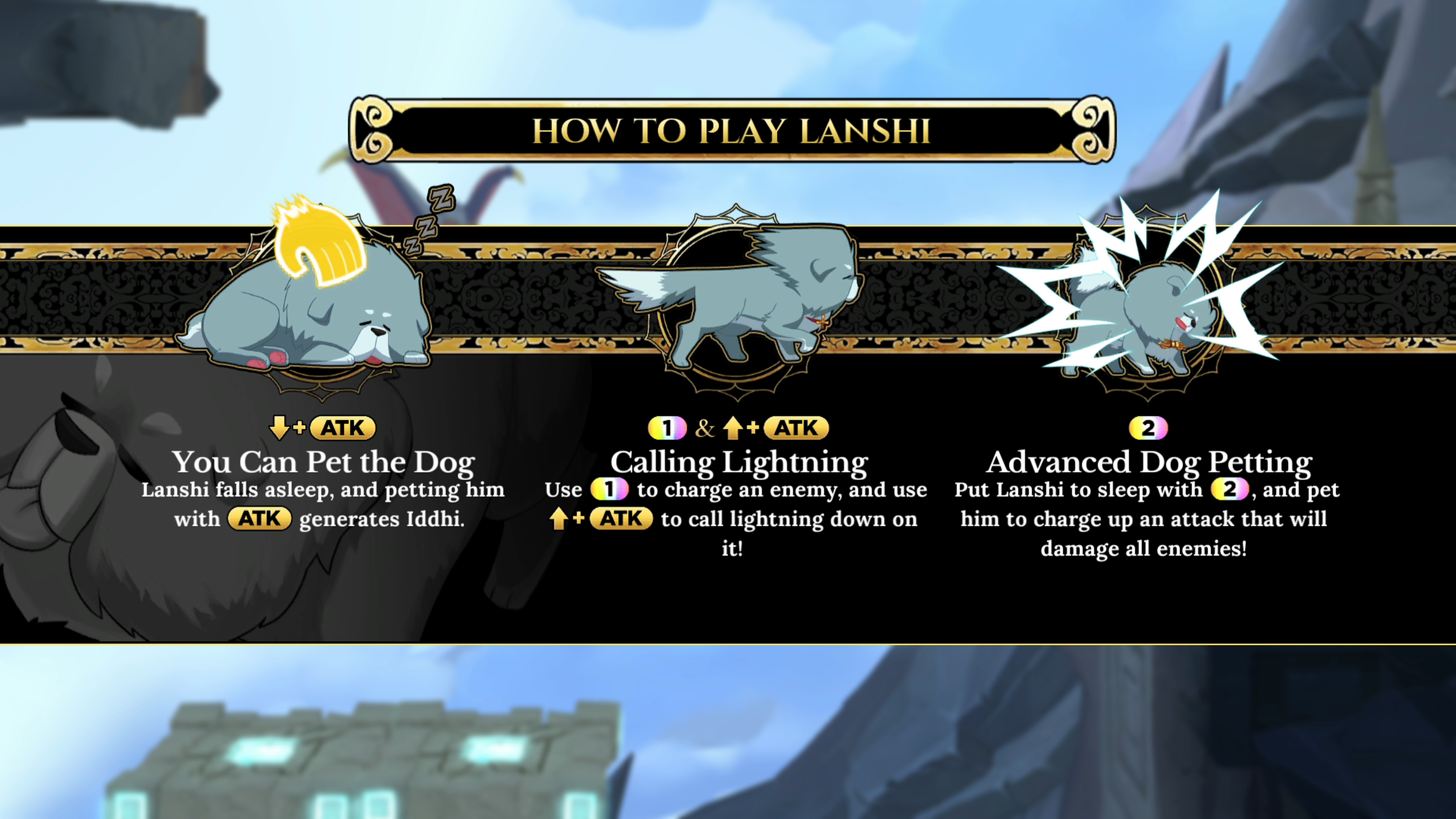 One thing that stays consistent throughout Indivisible is the writing and voice acting quality. Ajna and the dozens of incarnations that live rent-free within her mind all have amusing banter that remained a high point, even when the story trailed off from time to time. Among the number of playable characters was my personal favorite, Razmi, a witch whose personality stemmed from watching a little too much of whatever Ashwat’s version of Daria must have been.

While most role-playing games start off on the easier side and progressively get more difficult, Indivisible flips this trope around. Instead, the opening acts of Indivisible are more difficult with limited tools to mitigate and recover the damage taken. Unless I achieved an entire match of perfectly-timed Clean Blocks against certain enemies in the first few hours, my team could easily be wiped out. Add in a couple of hours of story progression and limited grinding (all enemy encounters exist in the open, with enemies almost never respawning after being defeated) and suddenly Indivisible gets much easier. I couldn’t tell if it was from barely being ahead of the curve or one of the story upgrades that destroyed all sense of difficulty, but that challenge almost never returns later on. Ajna’s health grows in such strange quantities and with each upgrade, Indivisible gets much easier: first a rough soft cap of 1,000 health, then an upgrade to 10,000, and then a final upgrade starting at around 25,000 health. At this final progression, all but the secret bosses barely posed a challenge and I was left wondering if I had mastered the combat as Lab Zero Games intended me to, or if it was simply rushing to wrap things up after the 30-hour mark. 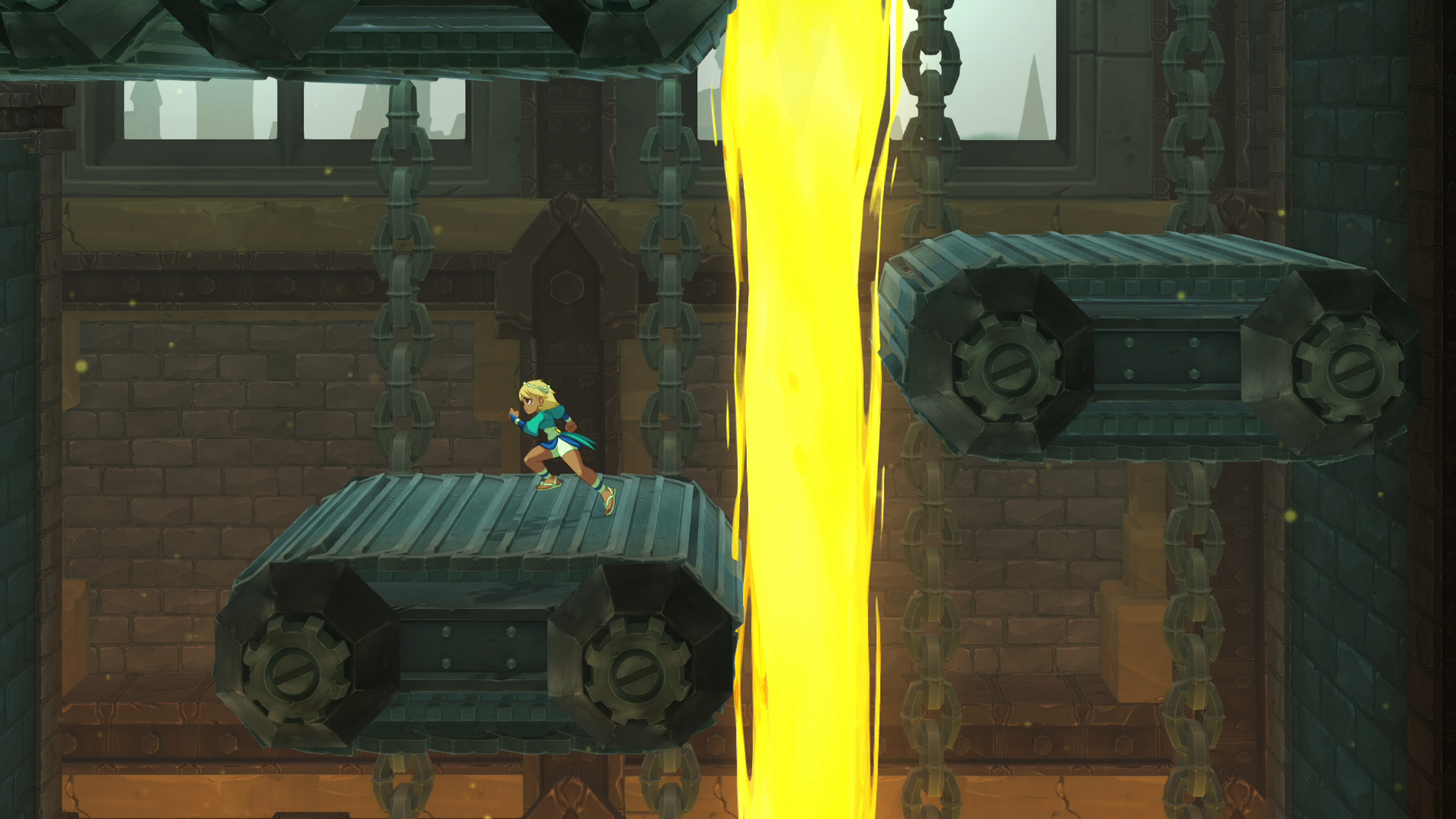 The entire journey from Ashwat to Mount Sumeru took me a little bit longer than the 20-25 hour average that many others have discussed, but for reasons that wasted more time than I would’ve liked. Numerous bugs to hinder my progress popped up, ranging from the mild-but-annoying being knocked out of combat by an enemy attack to getting trapped in walls or being unable to talk to a specific incarnation for guidance on where to go next. The most troubling glitch of all was being unable to reach the boss at the end of one of the levels, with their large arena an empty venue every time I approached. This was only remedied by rolling back a save and replaying a couple of hours of progress.

Indivisible should be admired for the sum of its parts, for the game wouldn’t be as enjoyable as it is without them, but they feel like only the smaller part of something greater. The RPG aspects are limited in nature and never enough to satisfy a numbers guy like myself, while the platforming mechanics are used to great effect in some areas with wider berths of inaction between uses due to the sheer amount of backtracking. Even the roster of playable incarnations was a great surprise, even though I gravitated towards the same six or seven throughout nearly the entire adventure.

Both a beautiful character design and meaningful focus on the action aspects, both in battle and traversing around in Indivisible are so good that the weaker aspects only stand out more.