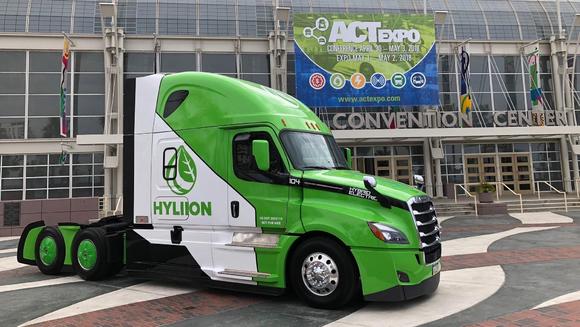 Hyliion (NYSE:HYLN), the company that manufactures electrified powertrains and hybrid suspension systems for Class 8 trucks, has seen its stock price fall substantially since the end of September when it sought to close its merger agreement with the SPAC, Tortoise Acquisition. As an illustration, since the 29th of September, Hyliion shares have registered a loss of over 60 percent relative to the current share price of $21.15 (as of 09:59 a.m. EDT). However, signs are emerging now that suggest the current downturn may be at an end.

As a refresher, the proposed merger between Hyliion and Tortoise Acquisition was announced back in June. However, the closure of this merger deal was marked by dramatic upheaval. As an illustration, during a special meeting of the Tortoise Acquisition shareholders, convened on the 28th of September to formally approve the business combination, all proposals except the third one – the Director Classification Charter Proposal – were approved. Accordingly, the meeting was reconvened on the 30th of September where the pertinent proposal was again rejected. Nonetheless, as the business combination proposal had already been approved by the shareholders of Hyliion and Tortoise Acquisition, the deal formally closed on the 1st of October, allowing the shares of the combined company to debut on the NYSE under a new ticker symbol – HYLN.

Thereafter, on the 23rd of October, Hyliion filed a Form S-1 with the U.S. SEC to register the following securities for issuance:

A detailed breakdown of the beneficial ownership of “selling securityholders” is provided on pages 107 through 109 of the prospectus.

It should be noted that this filing is still preliminary and that the securities registered through this prospectus can’t be sold on the stock exchange without a “Declaration of Effectiveness” by the SEC. This declaration is provided via an EFFECT Filing. Therefore, while these securities have not been issued/liquidated as yet, the specter of dilution has served as a potent headwind for Hyliion shares.

Even when the registration of these securities becomes effective, some – such as private warrants – may be barred from liquidation due to the attendant lock-up period. However, PIPE shares may be sold by “selling securityholders” as soon as the SEC declares the pertinent filing effective. It should be noted though that these investors are usually long-term holders rather than short-term speculators. Consequently, while some liquidation may occur, sustained selling pressure is unlikely to materialize in Hyliion shares.

Moving ahead, from a technical perspective, Hyliion stock appears to be very attractively situated. As an illustration, the stock is approaching a critical support level that extends from $17.97 to $19.90. Moreover, Hyliion’s STOCH (9,6) and Williams %R are both in oversold territory while the 5-period Moving Average is a Buy currently: 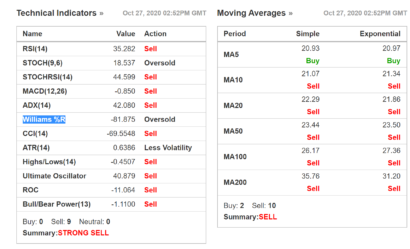 When the technical metrics are this skewed to the downside, a substantial bounce is usually the path of least resistance.