The cat's out of the bag and Apple has revealed to the world its latest and greatest set of smartphones in the form of the iPhone 6s and iPhone 6s Plus. And like any other 's' release of their smartphone, the new devices look exactly the same as the phones from last year, but under the hood is where things are brand new. But Jimmy Kimmel went a little above and beyond the norm and sent his team out on the street and showed people the original iPhone from 2007, and told them it's the new iPhone 6s test unit. And guess what? They fell for it! 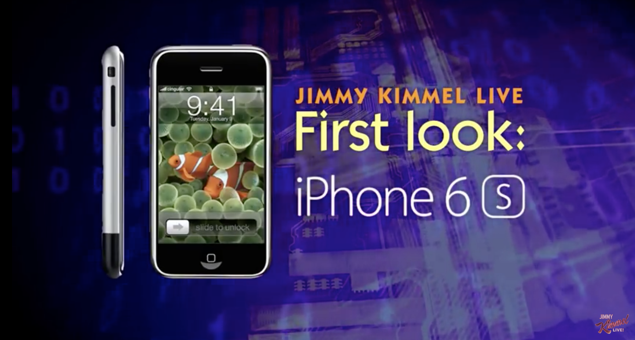 The video is over 3 minutes long, and instead of spoiling it for you straight up, we want you to dive right into the action.

It's actually quite hilarious how people fell for the whole prank. Some even went on record saying that the iPhone 6s (actually the original iPhone) feels much nicer in the hand than before, and that it even had a better camera and a higher resolution screen.

Jimmy Kimmel is known to pull off such pranks and has done so on a number of occasions, but we have to say: this one really takes the cake!

It's actually a quite interesting video when you consider the fact that some people actually liked the smaller display more on an iPhone than what is being offered with the iPhone 6. But it's worth noting that the iPhone 6 and iPhone 6 Plus were direct products of increased market demand for larger screen devices, and with Samsung upping its game when it comes to larger smartphones, Cupertino had to reply back hard and swift, and they did so with last year's releases.

The iPhone 6s and iPhone 6s Plus are currently available for pre-order with some of the models having already sold out. In fact, the new iPhones are selling so quickly that Apple said that it is on pace to exceed 10 million pre-orders on launch weekend alone, which is more than the number which the iPhone 6 and iPhone 6 Plus accumulated last year.

The iPhone 6s and iPhone 6s Plus will start arriving at people's doors on the 25th of September, which is just over ten days away from now.

What are your thoughts and opinions on Jimmy Kimmel's video? Be sure to let us know in the comments section below. And also inform us whether or not you have pre-ordered an iPhone 6s for yourself.