It looks like things over at HTC seem to be moving quite fast in Android Lollipop territory. Just a short while back, we received confirmation from folks at the Taiwanese manufactuer that the HTC One M8 and the HTC One M7 would one of the first handsets to get the Android Lollipop update this year. While the update is limited to the Google Play edition of the devices, its progress nevertheless and Android Lollipop can be expected to come to non Google Play HTC devices no later than February if the company stays true to its word and delivers on it. 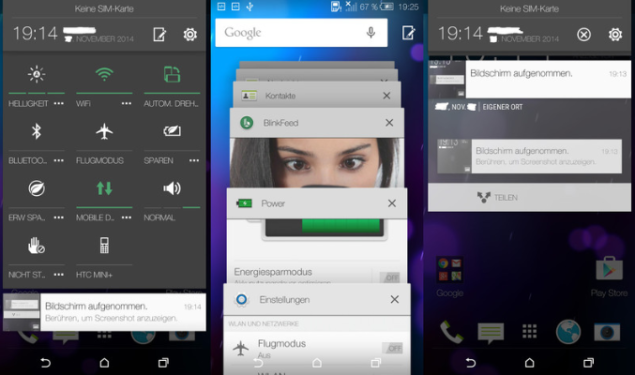 After several initial screenshots which claimed that HTC's Android Lollipop update would be coming with an all new HTC Sense 7 were debunked, we now have more screenshots for you today which appear to be the real deal and show several improvements and a great looking overall design. The screenshots can be seen in the image above and the HTC Sense 6 and Android Lollipop are running on an HTC One M8 in them.

The first thing that you'll notice in the screens is the much improved multitasking view. This view in the HTC Sense 6 seems to have borrowed heavily from Android Lollipop and its Material Design. The notification tray and the drop down menu also have received several changes which end up giving the interface an overall smoother and minimalistic look.