As Samsung gets done with the launch of the Galaxy Note 7, only a handful of devices are left for 2016. Two of these are the HTC M1 and S1. Referred internally as Sailfish and Marlin, the pair are expected to make several upgrades this year. The HTC S1 has been the focus of majority of leaks so far. Today, we've managed to get our hands on an alleged benchmark listing of the device.

Talking about flagship Androids for 2016, a couple of specifications are common on all devices. Following historical trends, the Snapdragon has been making a consistent appearance on all devices. The HTC M1 and S1 won't be making any exceptions here either. While there's little information on Marlin so far, Sailfish has been gracious enough to provide us with some details.

Today's GFXBench listing provides a lot of details for the HTC Sailfish. The device will come with the Snapdragon 820, as you can see in the image below. This will be complemented with 4GB of RAM. Two storage variants of 22 and 24GB have been listed on GFXBench. These should change as today's listing is a testing variant. 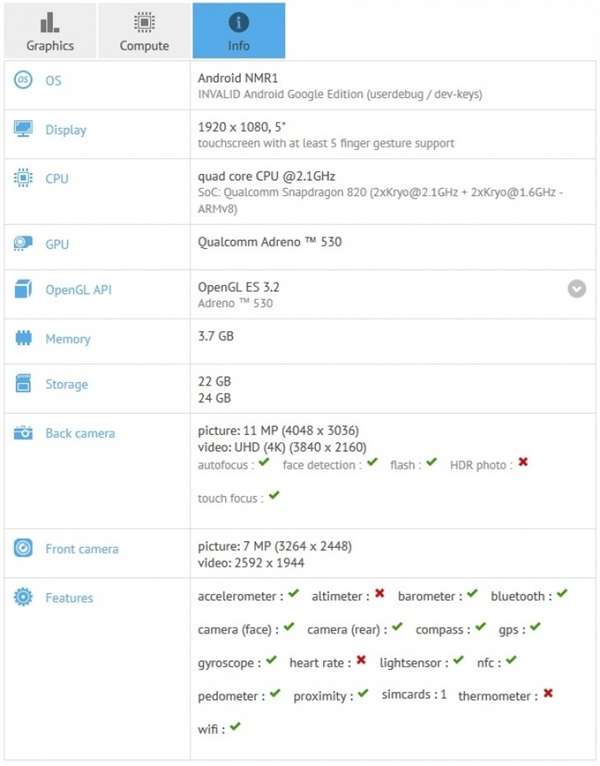 Display size for the Sailfish will be 5 inches with a resolution of 1920x1080. You'll also be getting 4K recording with the S1's rear camera this time. GeekBench lists it with a resolution of 12MP which matches the majority of Android flagships out there. We're more eager to hear about Marlin's camera specifications as it's here both Google and HTC should demonstrate their strengths. Other details for the HTC S1 include sensors such as gyroscope, lightsensor, NFC, proximity and more being listed on the device.

A battery of 2700mAh should also be expected for the device, though this might change in the future. Design wise, both the devices have managed to catch our eye as well. HTC's expected to do away with a camera bump which in itself should be a major aesthetic win for the device. M1's expected to feature an all metal design and the S1's expected to be a blend of both plastic and a metal frame. Android Nougat's expected in August so there's still some time before both the Nexus devices see light of day. We'll be on the lookout for more. Till then, stay tuned and let us know what you think in the comments section below.