These HQ Gears of War 4 Screenshots & Art Are Mindblowing

Microsoft has released a set of new Gears of War 4 visuals in high quality. 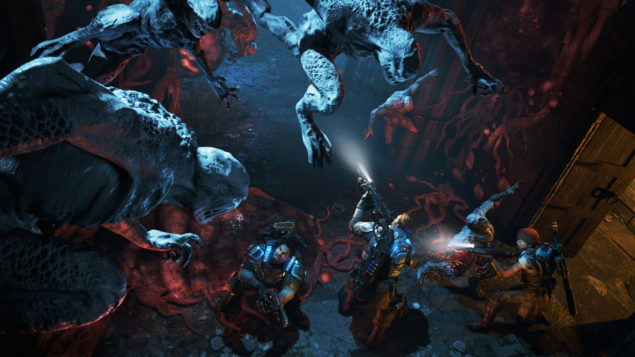 The visuals include screenshots and artwork from the Gears of War 4 campaign mode, and it seems that The Coalition has done  a great job on grasping the ‘Gears’ atmosphere.

Check out the gallery down below:

Gears of War 4 is slated for a release this October, and could well become the ‘largest’ Xbox One to date with a rumoured file size between 70 and 80GB. The shooter is developed Microsoft’s in-house studio, The Coalition, and according to studio head Rod Fergusson, the team wants Gears 4 to be a “graphical showcase” for the Xbox One.

Gears of War 4 releasing this October

Microsoft and The Coalition announced the release date for their shooter some weeks ago, alongside the game’s official cover art.

“It’s been almost a year since Gears of War 4 made its global debut at E3 2015, and today’s announcement is set to ignite a chain of upcoming revelations about what’s in store for JD Fenix and the next generation of Gears heroes”, Director of community at The Coalition, Adam Fletcher, wrote on the Xbox Wire website.

“Gears of War 4 marks the beginning of an epic new saga for one of gaming’s most celebrated franchises, as a new band of heroes rises to confront a fearsome new threat. Harkening back to the dark and intense roots of the original classic, fans can expect a familiar, yet distinct evolution of gameplay, including brutal and intimate action, a heart-pounding campaign, genre-defining multiplayer and stunning visuals powered by Unreal Engine 4”.

Gears of War 4 is scheduled for a release on October 11th for Xbox One. Whether a PC version will be released is currently unknown.