How Not to Land on a Planet in Elite Dangerous: Horizons

The newest expansion to Elite: Dangerous, called Horizons, is officially in beta right now and allows you to make the transition into the atmosphere and gravity well of celestial bodies, letting you land and explore should you like. 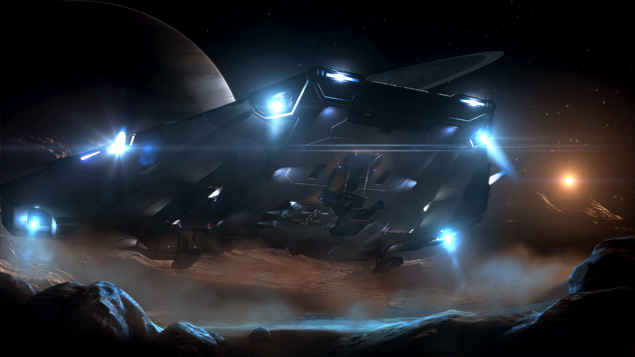 Landing in Horizons is as easy as one, two... oh crap, there goes my hull.

Elite Dangerous: Horizons adds more of what fans and others have been asking for. The initial beta is turning out to be a particularly fun time, and we're told that more planet types and environments are coming. For now though, Frontier Developments is perfecting atmospheric flight and the rendering of whole entire planets. Want to see how not to land? Watch below, and don't do what I do...

Oddly, it only scratched the paint when I went to fix my ship.

What would be incredible, is if they took all of the Kepler data to try to model each, or significant amount of, the real potentially habitable planets and let you explore them. That might be something for future development, as are the rendering of more lush and green environments themselves. But for now, we have entire planetoid bodies and new things to do on the surface. Even just driving around with the SRV (the rover) is a fun time. I can only imagine the types of player created events as a result of this new update.

The visuals in Elite: Dangerous are already majestic in how they portray the nearly 100 billion different stars and star-systems. The backdrop of the procedural rendered 1:1 representation of the galaxy is stunning, the disparate gasses that are still floating about and cautiously coming together as they at least look like they're going to form new stars and other stellar phenomenon give a sense of being in space. Wide open, dark and lonely space. But it's breathtaking in its own right.

Regardless of whether you think Elite: Dangerous is a stunning looking game visually, it's a space simulation that has a lot of breadth. A massively wide scale, and enough cubic kilometers (parsecs really) to make any open-world game jealous. What it lacked when released was a sense of depth, or that feeling that you were really in a futuristic society full of technology and interesting people. There's a lot to do, but it never quite felt like it mattered, and sometimes it seemed limited.

Horizons adds something new, something that is only the beginning of a vision of what David Braben and the folks at Frontier Developments want to make Elite: Dangerous into. The original release was true to the core of the series, but it lacked what a more critical generation of space-simulator enthusiasts really wanted, a seamless space-faring experience that involves more than just mindlessly mining, trading goods or exploring. Those are fun things on their own, but they do get a bit grindy. The combat is a blast, though it can always be improved, of course.

But my impressions of Horizons and the planetary environments that it adds are positive. It's a good start in a direction that Elite: Dangerous has needed to be relevant in an age that isn't quite satisfied with the formula, albeit successful, that the original franchise developed. It isn't an easy process to implement a seamless planetary entry with flourishing and exuberant jungles and forests, or rolling grasslands with cities on the horizon. But that's on the, well, the horizon.

It's a positive sign that I think more space sim enthusiasts will enjoy as opposed to the smaller community that was so taken (me included) by the original intent and product that we got. I liked it, but as a business decision, it makes perfect sense to make it something far greater, and that's what they're doing here.