This Homefront: The Revolution Collector’s Edition Comes with a Drone 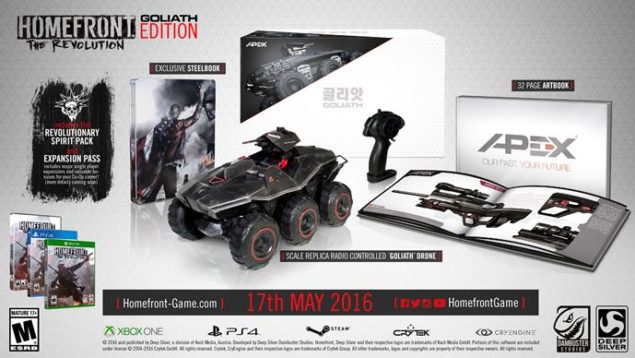 Usually I dislike anything that gets me away from the television. In fact, the list is pretty small: large fire, possible murder (victim or culprit) or delivery man. Still, if I happened to love Homefront and happened to buy the Goliath Edition of the new game, I reckon I'd be pretty excited to brave the outside world with this remote control scale replica.

But that's not all you'll get in the $159 bundle. As well as a boxed edition of the game, you'll get a 32 page art book, an exclusive steel book, the Revolutionary Spirit pack - which includes some skins and instant unlocks - and the season pass. That last one all major single play expansions, and you'll also get all the extra content for the co-op Resistance Mode, including new missions, challenges, features and items.

But it's the drone that'll take up most of that price. It includes working lights and six-wheel suspension, which is two for two better than my car.

Anybody who pre-orders a physical copy of the game will get the Revolutionary Spirit, while digital pre-orders will net you the Liberty Pack. Both contain slightly different unlocks in game.

If you're rich and fancy pre-ordering multiple copies of the same game because reasons, then you can get all the offered bonus content!

Homefront: The Revolution comes out May 17.