The trailer from Paris Games Week shows us precisely how Agent 47 would take a working vacation along the coast of Italy in the gorgeous setting of Sapienza.

Agent 47 relaxes on the Coast of Italy in the newest Hitman trailer.

A new location for Hitman was revealed this week at Paris Games Week in a brand new trailer. The in-engine action takes place in a fictional town known as Sapienza, which rests along the southern coast of Italy. We see Agent 47 do what he does best, enjoy the sun, relax at the beach and generally cause silent mayhem, all to the sound of Between Two Points by The Glitch Mob.

In Sapienza we're shown quite the luxurious getaway, with a mansion and a medieval church that's poised serenely on the beach, with a small shopping center providing some alluring alleyways. It's a dense location, that appears to offer quite a few novel ways to take out your intended target.

Hitman is still set to release on March 11th 2016 on the PS4, Xbox One and PC. IO Interactive and Square Enix have said that the newest Hitman is supposed to be a true homage to the original idea that was created with the original in 2000. They've also been keen to explain that there will be no microtransactions though there will be different tiers of the game available for purchase. though they'll release content in a larger episodic way. It's also going to be the largest Hitman ever created with far more individual NPC's and far more massive areas to explore. 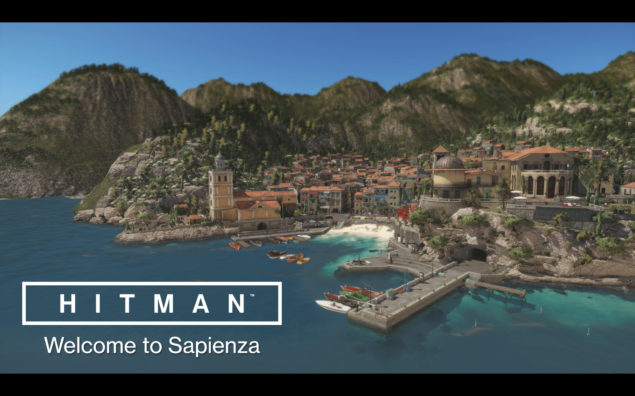