Here’s Everything That’s New in Samsung’s Latest Android 10 Based One UI 2.0 Beta

The Android 10-based OneUI 2.0 beta is finally here for some Galaxy 10 users. It is only available in some regions at the moment and should be available to a wider audience in the coming weeks. Here's a list of everything that is Samsung has to offer in Android 10. 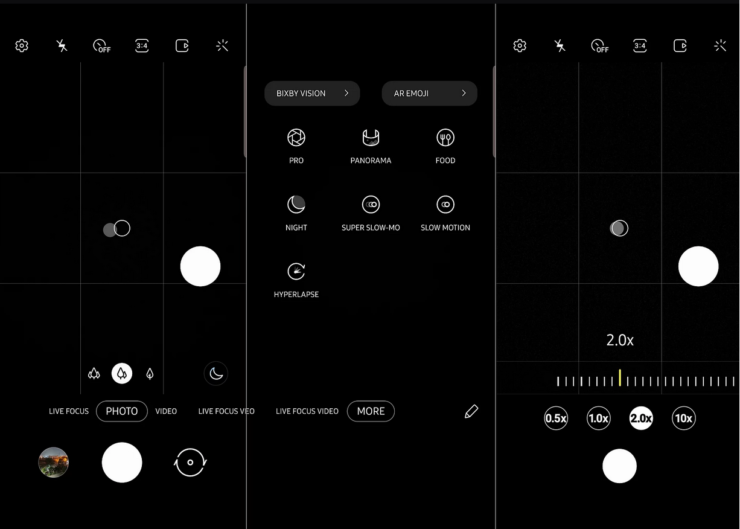 The Stock camera app gets yet another redesign with Android 10 in OneUI 2.0. There wasn't anything wrong with the way it looked previously, so we don't see a reason why Samsung decided that a redesign was in order. One of the most significant downgrades is that you no longer see all the camera modes available above the shutter button. By default, just the Photo, Video, Live Focus, and Live Focus are visible in the UI, and all other modes such as Slow Motion and Super Slow Motion are bundled together. Getting all the modes back involves dragging each button to the options wheel. 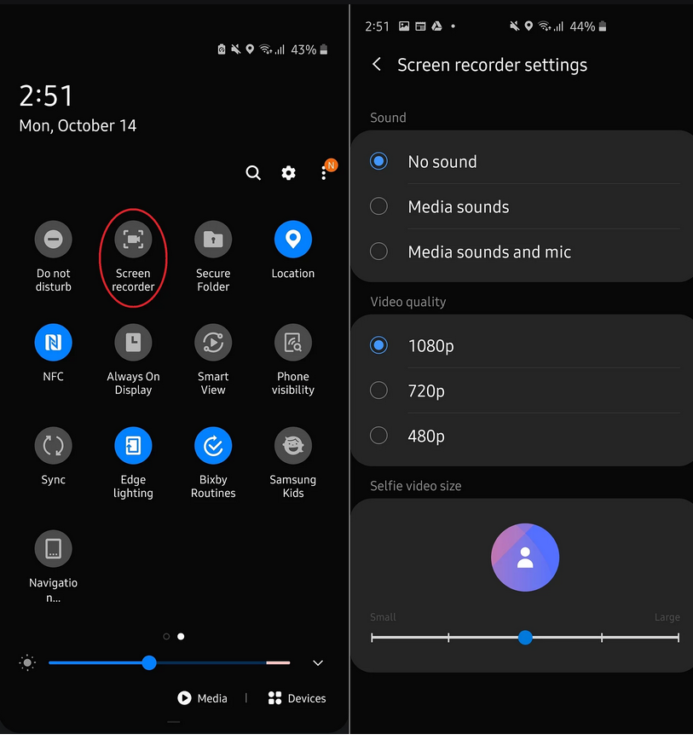 The Galaxy Note 10 series are the only devices that run Samsung's new Screen Recorder. Older devices still have to use the Game Center app to record the contents of one's screen. With OneUI 2.0, earlier devices will finally get access to the newer (and easier to use) Screen Recording software that Samsung debuted with the Note 10. 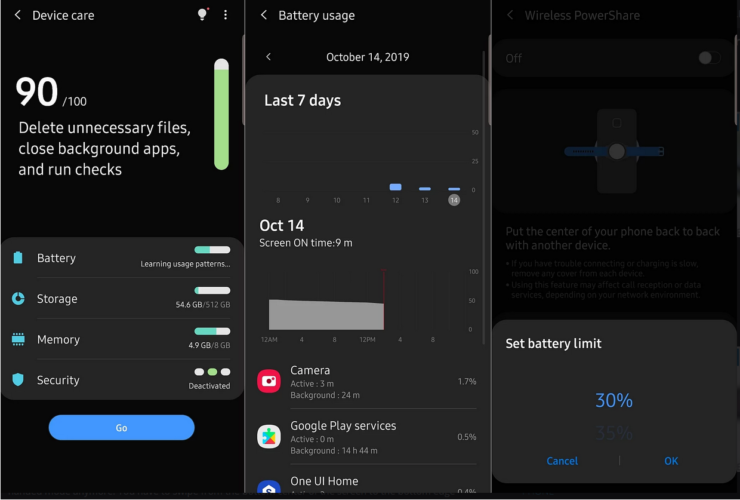 The Device Maintenance app also gets a fresh coat of paint with OneUI 2.0. The options are now listed vertically and have a little bar showing what's what. Additionally, you can now even determine when Wireless Powershare will switch itself off while charging a device. Until now, that value was set to 30% battery with no option to change it. 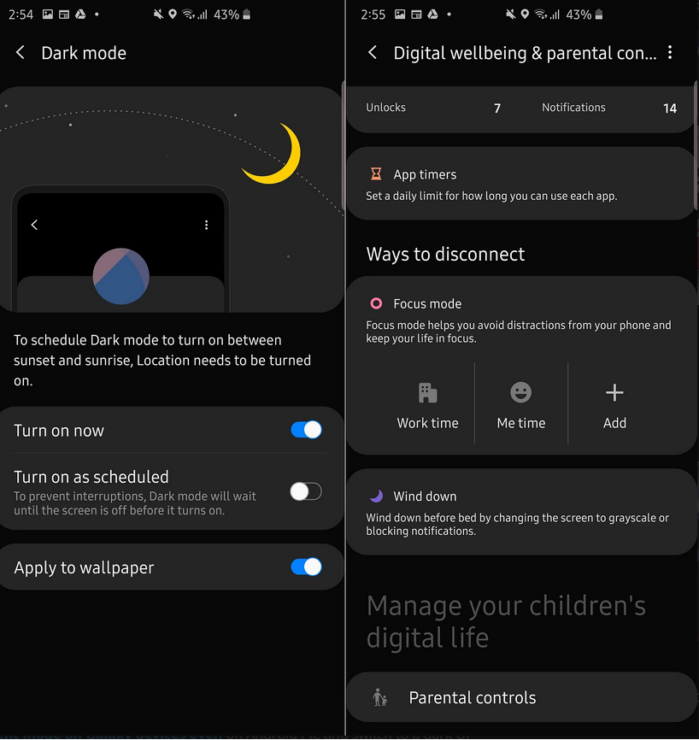 Samsung is a bit late to the Digital Wellbeing party, considering that it made its debut alongside Android Pie and since made its way to a lot of devices. Weirdly enough, Samsung straight out refused to incorporate any of the Digital Wellbeing features despite having a year to do so. OneUI 2.0 finally bakes in the Digital Wellbeing elements into the UI, presumably due to Google making it mandatory for all devices running Android 10. There is now a focus mode that disables all notifications and apps so you can focus on work. There are also new parental controls that let you remotely track phone usage and set limits to screen time. 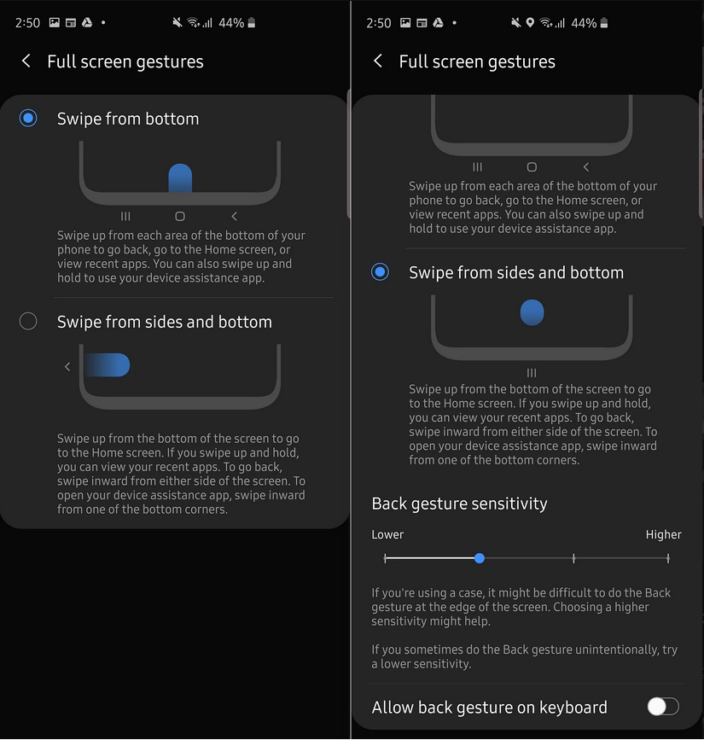 Google's never-ending obsession with navigation gestures has resulted in a lot of confusion over the years. Android Pie came with its own set of gestures, and now Android 10 has completely different ones. To make matters worse, Samsung has its own take on gestures. Thankfully, OneUI 2.0 lets you pick your poison by including all three. And yes, the standard navigation buttons are there in case all this new-age swiping thing is too much for you.

Like every major software upgrade, OneUI 2.0 brings with a bevy of minor QoL changes. The time and date at the top of the notification shade are a tad smaller, presumably to free up space for more tiles. The volume control buttons are a bit thicker, and there several new Edge lighting effects. The Contacts and My Files app has a trash section where deleted content stays for up to fifteen days. Additionally, the My Files can now copy files to multiple destinations at the same time. And the Calculator app can now perform some basic conversion between units.

All things considered, OneUI 2.0 isn't the most feature-rich update. A lot of 'new' Android 10 features were already baked into earlier builds of the now-dead Samsung Experience and OneUI. Do note that the above build is still in beta. Some features may not make it to the final, stable release and others could be added as time passes.