Get Haunt (XBLA) for Free Until Monday

Microsoft is currently promoting their Kinect title, "Haunt", by giving it out for free on Xbox Live Arcade. The promotion will last from 26th June, 2012 (today) till Monday, 2nd July 2012. 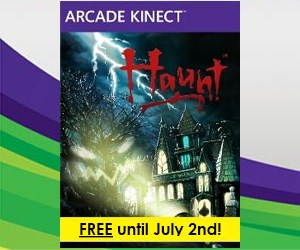 Haunt is a horror-adventure game developed by NanaOn-Sha, the creators of famous rhythm based video game PaRappa the Rapper, and was published by Microsoft Studios. This was the first Xbox Live Arcade game by NanaOn-Sha. It was received with a positive reaction by the critics and received between average to above average ratings.

In Haunt, the players are required to explore a haunted mansion using the Xbox 360's motion sensing peripheral, Kinect. One hand will be administering the control of the flash light and other hand would be used to various things, like; opening doors, pulling levers, opening tombs and etc. There is emphasis on the player's whole body, for example, the player is required to cover his ears when a banshee screams and so on. The game is pretty simple and fun, extracting the most a horror based adventure game can from a motion sensing camera. Get it and experience it for free before the time runs out.

What do you require to get the free game? You need an internet connection, to connect to Xbox Live. Make sure your Kinect is plugged into your console. Navigate to Kinect Central in the Xbox Dashboard and find the download tab.

You can view the trailer for "Haunt" here.