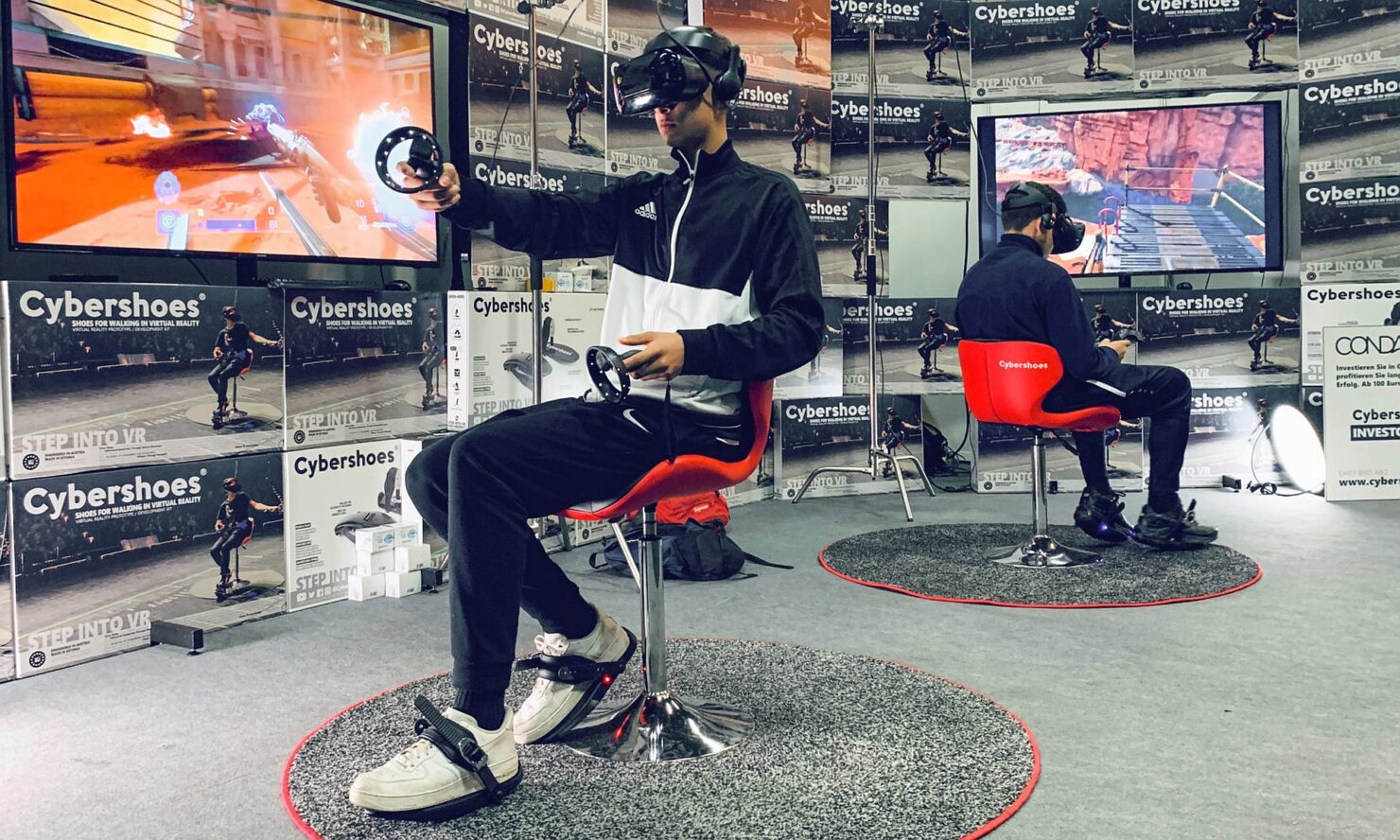 As virtual reality experiences and headsets evolve, it's not enough to remain sitting down while your hands and head do all the work. To make VR experiences more immersive, various companies are trying to put their best foot forward with mobility solutions that all aim to achieve movement in different ways. From the 3dRudder to the KAT Walk Mini, the way you get your feet into the game is still an unexplored territory. Now, a recent Kickstarter project called Cybershoes is getting players to step into the world of Skyrim (for example) with a tool that allows for a simple task that's still complex to pull off in virtual reality: walking.

The concept of Cybershoes is quite simple and brilliant. After putting on a comfortable pair of shoes, the Cybershoes slip on underneath and have a ratcheting strap that goes over the eyelets/tongue to securely fasten to your foot (not once did I have the shoes slip off during gameplay, but I did watch someone that managed to slip their foot sideways off of the tracker). A small lip on the heel keeps your foot from sliding backward out of the device, handy when trying to walk backward.

To track the movement of the player, there's a small roll on the underside of each unit of Cybershoes. This bidirectional roller can track both forward and backward movement that requires a bit of a kick and drag motion activate (admittedly, I never learned to roller blade, so this took a little getting used to).

For my demo of Doom VFR, I was able to pick up the concept of moving forward pretty quickly. Instead of a full gait, I had to scuttle and drag my feet across the ground in smaller steps. By sitting on a swivel chair, turning and reorienting myself was as simple as spinning around on the chair. While it's not a perfect way to walk, it's by far better than the alternative of teleporting from one point to the next or direct movement via the controller thumbsticks. Moving backward, on the other hand, should've been a simple reversal of motion but for some reason, I couldn't make my character move at the same pace as when I tried to walk forward. I'm sure with a much longer time to learn how to operate the Cybershoes, I could get the movement down, but for being able to just jump in and instantly pick up how to walk forward and turn, that alone could be a gamechanger for VR (and comfort!).

Because not everyone is going to have the same carpet or flooring where ever they play their VR experiences, Cybershoes is including a full-sized circular carpet in the complete package. This large carpet extends around the player in 360 degrees and from where I was sitting, even stretching my legs out all the way out, I was barely able to reach the edge of the carpet... This addition to the Cybershoes package is a nice addition and having a unified flooring solution helps the experience remain the same from user to user. The demo station that I played on also showed off the swivel barstool that will also be available for customers. Some end users may already have a chair that's perfect for VR, but I could see this working out well for VR arcades or shared environments.

The fully Cybershoes unit that was on demo (shoes, carpet, chair, receiver, cables, and cable management tool) is currently available for order directly from Cybershoes' online store. With the coupon code CES2020, interested buyers can save 10% off the original purchase price of $369.