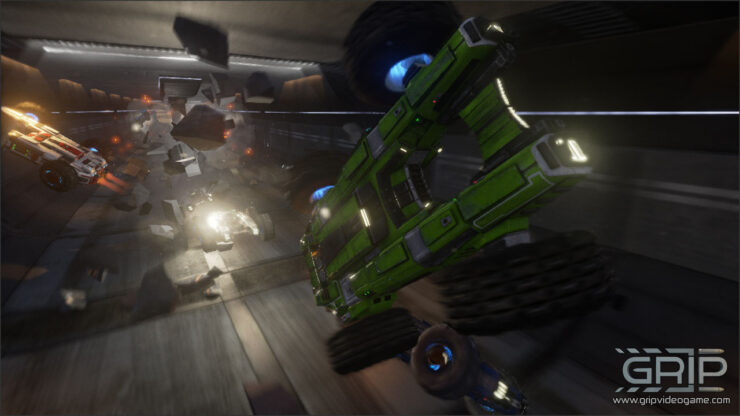 The Unreal Engine 4 powered combat racing game GRIP, developed by Caged Element, is going to release on PC and consoles later in 2018. You might remember that we covered the game with a developer interview during the Kickstarter campaign some time ago.

GRIP has been available for some time as a Steam Early Access title with highly positive user reception and the final release will come with some additional features as well as enhancements. The game will also be fully enhanced for PlayStation 4 Pro and Xbox One X.

Fully enhanced for PlayStation 4 Pro and Xbox One X, GRIP was inspired by the Rollcage games of the late 90’s and backed by a highly-skilled and accomplished team. Harnessing the power of Unreal Engine 4 to deliver gravity defying physics alongside a bristling arsenal of outlandish weapons, GRIP delivers the fastest, most competitive racing experience ever. Featuring a killer soundtrack, furious speeds and intense action, GRIP is guaranteed to generate unforgettable gaming moments - online or offline - with nail-biting split screen racing and tournaments.

Evolved from the age of street racing, the world of GRIP is brutal and cut-throat to the core. To win the race is never enough, greatness comes from the journey and the trail of merciless destruction you unleash upon your rivals along the way.

Scale walls, ceilings and anything else you can get your tires on to... as you master tantalizing tracks, tricks and perform mind-blowing stunts to race your way across the cosmos. Customise your vehicle, utilize devastating weapons and exploit a destructible environment to ensure not only victory, but the complete annihilation of your opponents.

The game will also be available to the public before release at PAX East, Booth #20031 (Boston, USA) and EGX Rezzed (London, UK) in the coming weeks.

GRIP launches this year on PC, PlayStation 4, Xbox One and Nintendo Switch in all regions. Check out the announcement trailer below.