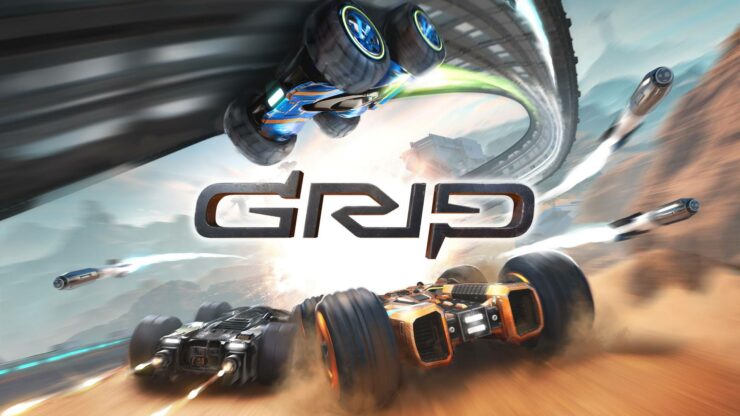 Over three years ago, we interviewed two-man team Caged Element about their GRIP combat racing game. Inspired by the classic Rollcage made by Psygnosis, GRIP was funded on Kickstarter and will launch tomorrow on PC, PlayStation 4, Xbox One and Nintendo Switch after over two years of Steam Early Access.

On the eve of the release, we chatted with Co-Founder and Game Director Chris Mallinson to find out what's next for Caged Element in terms of post-launch support and whether they are interested in supporting cross-platform online play and/or develop a VR compatible version of GRIP.

Can you talk about the tournament system and how that's going to work? Do you have plans to organize official tournaments with prizes?

We have a custom tournament creator that allows you to create a tourney with up to six events. They can have any game mode, level and settings you want. And yes! We plan on doing some official tourneys with prizes.

Going forward, do you intend to release additional content for GRIP such as new tracks, modes etc.? If so, will the content be free or paid?

There will be post-launch content, indeed. Cars, rims, tires, tracks and possibly game modes. All tracks and tires will be free, the rest will be paid, but nothing unreasonable.

Some users have asked you about VR support and you replied that it could happen after launch. Is that something on your roadmap?

VR is not currently on our roadmap, no. It's something that we'll only think about if we have a great response to the regular version of the game. Would be crazy though!

With Sony tentatively opening the cross-play gates with Fortnite, would you be interested in potentially adding cross-play between PC, PlayStation 4, Xbox One and Nintendo Switch players?

Cross-play is not in the books right now, but potentially something to think about post-launch. We just can't complicate things currently.

Was it hard to get GRIP running on Nintendo Switch hardware? Did you have to make any significant sacrifices to image quality?

Nintendo Switch is a really cool platform, but it comes with its challenges. The physics in GRIP are really complex, with the car driving on walls, ceilings and both sides. So we had to make some cuts visually for Switch to help with performance. The game is still fun as hell though!

Obviously, a high-end PC is going to trump any other platform, but each version of the game is very playable and fun. All of them support split-screen play, with two players on the Nintendo Switch and four players on all others. Xbox One X and PlayStation 4 Pro both support higher resolution and look great. As for HDR, it is supported on both of them.

Beyond GRIP, would you use Kickstarter again for crowdfunding for your next game?

Kickstarter was an interesting endeavour. It's difficult because it involves promoting the campaign, as you'd market a game normally - except the product is not guaranteed to be made so people are wary. The days where people blindly trust Kickstarter projects is over. You really have to earn people's trust and show them something exciting.