Although its too early to talk about Android Q, mostly due to the fact that a lot of devices are yet to receive the update. We got our first glimpse at Android Q last month via a leaked build. Since then, a lot of upcoming features have been spotted online, including one that gives carriers a lot more control over the devices they sell. Like all previous releases of Android, Q will make its way to the Pixels before rolling out to other OEMs. Today, GSMarena spotted a Google Pixel 2 running Android Q on Geekbench 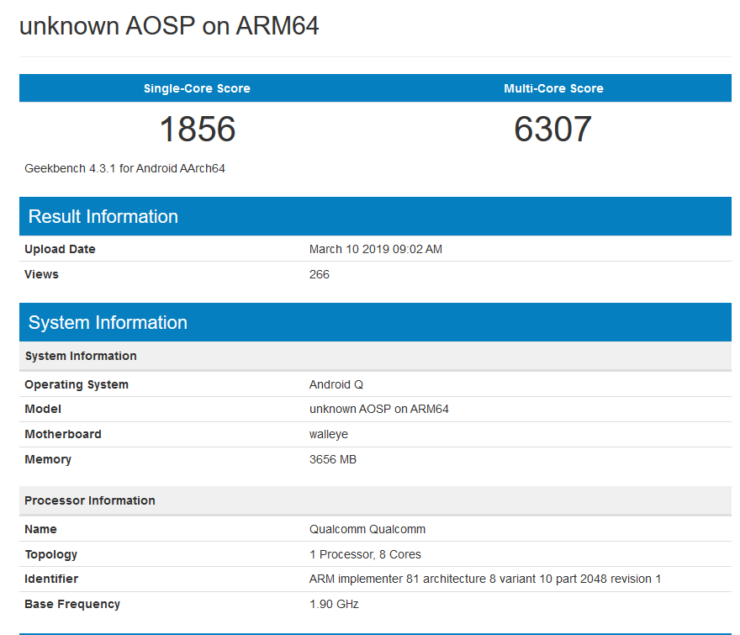 The listing says it's an unknown device running Android Q AOSP on ARM64 processor, but we all know what the "walleye" codename means - Google Pixel 2. Other aspects of the benchmark add up too. The Pixel 2 running Android Pie scored around 1900 in the single-core test and 6400 in the multi-core test. A lower test score is indicative of the fact that the version of Android its running is unstable.

The Android Q developer preview, much like its predecessor may be available to more devices this year thanks to Project Treble. Last year, there were eight OEMs including Pixels that received the Android Pie beta. The number is bigger for the upcoming Android release, but we don't quite know the OEMs involved just yet.

The beta will very likely be revealed at Google I/O later this year, followed by a full-scale release after a month or two. The fact that there is a Google Pixel 2 in the wild that is already running the build indicates that the work on Android Q is going on in full force. Android Q is touted to be the most privacy-centric version of the operating system. Its new permission system gives users more control over what an app can or cannot use.