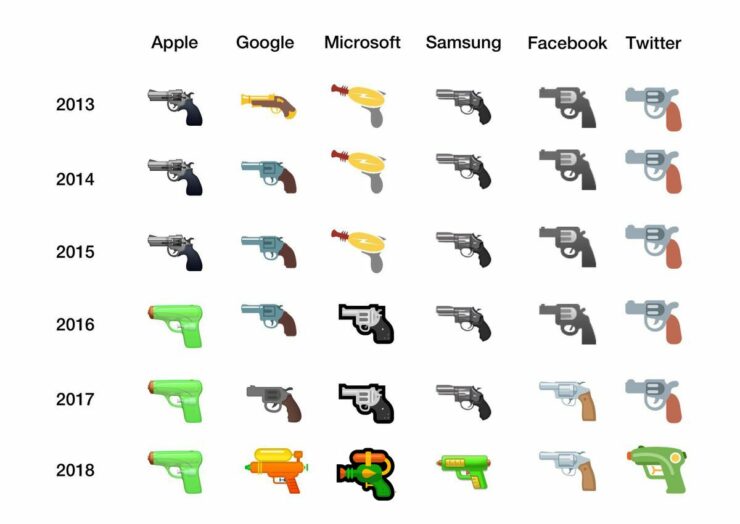 Amid an intensifying debate on gun violence in the United States, Google announced earlier today that the company will be updating its gun emoji to switch to a water pistol. This update for Android users follows an emoji design that is already available to those on iOS. Facebook too has promised to use a water gun instead of a real pistol.

Following Google and Facebook's switch, Microsoft probably suffered from FOMO or was scared that it will be the only company touting a real gun and has tweeted only hours after Google's announcement that it will be updating Windows 10 gun emoji, as well.

Apple started this shift to water gun emoji but really Microsoft was the first...

Apple was notably the first company to take this then-controversial stand in 2016. But this small change in emoji has since pushed all the major tech companies, including Samsung, Twitter, and WhatsApp, to go for a water pistol design.

However, technically Microsoft was the first company that avoided using the real gun. The company had a toy ray gun emoji and only moved to a revolver in 2016 - ironically, only 48 hours later Apple ditched it and started a domino effect.

Following Google's announcement of switching to a bright orange and yellow water gun that made Microsoft look like the only one holding the handgun, the Windows maker has tweeted that its own brightly colored water pistol emoji will be coming soon.

We are in the process of evolving our emojis to reflect our values and the feedback we’ve received. Here’s a preview: pic.twitter.com/BlB3yYTSht

It should be noted that this decision isn't probably being taken to be a part of the gun control movement. Emojipedia reports that this is mainly a desire to be consistent with other platforms, which plays an important role in the emoji-world making sure that if someone sends a water pistol emoji to a friend, it appears similar on a different platform, avoiding chances of miscommunication.

In 2016 when I asked if Google planned to change their gun emoji to a water pistol, the answer was "we'll see". Implied: we'll change ours, if or when others change theirs. And now they have. https://t.co/lKzrMoSNys pic.twitter.com/KGTlFLmOn9

It isn't immediately clear when Microsoft will implement this change in Windows 10, but the company was certainly quick to get itself out of the awkward position created by Google's decision.

Is Google Blocking Microsoft’s Chromium-Based Edge Browser? Not Yet