Samsung's expected to overhaul its devices significantly this year, particularly if the hype surrounding the upcoming Galaxy S6 and S6 Edge is to be taken for its word. But flagship smartphones isn't the only are the company seems to have under focus it seems like. Samsung's also expected to launch the upgrade to the Galaxy Tab S lineup this year and go full on against Cupertino rival Apple. The Galaxy Tab S2 is expected to come with two screen sizes as before, and today, the 9.7 inch variant of the device seems to have been posted on GFXBench. 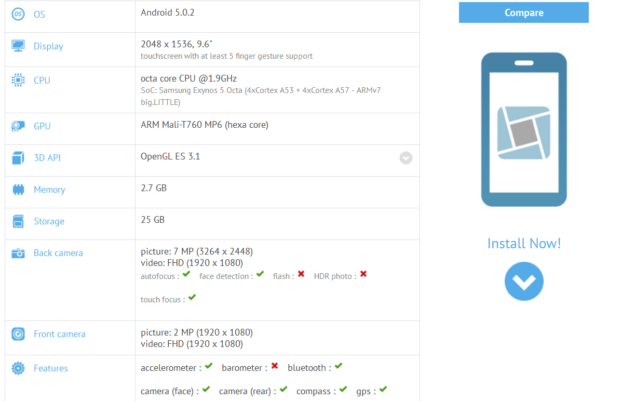 Specifications for a device that appears strongly to be the 9.7 inch variant of the rumored Samsung Galaxy Tab S2 have surfaced on the GFXBench benchmark website. The device is equipped with or the Exynos 7 Octa or the Exynos 5433 which is already found on some of Samsung's devices launched previously. A detailed look at the specifications can be taken here. GPU for the Galaxy Tab S2 is the Mali-T760 with RAM capacity of 3 GB. The variant tested on the GFXBench website comes with 25 GB of native storage, though this can be expected to increase with the help of a MicroSD card.

Rear camera for the device posted today comes with a resolution of 7 MP with FHD (1920 x 1080) video recording present on board. The latest iteration of Android, Android 5.0.2 is also present on the device. All in all, if the device posted today is indeed the Galaxy Tab S2, then we can expect another well spec'd device from Samsung indeed. But perhaps the main selling point for the Galaxy Tab S2 will be its overall design rather than its specifications, though one can't expect a device in the Android world to survive without good specifications either. Stay tuned, we'll keep you updated.