While there are no actual photos of the board itself, the picture and specifications on the packaging is enough to give us a representation of the features the new motherboard would include. First of all, the Z87X-UD3H features the LGA 1150 socket to support Haswell processors. It comes with a Black, Blue and Gray color combination and has three sets of heatsinks, two sitting on top VRM phases and a single sitting on top the Z87 PCH.

For expansion slots, the motherboard features three PCI-e 3.0 x16 slots, three PCI-e 3.0 x1 slots and a single PCI slot. It offers both SLI and CrossFireX functionalities. The price was not mentioned but it would be cheaper than the high-end Z87 motherboards that Gigabyte has to offer on Haswell's launch. 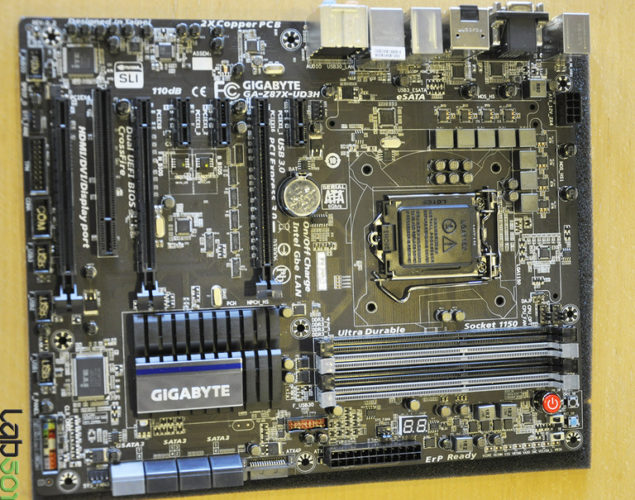 It can be noted from the teaser picture that Gigabyte’s Z87 G1-Killer would include an internal liquid cooling solution. This hybrid cooling solution has been available on ASUS’s Maximus V Formula since quiet some time. Gigabyte’s thermal solution would offer both air cooling through heatsink and liquid cooling through an internally built water channel that would transfer the coolant through all-copper made heatpipes. Additionally, Gigabyte would be equipping the board with their Ultra Durable components such as IR3550 PowIRstage, 2X Copper PCB, High Capacity Ferrite Core Chokes. In short, the motherboard would feature the completely new Ultra Durable 5 design along with added features since its a gamer friendly motherboard.

The Gigabyte GA-Z87X-OC comes with an 8 Phase Solid VRM which makes use of DRMOS, International Rectifier MOSFETs which provides overclocking best stability and reliable power supply. The motherboard has a orange and black design scheme and it can be noted that since it has no heatsinks yet, the motherboard is still in its Eng. state, we will see the complete version of the board a bit later around Computex 2013.

As for features, the GA-Z87X-OC has several buttons for overclockers on the board. These include BCLCK, Turbo, Gear, Power switches at the side of DIMM slots, Voltage measuring points, Debug LED and a Dual BIOS switch. There’s also a LN2 switch which can disable the Dual BIOS option on the motherboard. The Z87 PCH is covered with a blue heatsink which is also not a final design, comes with Four PCIe 3.0 x16, 2 PCI and a single PCIe x1 slot.

Power is provided through an 8 Pin + 4 Pin connector which adds additional juice to the CPU for overclocking. The LGA 1150 socket is built to support the upcoming Intel core Haswell processors which would launch on 2nd June 2013. 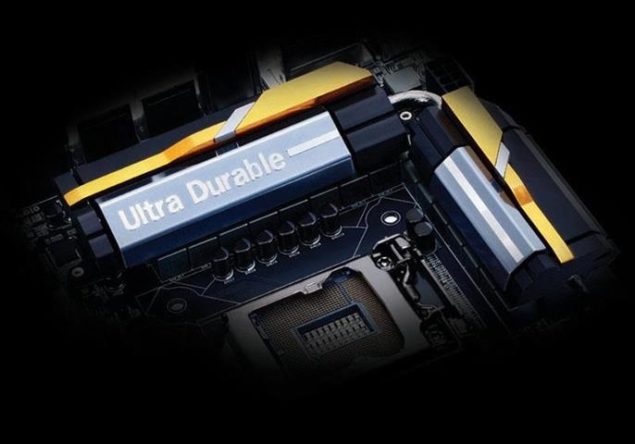 GIgabyte is also preparing and teased their what is supposed to be the GA-Z87X-UD5H motherboard. LAB501.ro revealed images of the board during CeBIT 2013 so we can spot some similarities. The motherboard is a cut down version of the Z87X-OC, comes with its own Gold and Black color theme and features the Ultra Durable 5 parts. It has a 16 Phase VRM, an 8 Pin connector for CPU Power delivery, several overclocking features, 10 SATA 3 ports. three PCI-e 3.0 x16, three PCI-e 3.0 x1 and a single PCI slot. More can be seen below while full details can be seen here.