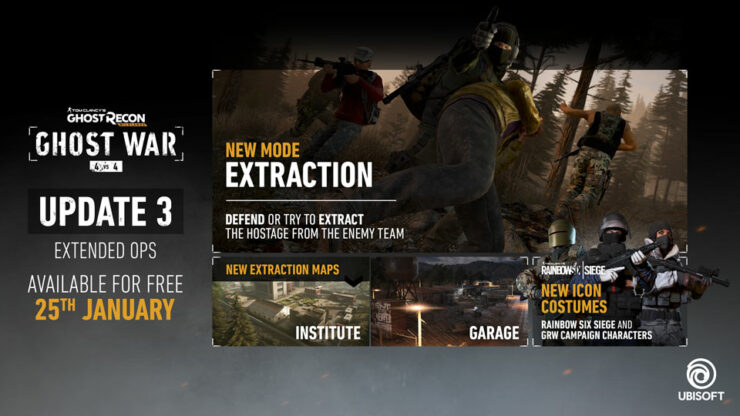 Ghost Recon WIldlands is getting another free update today called Extended Ops, mostly geared towards the Ghost War PvP. The update is estimated by Ubisoft to be 8GB in size on Steam, 14GB on UPlay and up to 13.5GB on consoles.

A brand new mode, Extraction, will be added to the game with two dedicated maps. You can find more information about it as well as a trailer below.

In addition to the new Extraction mode, we are also glad to bring colorblind options to both the campaign mode and Ghost War. We have been in touch with several colorblind community members in order to add visual options that address all kinds of colorblindness. Should you have any feedback to share with us on this topic, please don’t hesitate to share them on the official forums.

Also, great news for PvE players: Fallen Ghost weapons are now available in the campaign mode, to the condition that you have installed Fallen Ghost on your version.

Extended Ops is also introducing Battle Crates that are designed to offer you an additional and accessible way to complete your cosmetic customization experience, for both the Campaign and Ghost War modes. For more information about the Battle Crates, please read the dedicated FAQ.

In Extraction, teams take turns in defending or attacking a compound to extract a hostage to safety. Two hostages are located on the map, but only one of them needs to be extracted to win the game. If you are in the defending team, you role will be to prevent the opposite team from grabbing the hostage located inside your safe zone. The attacking team has to localize the hostage, grab them and escort them to their own safe zone, without being killed by the defending team.

Extraction can be played on two maps for now, with more maps to come in the next update. Those two maps are available for both Quickplay and Ranked.