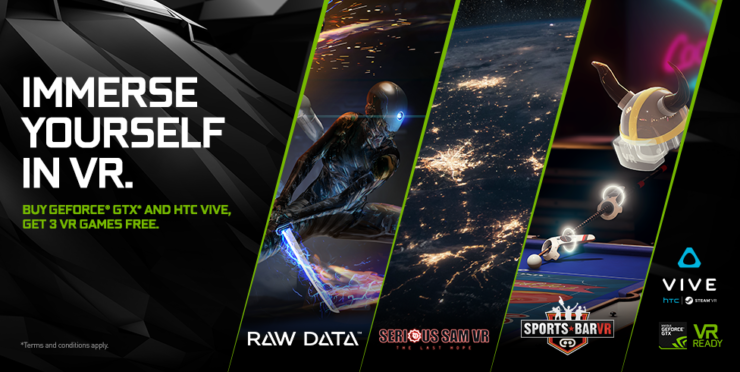 There's a new GeForce GTX/HTC Vive bundle available, in case you were planning to get both a new graphics card made by NVIDIA and the VR headset by HTC.

Starting today, customers can purchase a GTX 1080/1070/1060 GPU, system or laptop and an HTC Vive headset at participating retailers to receive the following three VR games for free.

●  Raw Data, from Survios, is one of the most immersive and exciting Virtual Reality games available.  Built from the ground up for VR, Raw Data’s action combat gameplay, intuitive controls, challenging enemies, and sci-fi atmosphere will immerse you within the surreal environments of Eden Corp.  Go solo or team up and become the adrenaline-charged heroes of your own futuristic techno thriller.
●  Sports Bar VR (also known as Pool Nation VR) from Cherry Pop Games and Perilous Orbit, is the coolest VR space on the VIVE.  Hangout at the air hockey tables, shoot some pool, throw a few rounds of darts, take part in the time-honoured pastime of throwing empty beer bottles against the wall... and you won’t have to clean up the mess!
●  Serious Sam VR: The Last Hope, from Croteam, lets you become Serious Sam and lets you fight Mental's alien hordes with your own two hands.  You will step into the shoes of the Earth Defense Force's greatest hero in this unique VR simulation based on Sam Stone's own log files from his time as captain of the Battlecruiser Saratoga.  Experience the missions that turned Captain Stone into the legend that he is today.

However, it appears that this GeForce GTX/HTC Vive bundle is only available in North America, United Kingdom, Deutschland, France, Sweden, Czech Republic, Russia and Taiwan for the time being.

Upon choosing a country, the full list of participating retailers is revealed. Do you intend to take advantage of this offer? Tell us in the comments.