Gears Tactics is the latest grub smashing entry into the long-running Gears franchise. This time around however you'll be shaking the formula up with an XCOM style strategy mix rather than a cover to cover over the shoulder shooty game, and that brings a bit of a different angle (literally) in the way the game's performance works. Powered once again by the Unreal Engine 4 we see Gears Tactics take place before the events of even the first game and acts as a prequel to the entire series. But enough of the story, if you want those details you'll want to check out our Review where Chris gave it an 8.5.

Backing up to the graphics portion now. The game is powered by the ever evolving Unreal Engine 4 and is bringing some very interesting graphical options to the mix. There's the recurring dynamic resolution scaling ability that allows you to set a minimum framerate and the game will scale accordingly to try and keep you above that minimum. It works decently well so long as something like Temporal AA doesn't bother you and you're okay with a softer edged image. They did give you a new option to tackle a performance hit from within the lines with Variable Rate Shading (VRS), we'll get into that one towards the end. There are some really impactful options in this one revolving around reflections because of the nature of the camera in this game.

Gears Tactics makes use of Unreal Engine 4's support for Planar Reflections that are quite a bit better than Screen Space Reflections due to the fact that they can reflect objects that are just offscreen rather than simply those in the screen space. There is a cost to this and it is most certainly in the performance category. We did have this option enabled for all the testing, but disabling Planar Reflections and Glossy Reflections can result in noticeable performance improvement. That is something worth keeping in mind as you look over the results.

Gears Tactics comes packed with a very nice built-in benchmark utility that does a very good job replicating typical gameplay. There is a little bit of variance between the runs so it was imperative to have several in order to average them out to get an idea of where performance lies. As far as settings go we found that not all presets meant the same for each graphics card so we manually set everything to what we're calling the "Max" Setting for the testing. It is also important to note that a tactics game like this doesn't really benefit from high refresh rates in non-competitive scenarios outside of smoothing out the game since you're reaction speed and being able to spot small movements isn't key to winning.

Testing presets at 4K gives us a couple of quick metrics before diving into the game too deeply.  First off, it shows us how the game looks at various presets as well as how performance scales with those settings. Gears Tactics scales quite a bit visually and in performance between Low to High, but once you get to high the differences become much more subtle when going to Ultra or to our Max Preset we used for testing.

The Low Preset is generally quite ugly, but if you're on the lower end of the spectrum and don't care about the bells and whistles you'll be able to push into some really playable framerates on a potato, I was able to play this one at 720p Low and stay over 30 FPS on a 15w Ice Lake CPU (will get into that one in a later review). Medium really cleans the image up, so if you're having issues getting good performance on older hardware maybe give this one a go and couple dynamic resolution in the mix.

We recently added in this section as a representation of what to expect in scaling at 1080p. We went with the more entry level Radeon card on this one to offer up a bit of contrast to the GeForce powered 4K testing.

Note: The additional GPU Bound Percentage is based on the percent of the GPU that was in use as reported by the in-game benchmark results screen.

Variable Rate Shading, first introduced to the market with the GeForce RTX line of graphics cards, received its own API thanks to Microsoft's efforts as revealed at the latest Game Developers Conference. It has also received support and implementation on the latest 10th Gen Ice Lake iGPU from Intel and will be part of the key components of their Xe architecture. Radeon will also be bringing support with their next-generation RDNA2 based GPUs as the Xbox Series X also supports VRS.

The first game to support this feature was Wolfenstein II: The New Colossus, which got it via patch last November. But, the big kicker with Gears Tactics is that it was available on day one and in the DX12 API rather than Vulkan. I will say before looking over the images and the results are that it is quite aggressive, but manages to claw back quite a bit of performance. 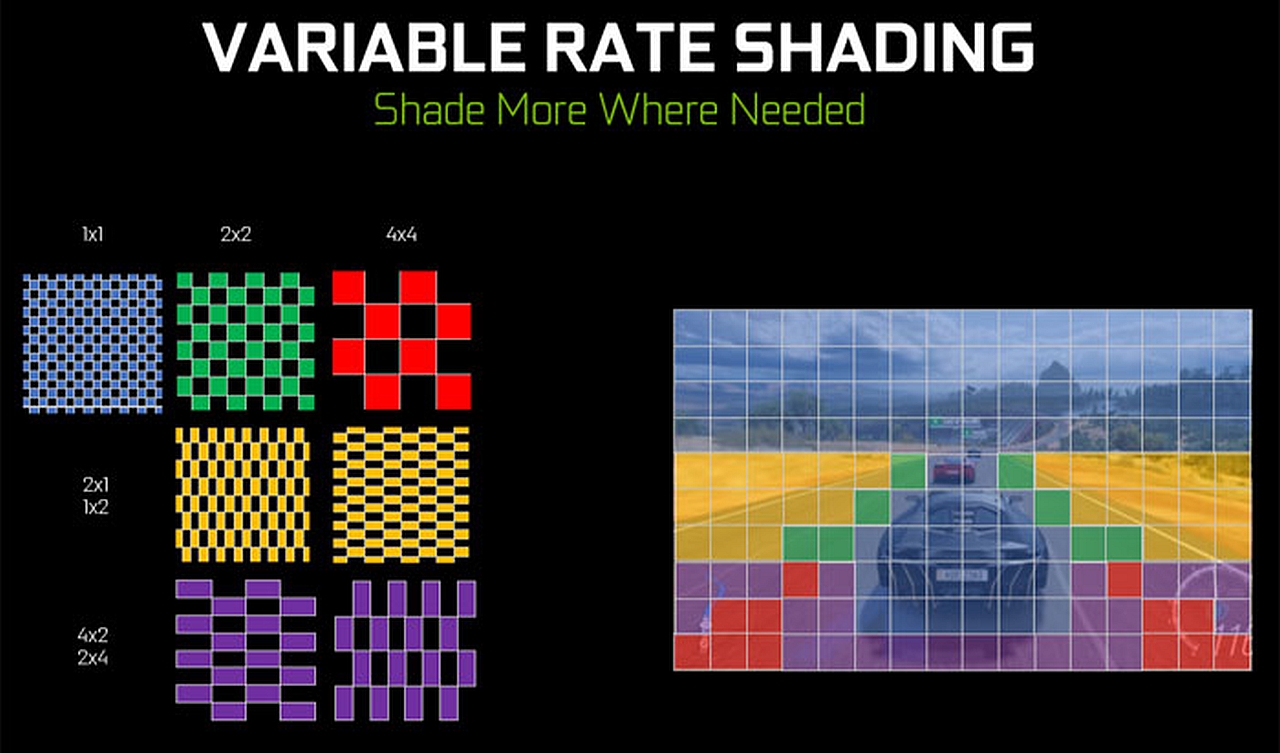 While you can get an idea in the images above here's a very zoomed in cut from each one showing what is going on in a very isolated section. This showcases the impact on the shading going on displaying that the impact while turned 'On' is clearly there it's much harder to discern while playing than 'Performance' as that mode is very aggressive and impacts the visuals greatly. If this were a fast-moving action shooter or racer I don't think it'd be that noticeable, but you're generally not moving quickly in this game so you'll likely notice it.

And claw back performance it does! Although the Performance settings is a bit too aggressive in my opinion. Simply turning VRS to ON will effectively jump your Turing based GPU up a rung in the performance category. This could allow you to turn on those gorgeous Planar Reflections and mitigate the impact a bit. The big difference here for me is that while Dynamic Resolution can maintain the shader integrity this can maintain the resolution crispness, it'll be up to you which is more valuable to retain for yourself. But, it is nice to see this feature making its way into more games and become available at launch in one of the most widely used game engines.

Truthfully Gears Tactics is a bit of a booger to squeeze out super high framerates while having the settings turned up. Seeing some of the 1080p focused cards fall below that 60 FPS line is a bit disappointing on the surface until you take a few things into account. The first being that we hit these cards with everything the game has to offer, and it has a lot. So simply dialing the details back even slightly will net you very nice performance increases. So you'll want to decide what shiny stuff you want to keep, and even if you want to keep it all you can turn on that Dynamic Resolution and go to town.

The other consideration is simply the type of game you've got there. I'm likely to be gunned down for saying this, but if you can hold over 45 FPS you're going to be in for a good time here. Gears Tactics isn't a twitchy style game at all. It's all about careful planning and pacing. This makes it the kind of game you're going to want to push the detail settings up in because you're going to be spending a lot of time looking at the scenes.

There are enough options here to tweak the game to get your desired performance and all of them can be done on the fly without the need to restart the game. One of my favorite options is the ability to turn on certain features just in the cutscenes where they will really pop but can get lost in the fray of the gameplay, might be worth a check if you want it super pretty for the exposition but don't want to lose a frame during the explosion! Time for me to Smash One Grub and get back to see how this storyline unfolds.