It's no secret what my feelings are when it comes to Gears of War as a series, I explained as much in my preview of Gears Tactics at the end of last month. Simply put, I don't really enjoy my shooty-bang-bang fun being taken up by me essentially becoming one of the ducks in the duck-shooting carnival games. If I wanted that, I'd just start up Rainbow Six: Siege. Gears Tactics, on the other hand, gives me a reason to love the cover, the chest-high walls, while remaining firmly rooted in the series in every way possible. 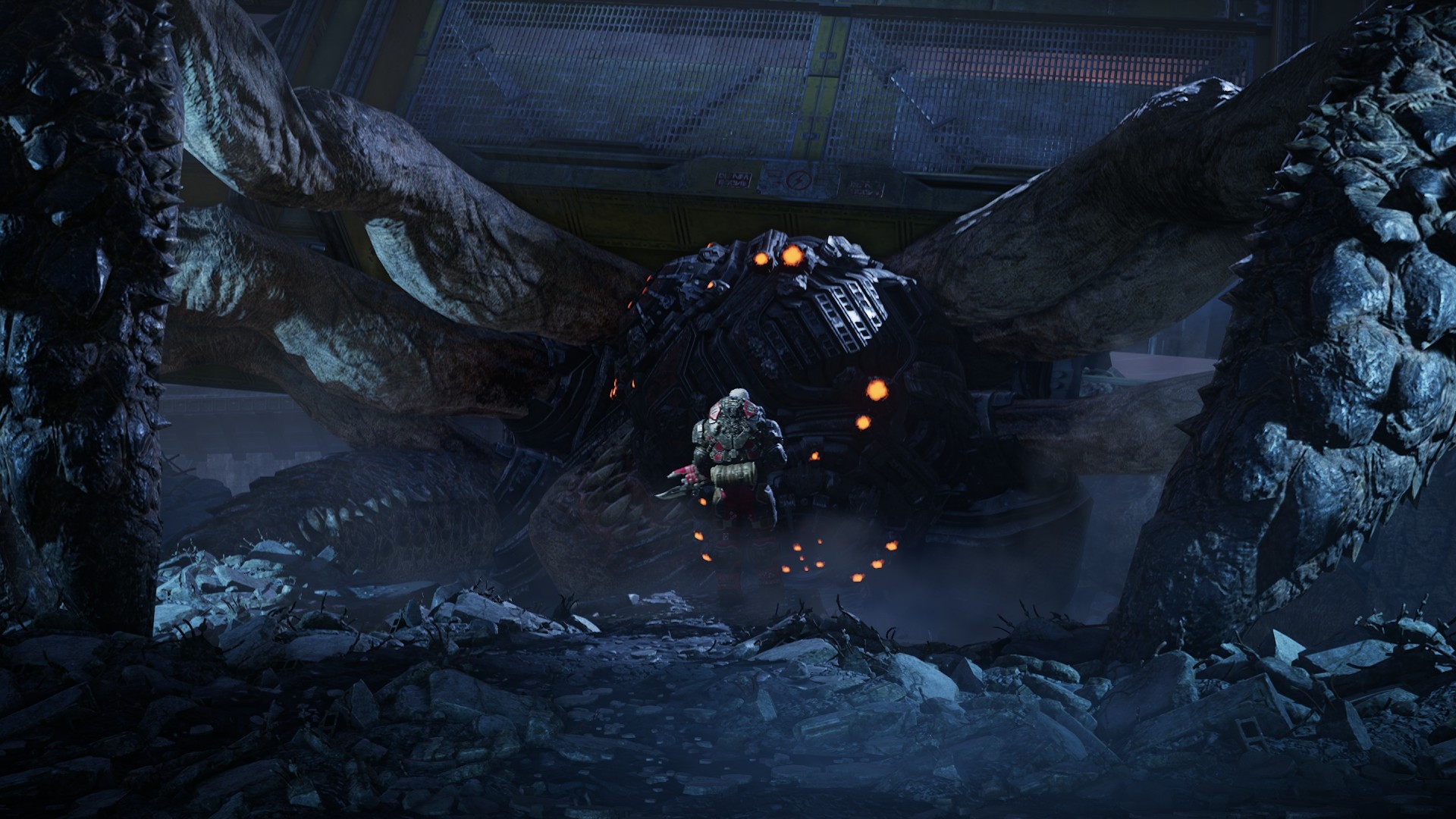 So we've got big burly men in suits fighting off an invasion. Yep, that's about the gist of it, because let's face it - the series is notoriously terrible at any form of real development. Whenever they got to the talky bits in the past, I found it easier to just zone out. The talk of dead or missing relatives juxtaposed with the ooh-rah macho nonsense, the glib one-liners or the foiling of Locust or Lambent plans with nary a thought towards character development made my brain crave more alcohol than my liver could handle. That and the story of Gears, what I remember of it, is just bad.

On the subject of dead relatives and bad storylines, Gears Tactics subverts the former and mostly continues with the latter. So rather than having a character that is whining about a dead relative, here you take on the role of a dead relative - you are Gabe Diaz, father of Gear of War 4 & Gears 5's protagonist, Nate Diaz... I mean Kait Diaz, and in traditional Gears fashion, you're a big burly hulk of muscle. Not a ghost though, this is Gabe twelve years before the events of Gears of War, two years after emergence day.

This isn't a simple kill all the baddies story though, here you have to kill one particular baddie. That is Ukkon, who you may know as the Locust scientist that created big creatures from the series like the Brumak and the Corpser. I didn't know this before playing Gears Tactics, because I don't know if Ukkon was covered in one of the five core games or if it was in one of the comics or books, but I know now and so do you.

As you progress through the story you'll find yourself fighting the Brumak, the Corpser and so many other recognisable members of the Locust Horde as well as quite a few lines you've heard many times before ("scratch one grub"). You'll also find yourself meeting up with some of the Stranded - people left behind after... 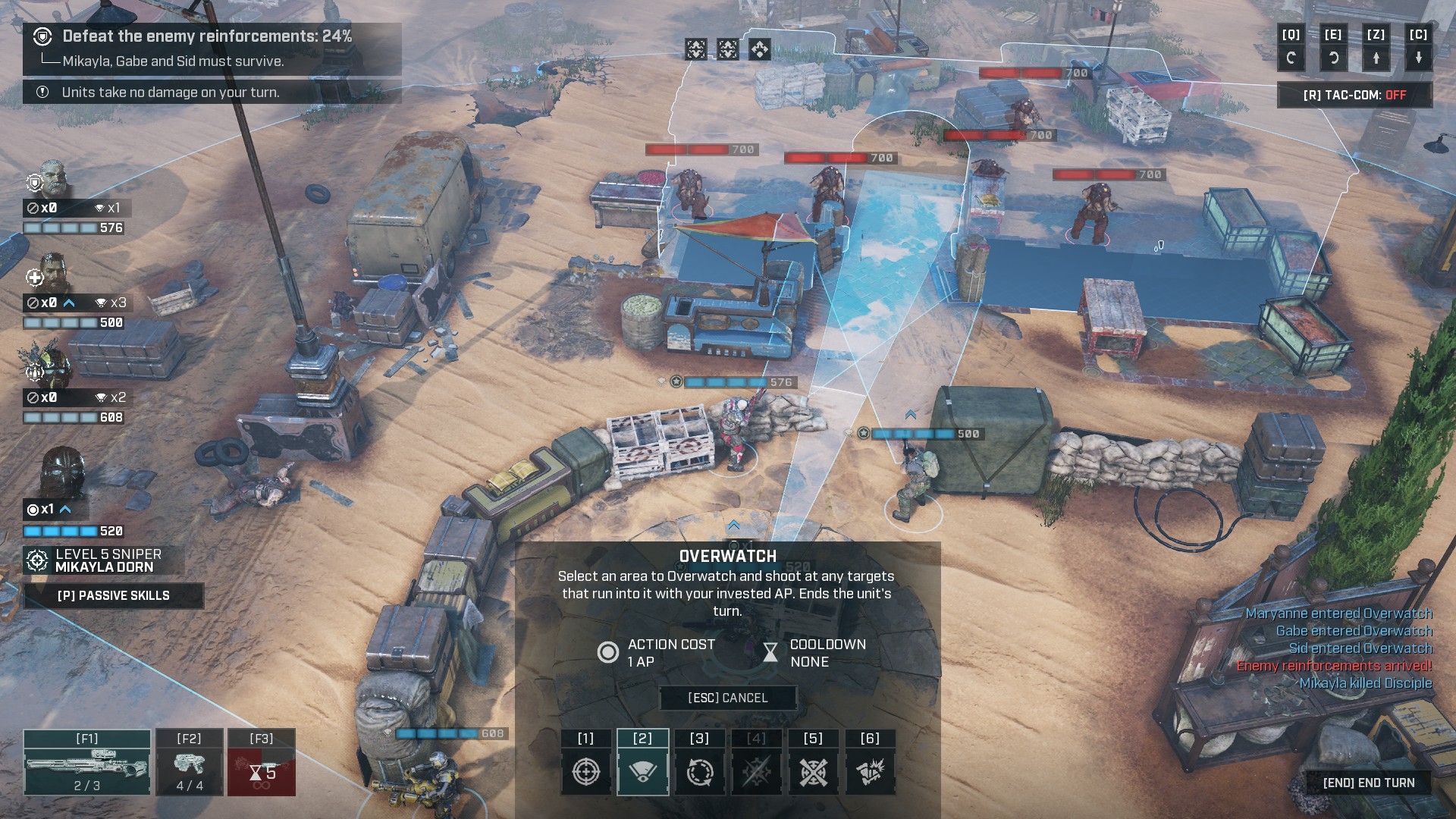 You know what, I'm not going to try to explain. I've already told you that the story is standard Gears of War, so mostly poor. There are some good elements. Some of the characters, particularly Gabe, seem to have actual personalities. Indeed, there's even some character development with Mikayla Dorn. I would argue that The Coalition, who have contributed to Gears Tactics with developers Splash Damage, are better at writing Gears of War games than Epic.

Some surprises happen, there are some twists and turns along the way. Secrets, abilities - everything you've encountered before in similar games. There's nothing here that will make the game stand out as a beacon of storytelling and scriptwriting.

Will you get invested in the story? If you've found yourself interested in the franchise so far, yes. If you haven't, no. Will it make sense and is it backed up by some fantastic voice acting, enhanced by characters that I can't help but find more relatable than others in the series? Yes to all of the above. Gears Tactics looks great, sounds great, and plays fantastically. That's the real selling point of these games, the gameplay. Even XCOM can't be praised for its story, with the best being from emergent gameplay above anything else.

Before I get to gameplay, let me expand on the 'looking great'. It's brown and grey in traditional gritty-Gears fashion. The textures are fantastically detailed, character, enemy, and building models are all top-notch and the animations are - for the most part - brilliant. I mention this now because I want to highlight that the dullness of the greys and browns can be broken up, thanks to character customisation. You can paint your equipment all sorts of vivid colours if you want to, letting your characters truly stand out as a fashionista in this drab, dull, world of death, despair, and Locusts. 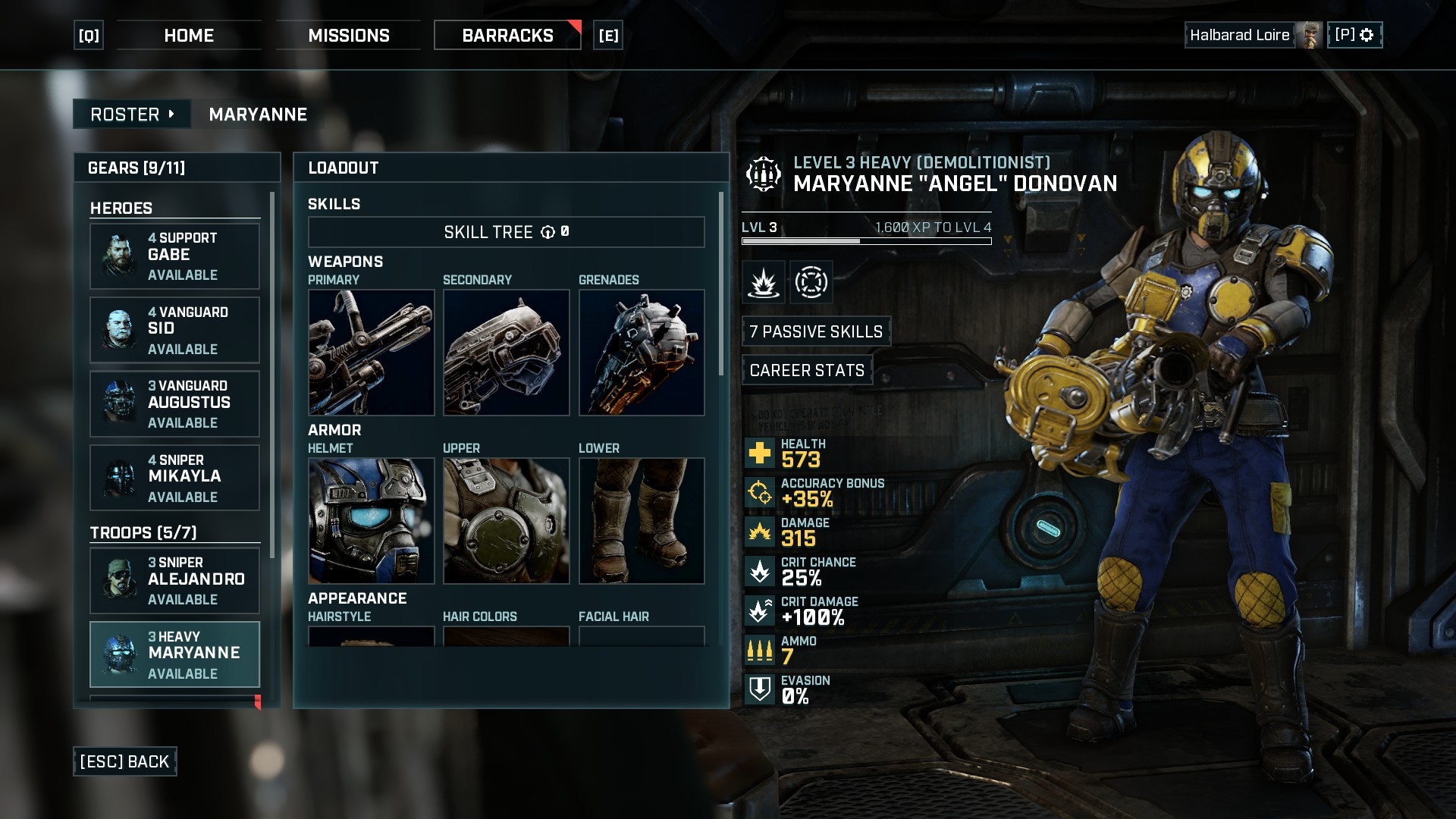 I've teased talking about the gameplay for too long now. It's excellent. It's up there with any other turn-based tactic game you could think about. The core gameplay is very much what you expect from a game in the genre. Your units have a set number of action points - though this varies depending on equipment & more - and you have to choose to move, attack or use abilities like overwatch or whichever you've selected while levelling up your characters. That or you could chainsaw an enemy to death.

So, when it comes to character customisation, the class and - as a result - weapon is set. You can get other types of weapons by killing specific enemies and picking theirs up, but they have limited shots and are for that specific moment. This is to say that there is no grand-strategy style base building or development. The way you develop your characters is by levelling them up, selecting their skills as you level up, as well as equipping armour and attaching weapon upgrades that are collected from battles, either by completing core and side objectives or sending a unit to crates that happen to be on the map.

The structure of Gears Tactics is fairly simple. You'll move from story mission to story mission, but now and then there'll be an interval where the game has you do side missions. The number you need to do depends on what act of the game you're in and there are four different types. Think of these as the randomised missions in XCOM, where you'd get whatever objective it is in a map re-used or so very similar to that of recent story missions. 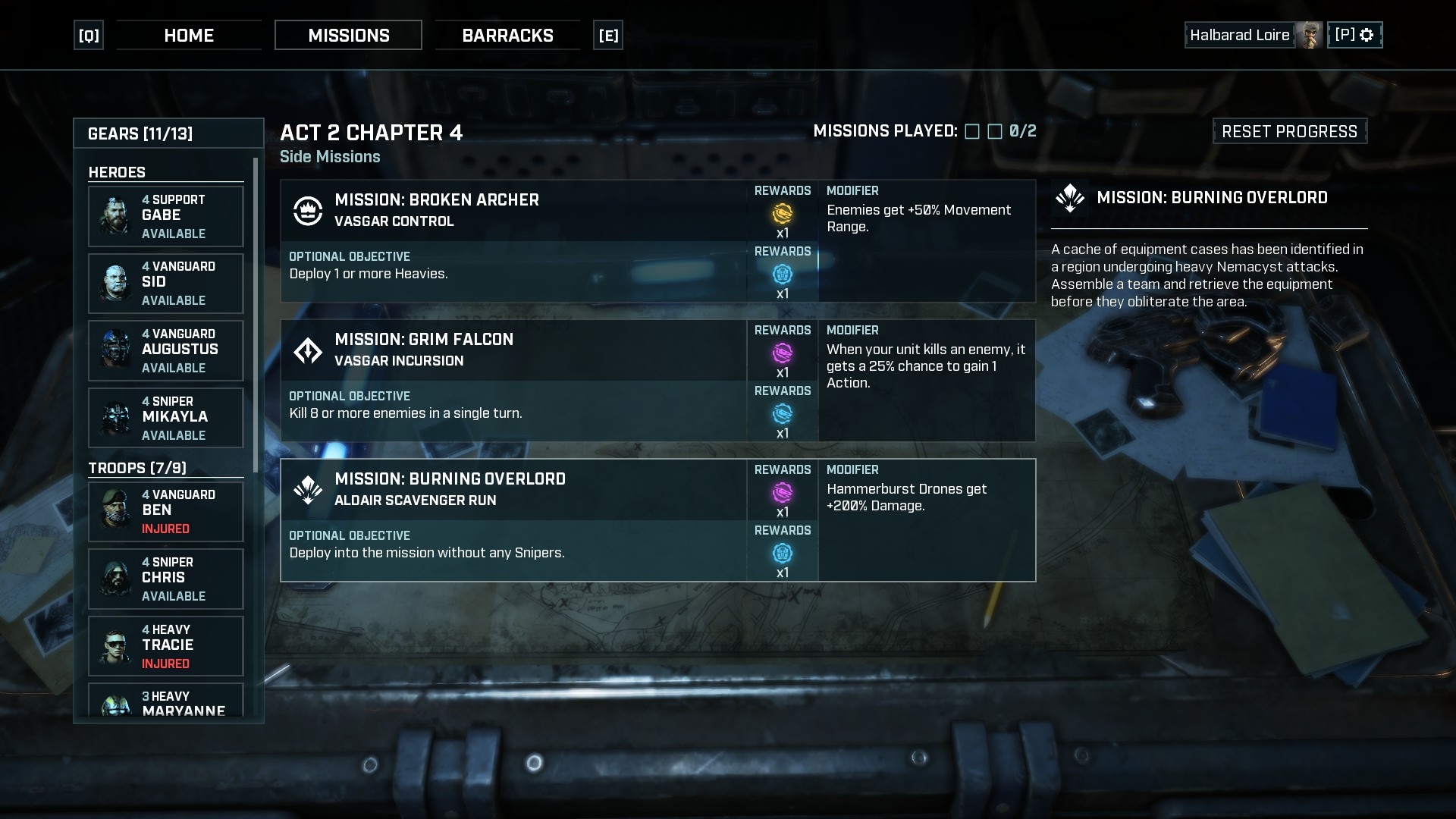 All of this sounds so very similar to other games in the genre, so what makes it stand out other than being well developed? Gears Tactics does have some interesting features. Using cover is naturally a major element and the game encourages you more than normal to head into it. When moving, your range can actually be extended by around 5% if you're going to be finishing in cover. It's a great little tweak that I now think every game should have - think of it as a sprint mechanic, a soldier would naturally give that extra bit of exertion to end in a safe position.

Another element is the multi-stage boss fights that resemble the Gears of War games more than I ever thought it would. The pattern recognition you've required for creatures like the Brumak and Corpser is here in fine form, only now you have a camera angle looking down above you and you've got that bit more time to plan your moves. More than that, you plan the team based on the sort of way you want to win, with what are essentially four skill chains per character and the aforementioned use of action points.

I should mention another interesting feature here, related to action points. When shooting an enemy you can put them into a downed state, rather than dead. In this state, you can run up to them and perform a brutal Gear of War finisher on them, which also gives all of your other units an action point. Beware some enemies' death-abilities though, like one that spreads a poison cloud. Also, be wary of emergence holes where the enemies will try to dig up and flank you, prepare a grenade.

So, you have a certain number of action points but you're not restricted into a movement and attack phase - you do whatever you want with those action points. It's a level of flexibility that I can't help but admire, especially in a game from an oh-so-rigid series. This, combined with a very strong enemy AI that will challenge you as well as a selection of core story missions with enough variety to keep you interested, Gears Tactics stands out as having excellent gameplay that I honestly didn't expect from the spinoff. 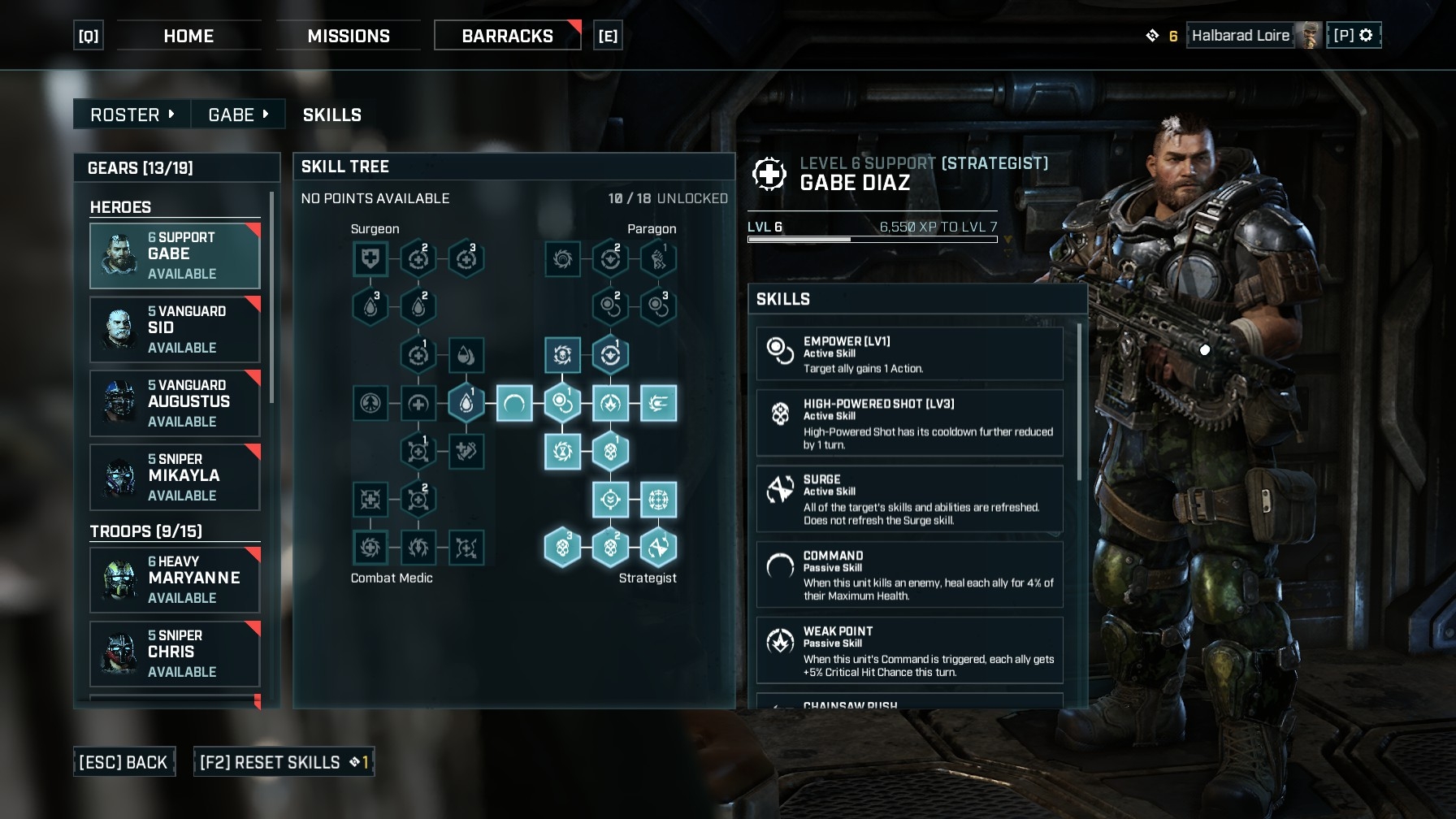 All of this praise isn't to say that Gears Tactics isn't without some flaws. I've noticed a few bugs and issues here and there, though honestly nothing that truly detracts from the game. Some are even funny. One such example is where my Sniper, which I named after myself, would randomly disappear. I'm all for stealth technology, but it just doesn't have the same effect when the grubs can see a floating sniper rifle - it gave them something to target.

Okay, so that's more an amusing anecdote than anything serious. The real issues can be with how imprecise, at times, the game wants to be. When I'm going in for an execution I want to choose where my character finishes up, ideally in cover. It's very irritating when the game requires way too much persuasion just to let me finish an enemy off from behind. Believe me, I'm not that honourable that I won't stab somebody in the back.

This issue appears for movement in general. More than a few times I've seen the game show the cover icon, only for my soldier to stop maybe one step away and be stood there like the brain-dead Gears-of-Moron that they are. As for other issues, I can't even complain about the usual Gears of War problem where everything is a boring shade of grey or brown thanks to the character customisation letting you paint your characters armour a lovely vivid shade of purple. When you can see it. 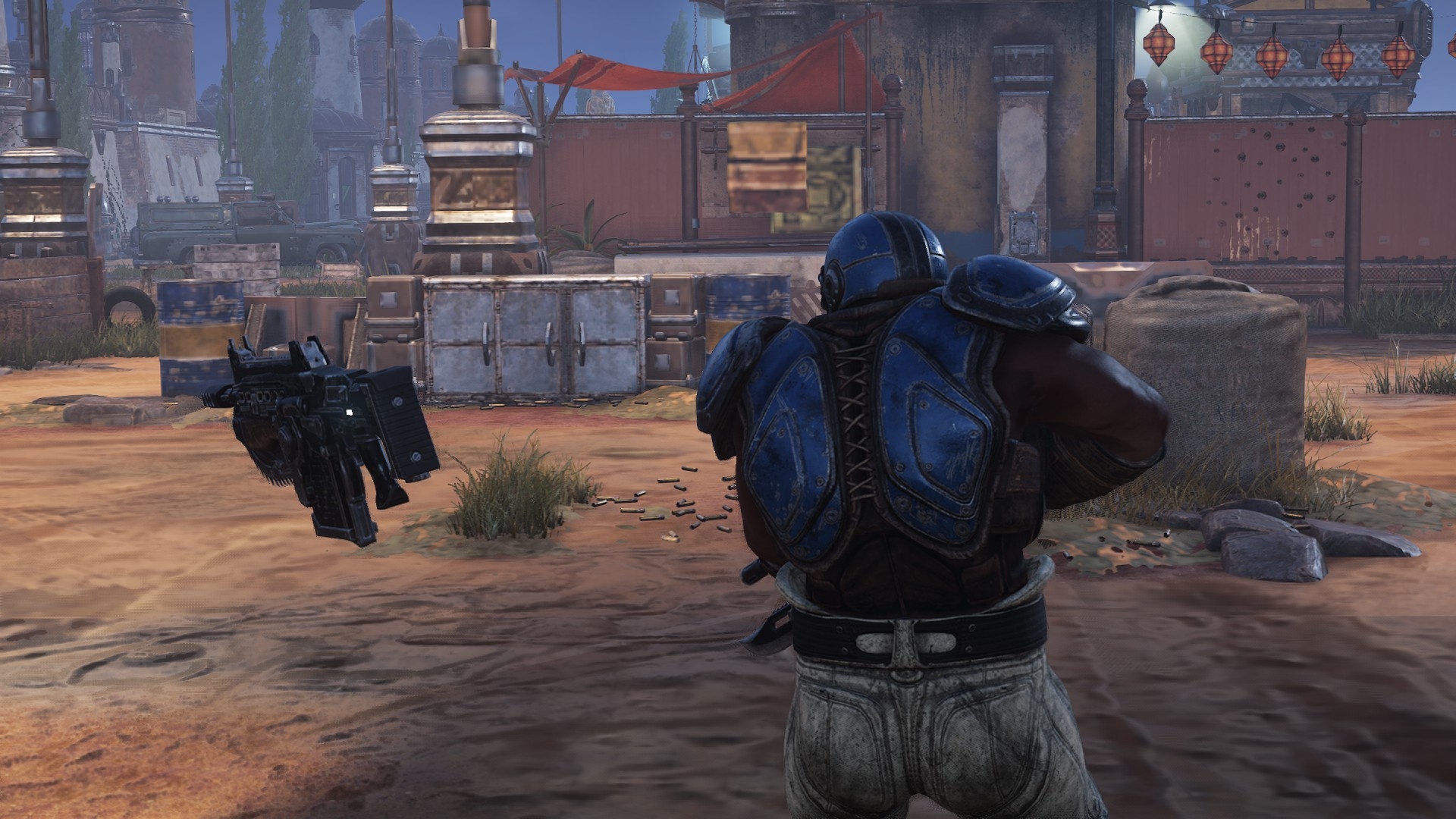 The complaints are truly minor in the grand scheme because Gears Tactics is a bloody good game. Well, that last sentence ruined this whole paragraph. This was meant to be my roundup of the review and I've just given it all away, like the lothario that I am. So yes, simply put, Gears Tactics is a bloody good game. I would argue, being the strategy aficionado that I am, that it's the best game in the whole Gears series. While it may not have the base-building elements seen in games like XCOM or Phoenix Point, the gameplay, character and team-building more than make up for it.

If I were to make a simple statement about Gears Tactics, which I will, it's that Microsoft is bucking all trends with it. Games like this are meant to be designed at the cheapest level to milk money from fans of a franchise and the most you could regularly hope for is 'average'. Gears Tactics is great. It's not flawless, but it's far better than I ever hoped it could be.

PC version of the game reviewed. Copy provided by the publisher.

Gears Tactics is, simply put, an excellent turn-based tactics game that stands up well against titles like XCOM and others at the top of the genre. While it has some slight issues, such as disappearing characters and a story that can best be described as "more Gears of War", the character development is better than the series' average and most importantly, it makes slight changes to the genre that make it a tactical joy to play. From extensive character customisation letting you specialise characters and teams, to gameplay tweaks, like adding a slight movement boost if you end in cover or removing the idea of a movement and attack phase of a character, Splash Damage has created one of the best RTT games in quite a while.