NVIDIA had recently announced the imminent debut of Adaptive Shading in Wolfenstein II: The New Colossus, the first-person shooter game made by MachineGames, via an upcoming patch. That patch just went live, so you're free to check it out now.

One of these techniques is NVIDIA Adaptive Shading (NAS), formerly known as Content Adaptive Shading (CAS). This adjusts the rate at which portions of the screen are shaded, meaning the GPU has less work to do, boosting performance.

Factors like spatial and temporal color coherence are measured each frame, and in areas where detail remains unchanged from frame to frame, such as sky boxes and walls, the shading rate can be lowered in successive frames.

Later this month, Bethesda’s Wolfenstein II: The New Colossus will debut the first implementation of NAS, accelerating framerates in the first-person shooter. 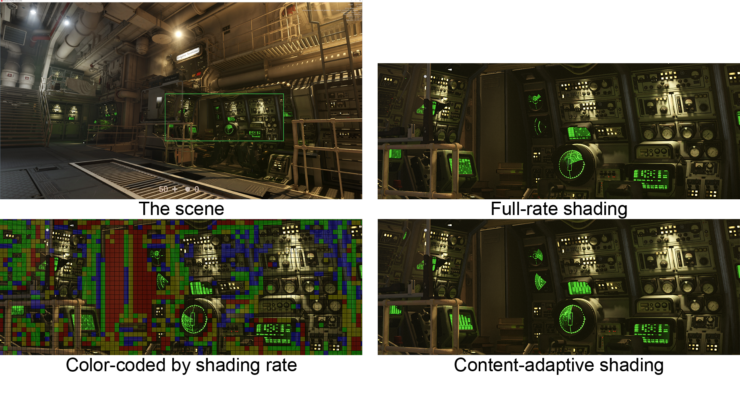 In this example from Wolfenstein II: The New Colossus, the static detail around the animated control panels has its shading rate lowered, improving performance in successive frames.

NVIDIA did not provide any hints as to what kind of performance boost users will be able to see with their GeForce RTX cards, but we'll surely revisit Wolfenstein II: The New Colossus to check it out ourselves.

It would be particularly interesting to see these performance enhancing techniques implemented alongside Deep Learning Super-Sampling (DLSS) in a game that uses extensive Real-Time Ray Tracing (RTX), in order to try and deliver solid frame rates even at high resolution.

Sadly, it's entirely up to the developers to implement the advanced shading techniques into their engines. We'll see how many teams choose to add them.