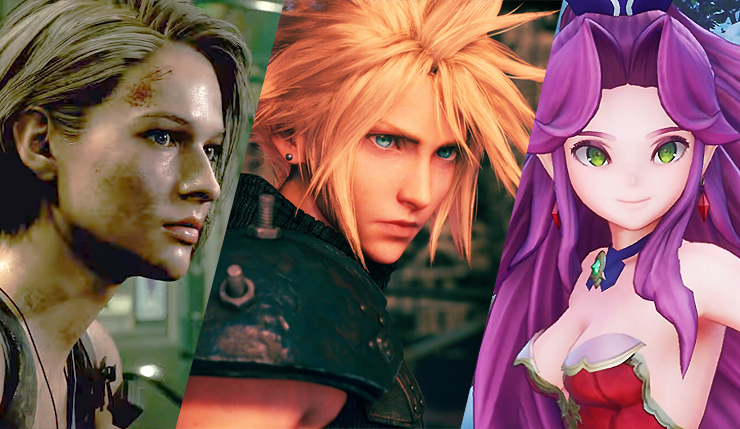 Keeping track of all the latest video games coming out is an increasingly complex task, what with multiple PC storefronts, Xbox One, PS4, Switch, mobile, and more to keep straight, but don’t worry, I’m here to help. Every month I'll be running down the games you need to be keeping an eye on, from the big triple-A headliners, to the intriguing indies you might otherwise overlook.

April was supposed to be a huge month, but delays to games like Cyberpunk 2077 and The Last of Us Part II has left it somewhat hollowed out. That said, April still features a handful of big-time releases, including Resident Evil 3, Final Fantasy VII Remake, and Trials of Mana.  Meanwhile, on the indie front we have a few standouts, including the historical survival game Help Will Come Tomorrow and the same-couch co-op romp Moving Out.

I’ve already played through Resident Evil 3, and found it to be a thrilling, albeit somewhat brief, experience in my full review...

At long last, Square Enix finally gives fans the Final Fantasy VII Remake they’ve been demanding. Or, at least the first third of it. Yes, FF7 Remake only cover the first act of the classic game, but Square Enix promises this will feel like a full-sized RPG as they’ve greatly expanded Midgar and added plenty of new character and story moments to experience. Beyond that, the game looks to have been polished to the Nth degree, featuring gorgeous visuals and a slick new action-infused combat system. It seems like the wait has been worth it. Pre-order on Amazon.

The makers of Friday the 13th: The Game return with another asymmetric multiplayer showdown that aims to take the action to the next level. This time around the two sides play completely differently – as a Fireteam marine you’ll fire off rounds FPS style, while the agile and resourceful Predator switches the action to the third person. Predator: Hunting Grounds looks to recapture the look and feel of the original 1989 movie, so grab some friends and get to the choppa. Pre-order on PlayStation Store.

Trials of Mana began life on the SNES, but unlike its predecessor Secret of Mana, the game wasn't initially localized for Western audiences. Well, now many will get the chance to try out Trials of Mana for the first time, as the game is getting a full remake. Far more ambitious than the 2018 Secret of Mana remake, the new Trials of Mana features a lavish visual makeover, revamped combat, and all-new post-game content. Obviously most people will be focused on another Square Enix remake this month, but don’t let this one pass you by. Pre-order on Amazon.

The ultra-manly action-packed Gears series gets a little more strategic in Gears Tactics. In the tradition of games like XCOM, take to the battlefield and blast Locust in challenging turn-based combat, which is bolstered by a dramatic story and AAA production values. Here’s hoping developer Splash Damage can pull off a more thoughtful sort of Gears game. Pre-order on the Microsoft Store.

A long-running and beloved series in Japan (where it’s known as Sakura Taisen), Sakura Wars is one part visual novel, one part tactical RPG featuring giant mechs. Basically, you advance the story and assemble your team in dating-sim-style visual novel segments, then you and said team jump into your mechs and do battle. Many of the people who made Sakura Wars went on to make Valkyria Chronicles, so if you like those games, you should keep an eye on Sakura Wars. Pre-order on Amazon.

In Other Waters is an underwater exploration game, except in a unique twist, you don’t play as the diver, but as the AI that guides them. Wccftech’s Rosh Kelly was particularly taken with the game, giving it a 9.5…

In Other Waters is totally engrossing, beautiful and perfectly balanced both in terms of immersive gameplay and intriguing narrative. It's relaxing without being boring, and thoughtful without treading the same tired sci-fi tropes.

Here’s the Steam page for In Other Waters.

Someday You’ll Return is a new mystery-horror game somewhat in the same vein as Layers of Fear or The Vanishing of Ethan Carter, although it looks like it features more actual interaction and puzzle solving than your typical spooky walking sim. Developer CBE Software’s previous game, JULIA: Among the Stars showed a lot of promise, so hopefully this is a scary good time. Here’s the Steam page for Someday You’ll Return.

Help Will Come Tomorrow is a new beautifully-illustrated survival game with an interesting historical edge. The year is 1917 and you play as a group of people trying to survive in the Siberian wilderness in the wake of the October Revolution that eventually gave rise to the Soviet Union. Survival will require you to find food and shelter, but also overcome class conflicts between your survivors. Here’s the Steam page for Help Will Come Tomorrow.

Cloudpunk is essentially Crazy Taxi set in a Blade-Runner-esque neon-drenched dystopia. You play as a delivery driver who has to navigate a huge, vertical cyberpunk city, during which you’ll meet a diverse cast of characters and uncover various mysteries and conspiracies. Cloudpunk could be a nice little appetizer for those who just can’t wait for Cyberpunk 2077. Here’s the Steam page for Cloudpunk.

From publisher Team17, who also put out the fantastic Overcooked, comes a whole new type of “couch co-op.” As the name implies, Moving Out casts up to four players as movers, who have to figure out how haul couches and all manner of other furniture out of houses. Moving may be a drag in real life, but Moving Out looks like a lot of frantic fun. Here’s the Steam page for Moving Out.