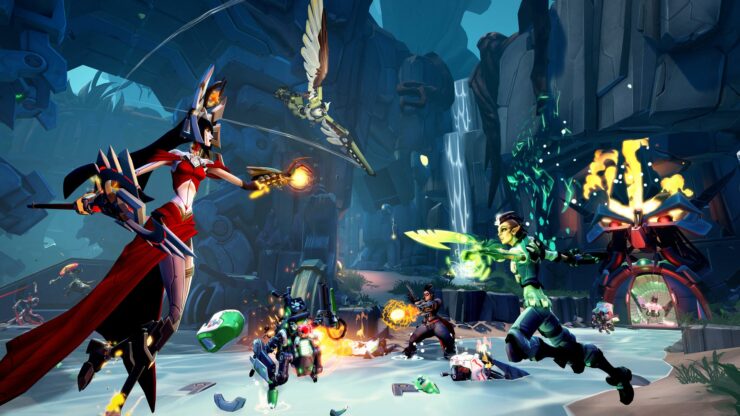 There were rumors of a Battleborn F2P transition happening soon and today, Gearbox announced a free trial that grants unlimited access to all competitive multiplayer gameplay, modes, and maps.

In case you've already bought the game, there's a bunch of stuff waiting for you.

Players who have already purchased and played Battleborn prior to the launch of the Free Trial are now awarded Founder Status and will receive a slew of in-game item rewards including loot packs, credits, an exclusive “Founder’s Crown” Flair item and more. Flair are special pieces of gear introduced with the arrival of the Free Trial that bestow visual components on heroes, such as horns and headwear.

However, Gearbox boss Randy Pitchford challenged the "Battleborn F2P" headlines such as Kotaku's. He explained in a series of tweets, mostly directed to Kotaku's Jason Schreier, that the business model for Battleborn remains retail+DLC and he actually tried to get the game to be listed under the free-to-play section, adding that it would be better for discoverability, but Sony and Microsoft refused.

Pitchford added that he'd like to make a full transition but Gearbox is not there just yet.

Try to find it on 1st party dashboards under F2P. Oh, you can’t? But there’s a demo/trial option that’s free? I see now - demo/trial != F2P.

Trial can be either a subset of content or a limitation on content, which is what we have here. F2P is a ground up business model.

The business model for this game is retail with DLC, not F2P. I have no issue with F2P, but do care about setting correct expectations.

It would actually be better for game if it was under F2P dashboard listing. Discoverability is hampered because it is a trial.

It’s incorrect and makes us/me vulnerable to characterize it as F2P given official classification with 1st party.

I would like to see it exist as F2P, but that’s not where we are. Business model is retail with DLC and that’s the truth and the way it is.

I don’t know if it we can fully transition it. That would be nice if we could. It’s been a lot of work just getting the trial here!

Yes - we hope people buy the retail game. If you browse for it on console dashboard, you have option to buy or to try for free (trial path).

Do note that PlayStation Plus or Xbox Live Gold subscriptions are required if you intend to play on consoles rather than PC. Newcomers also will benefit from an exclusive queue and even brand new Training Modes to learn how to play.

NEW PLAYER EXPERIENCE
New players won’t have to worry about matchmaking against a team with Command Rank 100 and legendary gear out of the gate. With the launch of the Free Trial, we’re also introducing a queue specifically for new players. This queue was created just for new and lower rank players to learn the ropes without being matched with more experienced players. Even if you’re a quick learner or an experienced MOBA player, we wanted to give you enough time to find your Battleborn play style and favorite heroes. Once a player masters Battleborn’s mechanics and reaches Command Rank 20, the Novice Queue will disappear and they be able to join other Battleborn players in the regular queues.
If you’re new to Battleborn, or just feeling a little rusty, take advantage of the new Training Modes, including an Incursion Tutorial to build up competitive multiplayer skills, and The Dojo, where players can test drive all 30 Battleborn heroes against waves of minions, regardless of whether they’re unlocked outside of The Dojo.