I'm a whisky drinker. That isn't a secret to anybody who knows me. While I can't afford the best whisky in the world, I know what's good - or at least what I like - and I'll spend something on it. I'll always treat myself to a good bottle on payday, topping it up with something cheaper during the middle of the month. So it was more than a bit of a surprise when I heard about the news and was sent a bottle of Gearbox and Pernod Ricard's new partnership, Ballantine's Finest Moxxi's Bar Edition, or Moxxi's Finest Blend in real life and in Borderlands.

You often see limited partnerships when something hits a level of high popularity. We've seen Game of Thrones whisky and beer. I remember the Tru Blood orange drink (it was surprisingly nice). Peaky Blinders at least made sense for its partnership and branded Irish Whiskey. Borderlands isn't at its height of popularity, which immediately makes this strange, but another aspect is that this has been described as a long-term partnership. It's got videos and everything. 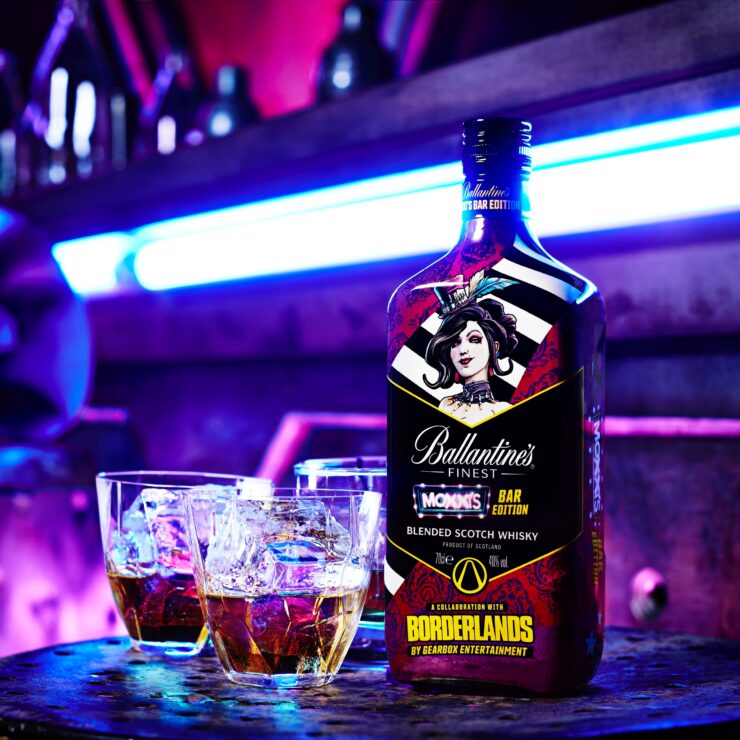 So I have to wonder if this is indeed a long-term move. We'll start with the Mad Moxxi whisky, maybe find ourselves with a Kharak-based soft drink, quenching even the most desert-driven thirsts. Granted, with this being a partnership with Ballantine's, I guess the following announcement - more to be revealed later in 2022 - will be another character's face on another unique blend.

Ballantine’s Marketing Director, Mathieu Deslandes, had this to say:

We’ve been following Moxxi’s adventures in Pandora for some time now and are delighted to have such an infamous entrepreneur on board. Her handling of the Heist of the Handsome Jackpot was second to none and her impressive hostessing of the Underdome Riot is not easily forgotten. I have no doubt Moxxi will help catapult Ballantine’s to galactic heights and encourage Vault Hunters to stay true to themselves.

What I do like about this partnership, even though it's all about whisky, is that the video acts as a PSA about drinking. Take it from somebody who has done their fair share of drinking (including beer for breakfast while on a Wccftech meet); you need to drink water and drink sensibly. Give it a watch below in full Borderlands style.

As well as buying this whisky in the real world on a first come first serve basis, you'll be able to buy it in-game. The Ballantine's website offers a fair few cocktail mixtures to try, and I believe there'll be a few in-game perks for those who purchase a bottle. Buying one in-game will also come with some in-game bonuses. Once I've finally recovered from my recent illness, I think it'll be time to open a bottle of Moxxi's Finest myself because if there's any game that does feel like it works well with Whisky, it's Borderlands; possibly a Nord blend from Elder Scrolls too, but let's stick to what we've got; which includes a recent announcement of Tales From the Borderlands 2.