Samsung Galaxy Z Fold 3 more than exists, and we know that the device will be releasing next year. It seems like Samsung will have a busy 2021 as the company has a portfolio of devices to release. Everything ranging from the affordable devices to the flagships, Samsung will be busy; there is no denying.

Now, as long as the Galaxy Z Fold 3 is concerned, this will be Samsung's 3rd foldable, and the latest tip that we have our hands on talks about how Samsung is claiming that the Fold 3 is going to be not only slimmer but only lighter. The thing with foldable devices is that they are still considered to be from an early generation, so it is only fair that we give them the benefit of the doubt as future phones will be better.

Samsung Aims to Refine the Design of the Galaxy Z Fold 3; Will Also Make Improvements to the Next Galaxy Z Flip

At the Samsung 2020 Investor Forum, Samsung talked about how they will be working on launching a thinner and lighter foldable device, and it is safe to say that it is going to be the Galaxy Z Fold 3, which is suggested to release sometime next year. Obviously, this dinner was hosted for the investors as per the report because all eyes are on Samsung and how they manage to capture the market share and go even further.

Samsung has shared some slides as well, and based on them, the company is looking forward to popularizing the foldable category, which makes total sense as these still have not hit the mainstream standard. 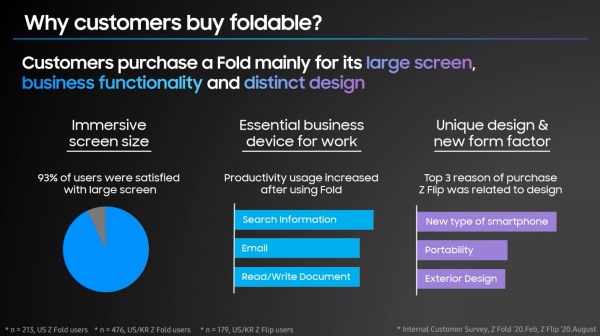 Now Samsung obviously didn't reveal much about the upcoming Galaxy Z Fold 3, but we know that the device is alleged to launch with an under-screen camera and some other enhancements. However, the reduced weight and a thinner overall device have me excited because one of the biggest reasons for me that go against buying a foldable device is that they are pretty thick for what they offer, so a thinner device is definitely something I am looking forward to.