With less than two weeks left until their launch, news and reports for the Samsung Galaxy S10 are surfacing daily. Recent reports for the smartphones mostly serve to corroborate earlier information, but things are getting final especially as Samsung finalizes its launch plans. With that in mind, we've got a new report for the Galaxy S10 today. Take a look below for more details.

Right now, only a few details that are unclear for the upcoming Galaxy S10 lineup. Most of the important factual details for all three of Samsung's 2019 S-lineup variants has leaked, and it paints an impressive picture. Samsung will launch three new gadgets; two of these will succeed the Galaxy S9 and Galaxy S9 Plus while the third will be an entry-level device dubbed as the Galaxy S10e.

Out of the three smartphones, the Galaxy S10e will have the most amount of color options for users to choose from, and the only the Galaxy S10 Plus will be available in a ceramic finish. In an interesting twist, we've got a new 'leak' that claims to show a brand new color variant of the Galaxy 10; one that hasn't surfaced on the rumor mill so far. 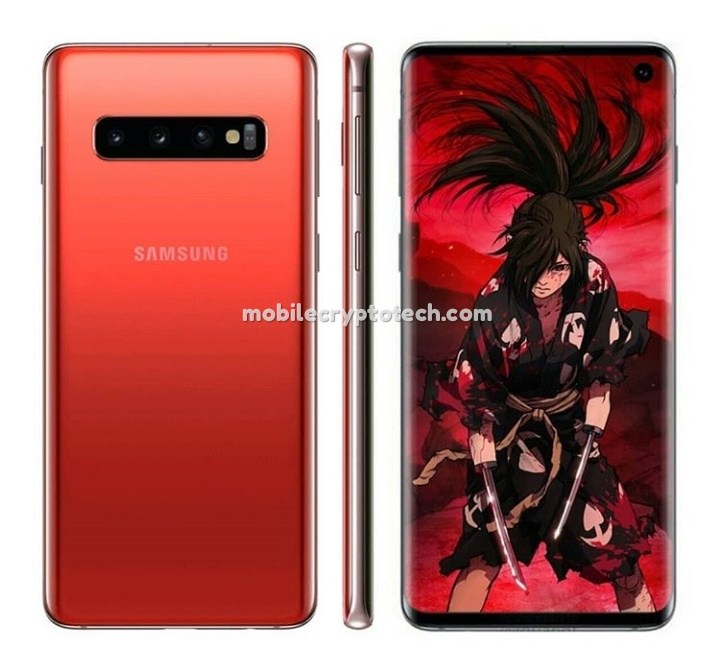 Publication Mobilecryptotech has received a render of a gadget that follows the Galaxy S10's leaked aesthetics, and the site claims that this image is from China. However, apart from mentioning the source's location, MCT does not go into any further details about the image or the source's trust record. Therefore, we're forced to take the image with a grain of salt. Nevertheless, the Galaxy S10 in red will be a very enticing proposition, particularly given the color's attractiveness to the general public due to evolutionary biology.

Samsung might launch a red color variant of the Galaxy S10 later in the year after the initial post-launch pre-orders have been committed to and delivered. It's usually around the middle of the calendar year that market interest in the Galaxy S smartphones starts to wane, and the Korean tech giant might be in for a similar fate this year. However, nothing's set in stone as the S10 smartphones are quite different from their predecessors, especially in terms of design.