After we thought that Chinese tech firms were the only ones that were seizing to cash in on the smartphone market, in comes Fujitsu, a Japanese tech company that we have grown accustomed to with their laptops and other machines. However, the tech giant has branched out its products to another category; smartphones. Arrow NX F-04G is the company’s latest offering to the tech universe and while the device is currently being targeted to the masses residing in Japan, this smartphone and Vivo X5 Pro share one critical similarity; a Retinal Scanner. Despite all the firepower that Xiaomi Mi Note Pro and the Galaxy S6 Edge duo bring to the table, a retinal scanner is not present in their vast repertoire of features. 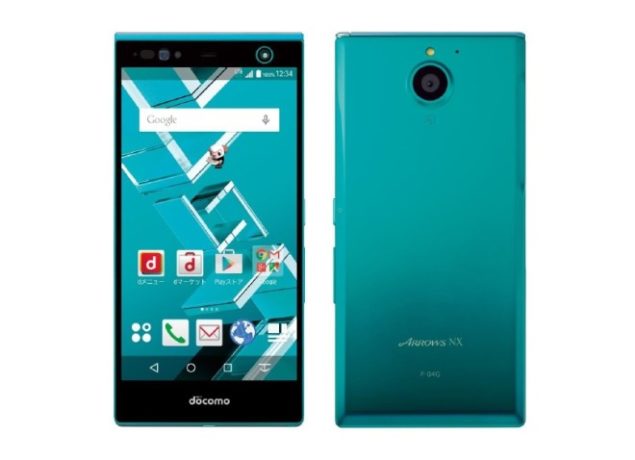 It would have been pointless if Fujitsu’s Arrow NX F-04G featured a retinal scanner like Vivo X5 Pro and not be armed to the teeth with powerful smartphone components. While the handset might be armed with a Snapdragon 810, Qualcomm has been under some heavy fire concerning the overheating attribute of its flagship SoC. The latest revision of the chipset, v1.3, which is currently present in Mi Note Pro, was designed to mitigate the overheating problems. Blog of Mobile was unable to confirm which version of Snapdragon 810 was present inside the smartphone, but if luck is on the company’s side, then they would most like have incorporated the latest version.

In addition, Arrow NX F-04G also features a whopping 3 GB of RAM, 3,120 mAh battery, and an impressive 21.5 MP rear camera that is supplemented by a 2.4 MP front camera sensor. The device itself has a screen size that measures 5.2 inches and renders a QHD display. Wireless connectivity functionality will be taken care by an 802.11 ac Wi-Fi adapter plus a Cat 6 LTE modem. However, the entire highlight of Arrow NX F-04G revolves around its retinal scanner. Fujitsu was not able to comment and what kind of tech was assimilated to the smartphone, but the source states that the company has allied itself with carrier NTT DoCoMo.

The device can use its special authentication functionality method to perform DoCoMo mobile payments. It is kind of like Apple Pay or Samsung Pay, but much much cooler. Pricing details were not revealed by the company or the source, but we are confident that if the smartphone ends up being successful in Japan, it will become available to purchase in other regions.

Galaxy S8 Could Use Facial Recognition to Authorize Mobile Payments

Apple Pay Will Have Meagre £20 Transaction Limit In UK

3S: The $129 Retinal Scanner Smartphone Being Prepped by TCL