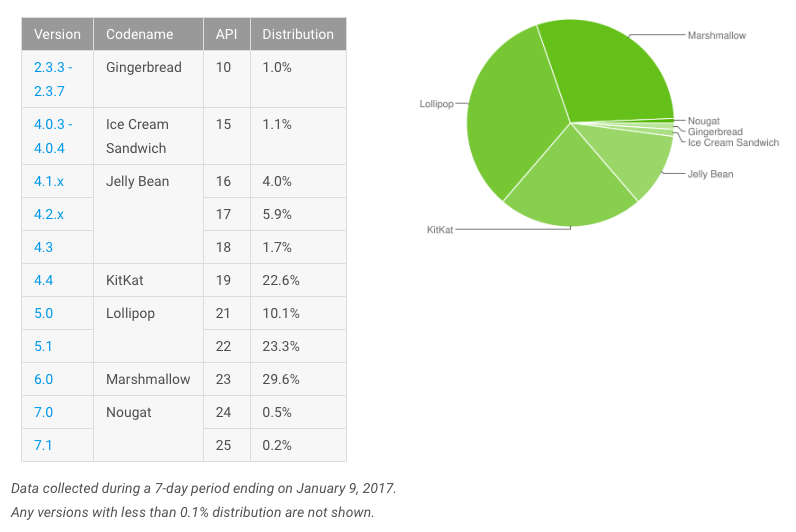 Android 2.2 Froyo has finally bid adieu to the monthly Android Distribution chart. Currently, less than 0.1% devices are running Froyo. Many of you might think that Froyo is too old, and this was long due to happen, but you would be amazed to know that how long Froyo maintained its spot on the chart. Froyo's farewell is a good development, but Nougat's (Android 7.0 and 7.1) slow growth is a point of concern for Google as it is crumbling on less than 1 percent of the total Android distribution.

Google's Android Distribution chart is one of the primary tools used by the developers to ascertain the rate of adoption for Android versions. The chart provides a glimpse of the reach of every version on Android devices all over the world. Froyo had been haunting Google by staying at 0.1%, it refused to give up until today's announcement. The sweet treat was released on May 20, 2010, and since then it kept showing up on the distribution pie chart.

Even though Froyo has vanished from the chart, but its successor Android 2.3 Gingerbread is still holding the fort at 1%. In contrast to Gingerbread's rigid existence, Nougat is still fighting with slow adoption rate that can be comfortably blamed on Google's exclusivity factor for some devices. Many factors are hindering Nougat's potential to reach a significant number of devices.

We wonder how KitKat and Lollipop are still holding a large chunk of the chart with 22.6% and 33.4% respectively. One of the reasons behind the continued adoption rate of KitKat and Lollipop is the availability of cheaper Android TVs that come running older Android versions with no update plan. For the devices running KitKat, Google won't be rolling out any major update and the same could be expected for Lollipop too.

On a brighter side, Android 6.0 Marshmallow has witnessed a jump from 26.3% to 29.6%. We would wait for the next distribution chart to ascertain the future of Nougat as current numbers are disappointing. But then, it is just how Google rolls with its latest Android versions. In the meantime, we do have hope on the upcoming devices to come running Nougat out-of-the-box.

Meanwhile, you can check out this really cool video by Viktor Bohush to commemorate the departure of Froyo.