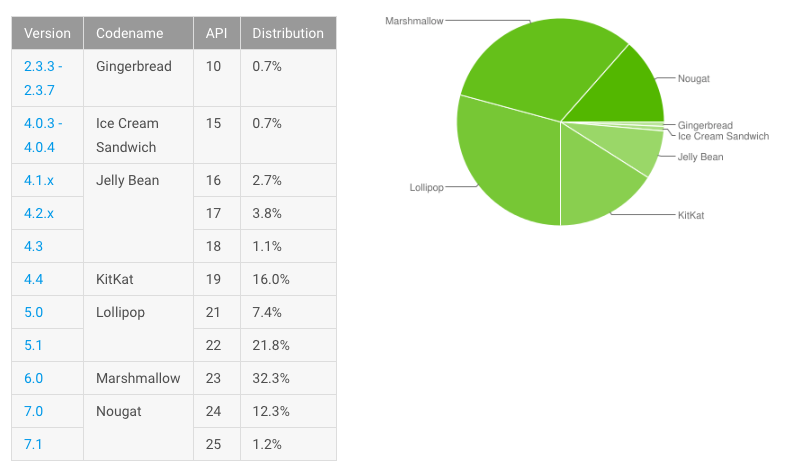 As we inch closer to the public release of the much-awaited Android O, it seems like Android 7.1 Nougat version is slowly catching up with other Android versions on the distribution chart. Google released the distribution stats for August 2017, which is based on the data collected during a 7-day period ending on August 8, 2017. Only the devices running Android 2.2 and above are a part of the data collection for Android distribution numbers. The latest numbers reveal that Android Nougat is now on 13.5 percent of active Android devices.

Rest of the figures reveal that Android 6.0 Marshmallow now dominated 32 percent of Android device and continues to claim the largest share on the pie chart. On the contrary, Android 5.1 Lollipop runs on 21.8 percent of total devices, which marks a significant drop from last month where it dominated 30.1 percent of the devices.

Android KitKat witnessed a share of 16 percent on the chart, which marks just 1.1 percent fall from previous month's share. Android JellyBean still runs on 7.6 percent of total devices while both Android Ice Cream Sandwich (version 4.0.3-4.0.4) and Android Gingerbread (version 2.3.3-2.3.7) have a share of 0.7 percent each on overall active Android devices.

Google is now gearing up to launch Android O, and the company has already shut down its Android Nougat Beta program. Android O's final Developer Preview has already been released and is now at the last stage for the developers to update their apps accordingly.