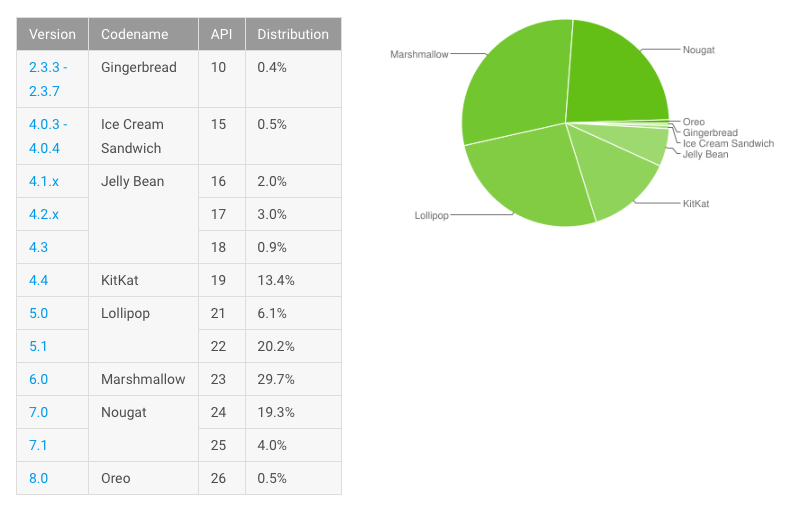 It's been several months since Google released Android 8.0 Oreo and as is the case with latest Android versions, Oreo also seems to be struggling to reach a good chunk of active Android devices. It is further confirmed by the Android Distribution numbers for December depicting the current state of Android versions and their reach overall. While Nougat continues its rise, Oreo shows minimal growth as it only dominates 0.5% of devices.

Even the 0.5% devices on Oreo are mainly populated by Google and Nexus devices. All this means that Oreo only climbed two-tenths of a percentage from last month's distribution stats. While Android 8.1 is already out, Android 8.0 Oreo is no more the latest and greatest in Android anymore. Nougat has shown a significant rise though as other older versions have declined.

OEMs like HTC, Sony, Samsung, and more are beginning to update some of their devices to Oreo, but the process will take some more time before starting to reflect on the Android Distribution chart. Talking about OEMs pushing Oreo updates, HTC recently pushed it to its HTC U11 and U11 Life while Sony extended the update to its Sony Xperia XZ, XZs, and X Performance smartphones. Meanwhile, we have already reported about the manufacturers like LG, Essential, Samsung, and OnePlus who have been running Oreo beta programs and will soon roll out the final updates.

It will not be wrong to expect that the next Android Distribution number may show some increase in the Oreo percentage as more and more devices continue to get the update. Meanwhile, Android 7.0 Nougat registered 1.7 percentage growth to 19.3%, and Android 7.1 increased to 4%, the combination of both the Nougat versions gives us 23.3%, i.e. 3.3% growth from last month's 20.6% overall growth. But, Nougat still has a long path to tread for competing with older versions like Marshmallow and Lollipop.