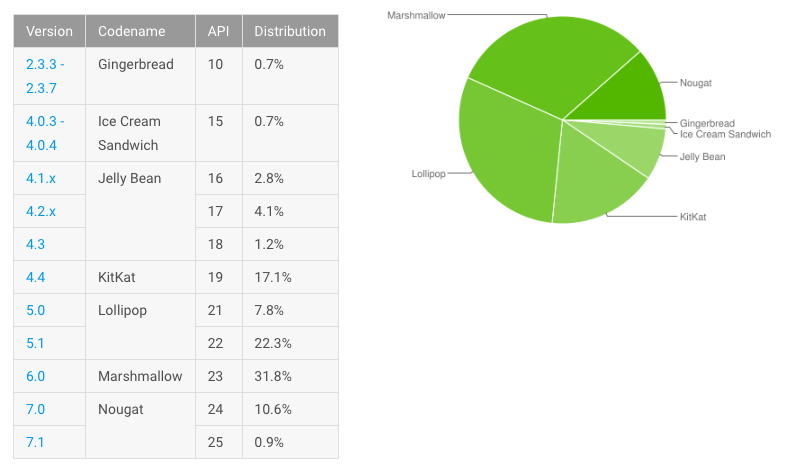 Android devices launched by OEMs like OnePlus, Motorola have contributed to the growth of Nougat. Motorola has an event planned for the end of this month, and we should see a slew of new devices marking the horizon. Meanwhile, other OEMs are also pushing updates for their existing devices. With this ongoing trend, we can predict the further growth of Nougat on the distribution chart.

Regarding other Android versions on the chart, Android 6.0 Marshmallow grew by 0.6% making a total of 31.8% while Android 5.0 Lollipop slipped from the position of most used version - it now runs on 30.1% of devices. This makes Android 6.0 Marshmallow the dominant version. KitKat now runs on 17.1% devices while Jelly Bean powers 8.1% of active Android devices. Lastly, Ice Cream Sandwich and Gingerbread now run on 0.7% of devices.

It remains to be seen how many manufacturers push Android Nougat update this month. If July witnesses more update rollouts then we can expect the next distribution chart to have better stats for Nougat’s presence on active Android devices. On the brighter side, KitKat registered a substantial drop this month. Although it still dominates a big chunk but is on a downward slope. Similarly, Gingerbread also continues to fall after recording growth in May.

Google compiles the numbers from the number of Android devices that used the Play Store in a seven-day period until May 2. Well, it is good to see that the latest versions of Android are claiming a bigger share on the distribution chart. However, it is a long road towards widespread adoption of new versions, something that Google needs to work on.