Some users have reported that jailbreak process gets stuck giving a Configuring system 2/2…. error during the jailbreak process on iPhone, iPad or iPod touch. Seems like evasi0n 7 error is being most encountered with rather slower machines. However, since minimum system requirements haven't been shared by team evad3rs, we have to look for some other fix rather than worrying about what specs we should actually have.

@pod2g: @brittagus told us that some people were stuck on the 'configuring system 2/2' step. It's possibly because of a slow machine. Try on another 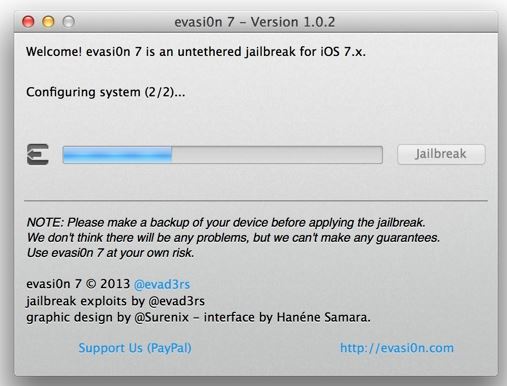 Pod2g suggest using a faster machine for the jailbreak process. Users are reporting that they are using machines that should be capable of this task. It could be that you have RAM with not enough free space, or running a Virtual Machine could also be an issue.

@starmega5: @pod2g How about the app getting stuck on configuring files 2/2 while jailbreaking a 5S

@pod2g: @starmega5 as I said few mins ago, the solution is to try on a faster computer. A race condition is used at that step, and it requires speed

Also, check if your system is running too many apps or programs eating up system resources. Try to end such programs before running evasi0n 7 jailbreak on your device. Another fix of configuring system 2/2 is reboot your system before starting the jailbreak process.

We hope that these tips will help you smoothly jailbreak your iOS 7 devices with evasi0n 7 and fix Configuring system 2/2. Let us know if you found any solutions to this problem too.

iOS 7 Jailbreak: How to Speed up Older iDevices with Top iOS 7 Tweaks