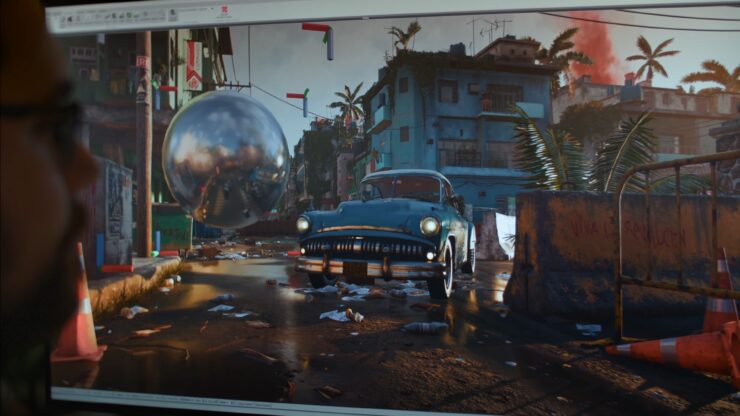 An off-screen capture right after the mention of ray tracing in the video.

Whereas Watch Dogs: Legion saw Ubisoft partnering with NVIDIA, Far Cry 6 (just like Assassin's Creed Valhalla before it) is an AMD-partnered title bundled with the purchase of Ryzen Series 3000 or 5000 processors at select retailers; you can read more about the offer here.

The game was recently featured in the fifth episode of the Radeon RX 6000 Partner Showcase series of videos. In the video, Oleksandr Polishchuk, Senior 3D Programmer at Ubisoft, revealed that Far Cry 6 will feature ray tracing (though he did not specify which effects specifically), Variable Rate Shading (VRS), and FidelityFX Contrast Adaptive Sharpening (CAS). Polishchuk also namedropped Asynchronous Compute, though that is one rather ubiquitous feature in games at this point in time.

We've worked together to ensure smooth 4K visuals experience. This requires a lot of memory bandwidth, and the Radeon RX 6000 with Infinity Cache can easily handle this while keeping frame rates high.

One of the new features of AMD GPUs is DXR ray tracing, which models rays of light more closely to what happens in the real world. This involves complex computations and AMD GPUs can deliver that with no problem delivering stunning visuals. FidelityFX Contrast Adaptive Sharpening gives a cleaner and more detailed image without impacting performance. Async Compute allows AMD GPUs to process graphics and compute workloads simultaneously, maximizing hardware utilization and giving players more performance.

Far Cry 6 will also support 'Hybrid SSR', according to the video's description, which we reckon should be a reference to FidelityFX Stochastic Screen Space Reflections (SSSR). Given the presence of SSR and the simple fact that Far Cry 6's Cuba-inspired setting doesn't exactly lend itself in the best possible way to showcase reflections, the ray tracing effects used in this title could be geared towards shadows or ambient occlusion instead. Let's just hope they're not 'timed exclusive' for one vendor as those of Godfall or Cyberpunk 2077, though.

The sixth main entry in the Far Cry franchise has been listed last week for a May 26th, 2021 release, though Ubisoft did not confirm that in an official capacity yet. In related Far Cry 6 news, the game has been confirmed to target 4K and 60 frames per second on Xbox Series X and PlayStation 5 consoles, which makes us hopeful for smooth performance on PC as well.

Far Cry 6 Won’t Have a Map Editor, Though Devs Confirm an ‘Endgame’ of Sorts

Far Cry 6 Won’t be a Cyberpunk-Like Mess on PS4/XB1, Footage to be Shown Pre-Launch