With numerous other gaming controversies and now the disastrous launch of Assassin’s Creed Unity, this year has fairly been a hard run for Ubisoft. Though it looks like the company might be able to finally please its fans by putting some things back in place with its upcoming action-adventure open world first person shooter video game known as Far Cry 4, which, if reports from early adopters are to be believed, seems to have been well optimized on the latest consoles and specially on PC, unlike the previous two triple A video game titles by the developer. 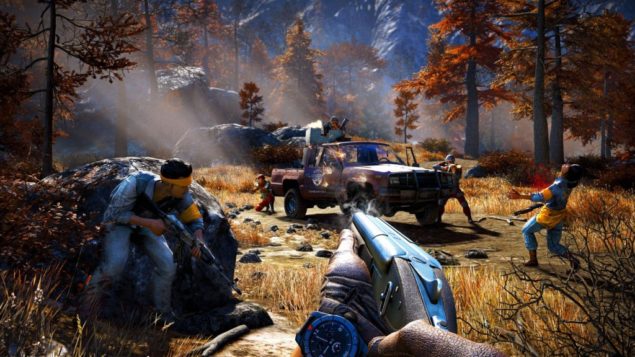 The review embargo for Ubisoft’s Far Cry 4 has lifted (but you will have to wait until Monday for PC reviews to pop in) and the high scores show that the latest shooter is apparently the company’s retrieval from all the previous encircling mess. Besides the console versions of the game, fans are eagerly waiting to see how the upcoming blockbuster title specifically performs on PC, taking that a couple of most talked about games that Ubisoft launched this year were full of performance issues due to uneven and jerky optimization.

Quite surprisingly, reports from those who have already gotten their hands on the PC version of Far Cry 4 also suggest against the game being terribly sluggish and optimized below par. The latest shooter was always expected to be an admirable game just like its predecessor but after previous mess, it wouldn’t have been a surprise if the game had had come with messed up optimization and other performance issues on PC. It seems like Ubisoft managed to stabilize the PC iteration as much as it could.

Some early reports can be found on Far Cry’s subreddit. A user, known as dylanroo, also shared his experience. According to him, the game is well optimized and ran like butter on his PC, despite the fact that he was running it on an Intel Core i5 3470 and 8GB of RAM with Nvidia Geforce GTX 660, which isn’t as powerful as the officially recommended GTX 680 graphics card (you can check out Far Cry 4’s system requirements here). He stated:

Alright, so I got Far Cry 4 on PC. Let’s get the obvious out right away: I torrented it. After the abysmal disaster that was Assassin’s Creed Unity, I had to try before I buy, and oh dear Lord, is it optimized.

I have to say, there are a lot of options. The settings look a lot like Far Cry 3’s, but what surprised me was that it runs like butter.

PC specs are nothing too special, medium-range card with a decent processor.

I can run a lot of settings on high. I turned shadows and water to medium with textures up to ultra.

You have 3 different options of ambient occlusion: SSAO, SSBC, and HBAO+, but it seems that the last two are a bit broken at the moment because the shadows turn solid black.

The lighting is amazing, set it to ultra with Nvidia godrays on.

I played through the prologue, getting at least 45-50 fps in open space and 60fps during firefights and in buildings.

Dylanroo was also kind enough to post a bunch of screenshots showcasing Far Cry 4’s settings menu on PC. The game has a lot of options that can enhance the in-game experience. Players can adjust textures, lighting, foliage, Post FX, Water, lighting, terrain, and toggle Nvidia effects including Fur, Volumetric Fog, Shadows, Anti-aliasing, Environment, and Godrays. You can check out the settings menu in the screenshots below.

Far Cry 4 looks beautiful and almost alike on the PlayStation 4 and Xbox One consoles as well. You can check out a side-by-side 1080p video and screenshot comparison of the game running on both the consoles here. What do you have to say about Far Cry 4’s PC optimization and overall graphical and technical performance? Share your thoughts in the comments section below.