One of the big announcements at this year’s Ubisoft’s E3 press conference was that the all-time cherished video game series known as Far Cry is swinging back into action with Far Cry 4, an upcoming action-packed open world first-person shooter that takes the fun-filled gameplay of its predecessor, Far Cry 3, and presents it in a more engaging way to users by add more life to it. The upcoming game features vast, dynamic in-game environments, and next-gen graphics and textures, you can check some of these elements out in the new direct-feed high quality 1080p gameplay footage that has been taken from PlayStation 4 version of the game. 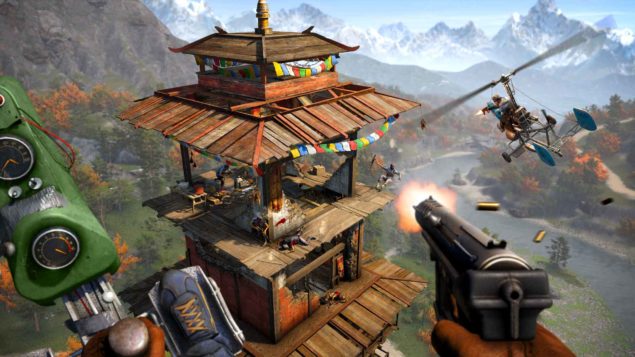 Ubisoft’s upcoming action-adventure open world video game title called Far Cry 4, which can easily be counted among some of the few most highly awaited next-gen triple A major video game titles of this year, is launching next month, and the amount of gamers looking to buy a copy of the game on the day of its release is already very high. Not only the game features far-reaching open-world geographic environments and engaging gameplay, it also comes packed with an interesting story where you get to play Ajay Ghale, who is a Nepalese native who returns to Kyrat, an untamed region in the Himalayas, only to see himself caught up in a civil war under the rule of self-appointed, ruthless king Pagan Min.

Far Cry 4 delivers the most immersive and engaging gameplay Far Cry experience ever in an entirely new and massive open-world that is filled with new weapons, vehicles, wildlife. You can check out for yourself and see how the game looks in this direct-feed high quality 1080p gameplay footage that has been captured from PlayStation 4 version of the game by YouTube user RajmanGaming HD at an event that was organized by Ubisoft in Paris.

The two Far Cry 4 gameplay videos showing dynamic in-game open world and racing have been shared below. It is worth mentioning here that the footage is from a build of the game from last month, so it might contain glitches and bugs that the developer will hopefully get rid of before the game’s launch.

Far Cry 4 will land on PC, PlayStation 4, PlayStation 3, Xbox One and Xbox 360 on November 18, 2014. The game’s director recently explained why 60fps isn’t good for the game, and talked about the Xbox One version, you can check out the complete story here. Stay tuned for more info on the game.