Journey to the Savage Planet Hands-On Impressions – What a Strange Trip! 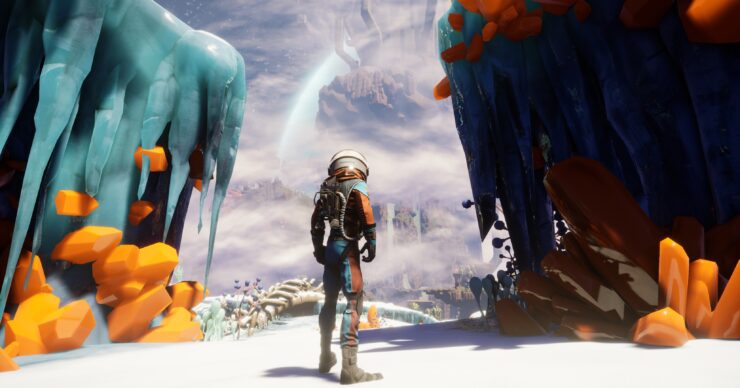 Not surprising to those that have been to this year’s E3, but the majority of appointments I had set up involved behind closed doors meetings and watching presentations. Suffice it to say, any time I could actually get hands-on with a game at E3 2019, that would make a much stronger impression. During my visit to 505 Games’ meeting room in the upstairs alcove, I had the pleasure of sitting down to check Journey to the Savage Planet, the inaugural title from Far Cry 4’s and Assassins Creed III's Creative Director Alex Hutchinson and his newly founded team at Typhoon Studios.

Journey to the Savage Planet, despite the naming conventions being steeped in the makings of a great space exploration title, is incredibly grounded in, well, one singular planet. As a member of a megacorporation that prides itself as being the fourth best, your mission is to step down into the untamed wilderness and catalog whatever flora and fauna you stumble across. In your right hand is a pistol for times when the ravening fauna gets a bit close. It isn’t particularly impressive by any means but can get the job done and even be upgraded with some charge shots and other combative enhancements. In the other hand can be a variety of other tools depending on the situation at hand. I only found big hunks of synthetic meat (Grob) to throw out and distract enemy animals while my main quest sought to have me develop a grappling hook to traverse the points where the main character’s double jump just wasn’t enough to reach.

Talking With Raccoon Logic – AAA to Indie, To Stadia and Back To Indie

From my brief hour of gameplay, Journey to the Savage Planet is already a proper contender for how I wish No Man’s Sky could’ve unraveled once you dropped into the atmosphere. Sure, Journey’s combat isn’t intended to be anything in depth or genre-defining, but it’s perfectly suitable for the game. If there’s an optional mode to just enjoy the game with your wits and resources instead of having that gun strapped into your right hand, I’m sure that I’d find Journey to the Savage Planet just as enjoyable.

Since your core mission is to Journey to the Savage Planet and catalog the local wildlife, that’s the primary objective of your afternoon adventure. If you’ve played Metroid prime, that same joy of scanning anything and everything that sticks out is at play, usually with some sort of snarky comment from your AI companion. I could’ve sworn I spent at least ten minutes of my hour-long appointment just watching the bizarre infomercials for the various in-world products that Kindred Aerospace produces.

Journey to the Savage Planet is by no means intended to be a full length, serious shooter. For half the price, you get a comedic romp through alien landscapes, exploration at your own leisure, and some memorable opportunities to field goal kick the local wildlife just to see how far they can fly. It’s also intended to be completed in a few afternoons, or if you’re a working adult with a family, a couple of weeks of playing an hour each night.

Journey to the Savage Planet is set to launch in Early 2020 for PlayStation 4, Xbox One, and PC.