Ubisoft apparently holds most of the shares in this year’s list of major triple A video game titles as the developer has already released one of the most anticipated game of 2014 and more are waiting in the queue, and among those games is Far Cry 4; an upcoming action-adventure open world first-person shooter video game that is a sequel to 2012’s hit title called Far Cry 3. Following last week’s reveal about Far Cry 4 running at 1080p/30fps on PlayStation 4, Ubisoft recently explained the lack of 60fps at 1080p and talked about how the game won’t be affected by Call of Duty: Advanced Warfare and Halo. 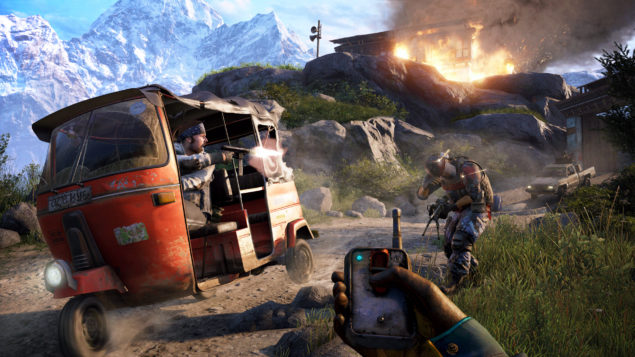 Far Cry 4 Creative Director Explains Why 60fps Isn't Good for the Game - Talks About How the Xbox One Version Looks Like Compared to PS4 Version, and More

Successor to one of the most ambitious and remarkable action-packed first-person shooter video game of 2012, Far Cry 4 is a game that you will definitely want to spend your bucks on. Set in a wild region of the Himalayas, the game features dynamic in-game geographic environments and a vast array of weapons, vehicles and wildlife that is related to the game’s exotic setting. Unlike most other first-person shooter games that focus on confined assignments, Far Cry 4 will offer a wide variety of jobs and free roam exploration that will keep players busy for hours.

Far Cry 4 is a uniquely distinctive title compared to other first-person shooters, but still, the upcoming game is releasing right when big games like Halo: The Master Chief Collection and Call of Duty: Advanced Warfare will be making their way to the top charts. That means the game will have to face a stiff competition, but it looks like Ubisoft isn’t worried much about that. In a reply to a fan’s concern about how the game will perform on the charts while competing with other top first-person shooters, Far Cry 4’s Creative Director Alex Hutchinson reassured that based on previous experience, the game will do just fine.

@ShotbyRon @Lillestoel @LegacyZ3RO All three of those games (us included) have released alongside each other before and we've all done fine.

Explaining why Far Cry 4’s 1080p resolution and 30 frames per second lock on PlayStation 4 is in the best interest of gamers, and how 60 frames per second would require the development team to make many sacrifices in key aspects of the game, Hutchinson said that for 1080p/60fps, the development team would “have to simplify the art, have less people or events on screen or make other sacrifices."

@dj_backbreaker @fender211pi We'd have to simplify the art, have less people or events on screen or make other sacrifices.

Furthermore, replying to a fan who asked for the resolution and frame rate for the Xbox One version of Far Cry 4, Hutchinson said that the game’s PC and console specifications will be revealed in detail very soon. When asked how does the Xbox One version of the game look like compared to the PlayStation 4 version, he replied saying, "Identical, don't see any difference."

,@Turkishflavor We will announce all PC and console specs in crazy detail very soon: no point restricting it to twitter. XBone looks great.

@ShaikhSehran I would say identical but then some asshat would say a tree had one more leaf on xbone. So let's say I don't see a difference.